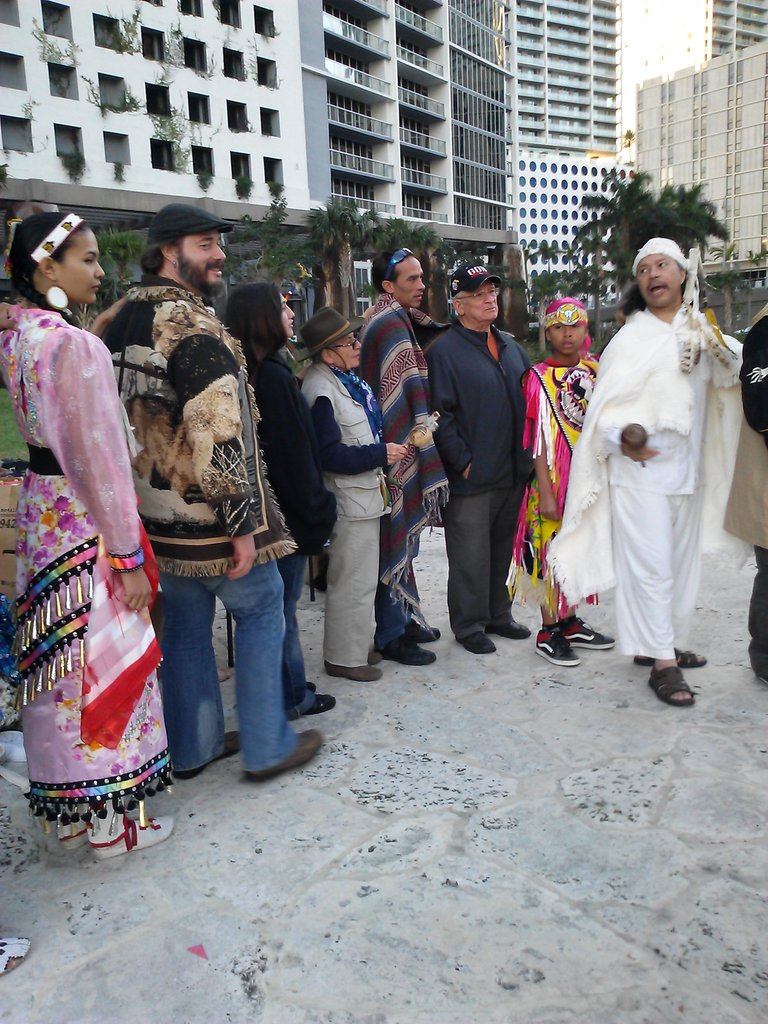 A group of Tainos and other friends gathered at the sacred site of the ancient Tekesta Indigenous people, relatives of our Taino ancestors in the heart of the city of Miami, Florida, this past Friday, on the Maya calendar date 4 AHAU (December 21st 2012) to celebrate the grand SHIFT OF WORLD AGES. We bid goodby to the fifth and final sun-epoch of the former era and welcomed in the first sun-epoch of the new era.

The event was jointly sponsored by the UNITED CONFEDERATION OF TAINO PEOPLE and the CANEY INDIGENOUS SPIRITUAL CIRLE through its special division, the Maya-Taino Prophecy Initiative.

According to the ancient Maya sages, an enormous period of 260 centuries of human consciousnes evolution divided into five distinct 52-century long sun ages of transition ended on Friday and a new cycle of 260 centuries was initiated with the opening of a brand new 52-century sun epoch, the first in five which we trust will carry humanity through a glorious period of consciousness regeneration. 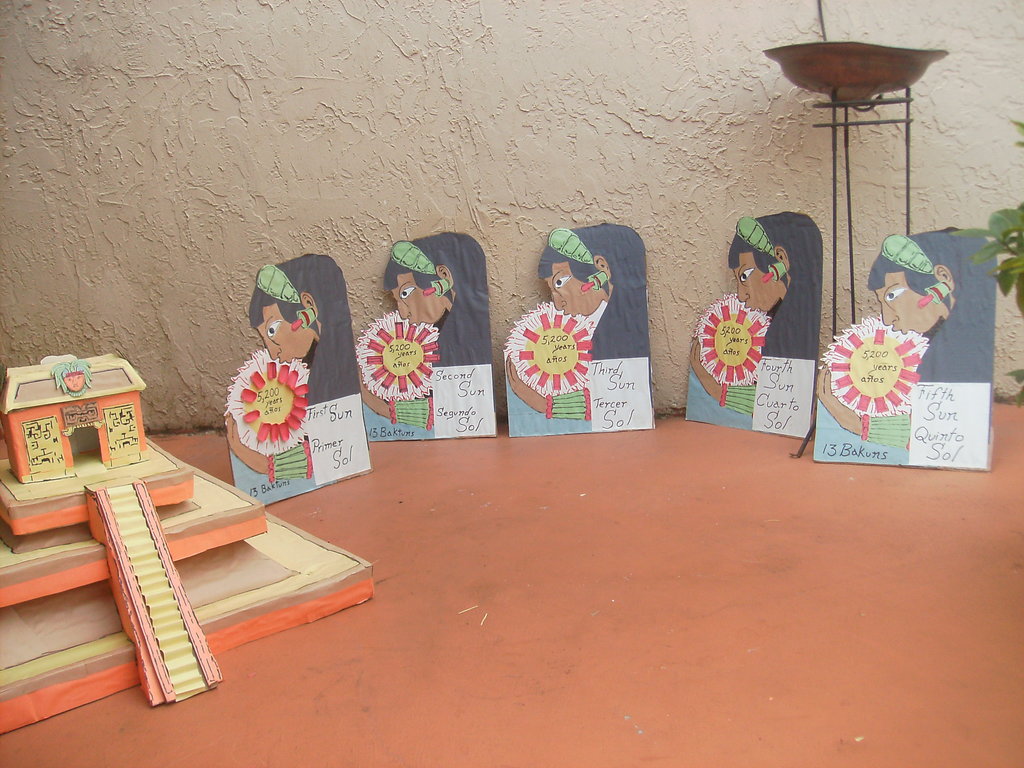 Our celebration was attended by Tainos and other friends from all over the state of Florida and from places as far away as the Cree Native reserve of Kehewin in Aberta Canada. 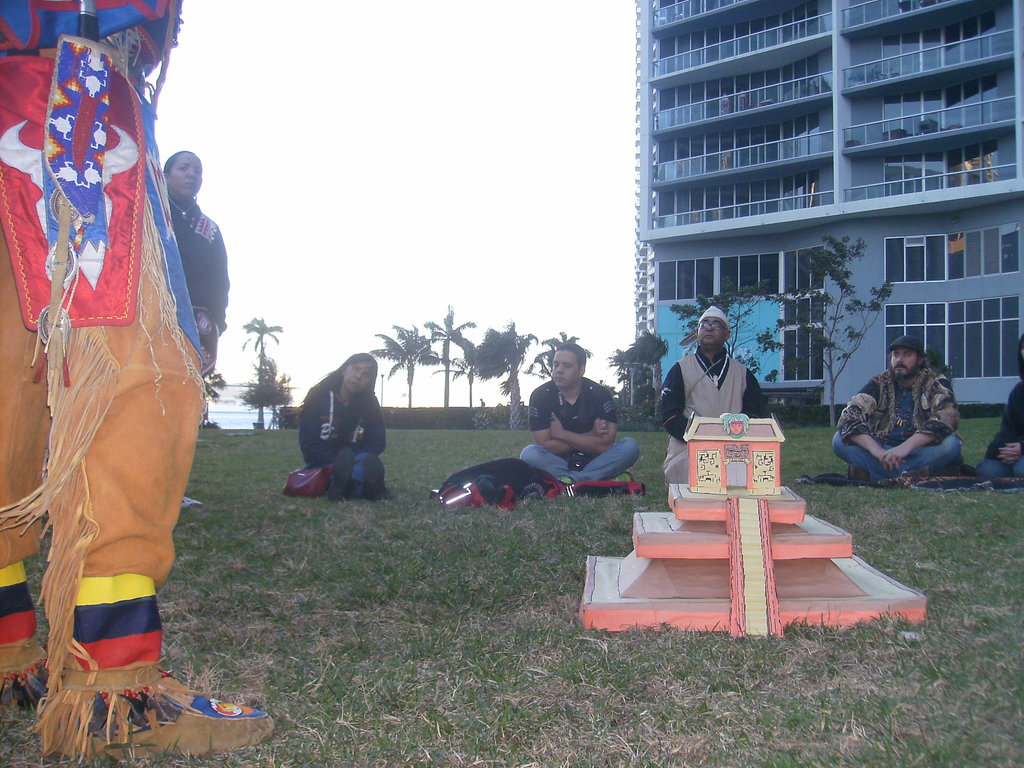 It was for me an honor to officiate this event in the unusually chilly 40 degree weather that swept down on the region on that day. In spite of the cold wind-chill factor breeze that blew in through the high-rise buildings of down-town Miami from Biscayne Bay, we were warmed by the message of hope and joy that our Maya relatives have shared with us in regard to this date.

I made full use of the great gift of art and symbolic media to convey the powerful message of this moment, explaining first to my friends gathered there the intricate mechanics of the Maya Calendar Long Count with its system of 360-day tuns (which I like to call "near-years") and its twenty-tun long katuns, and its twenty-katun long baktuns and its thirteen-baktun long SUN AGES. 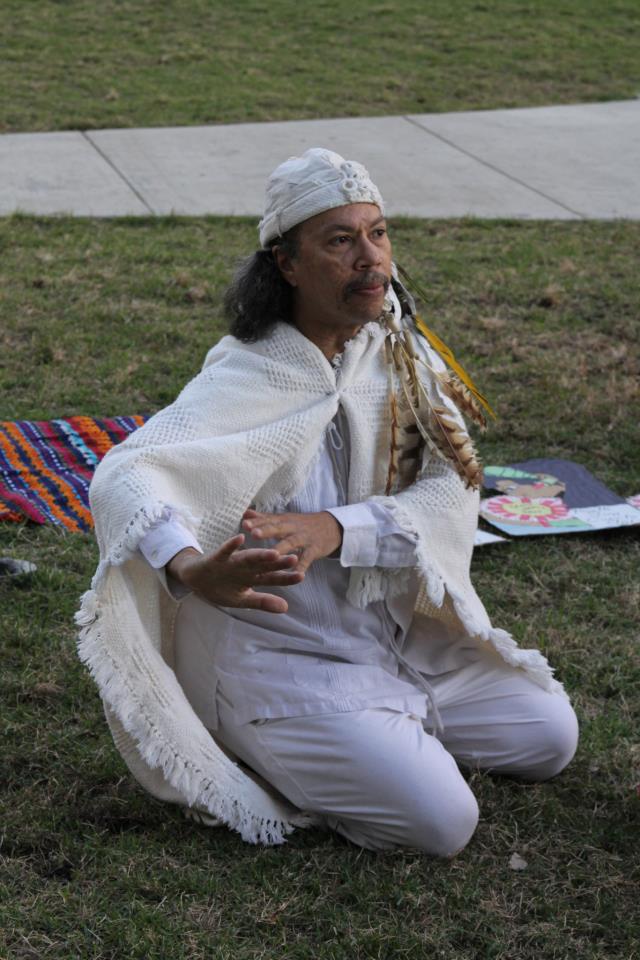 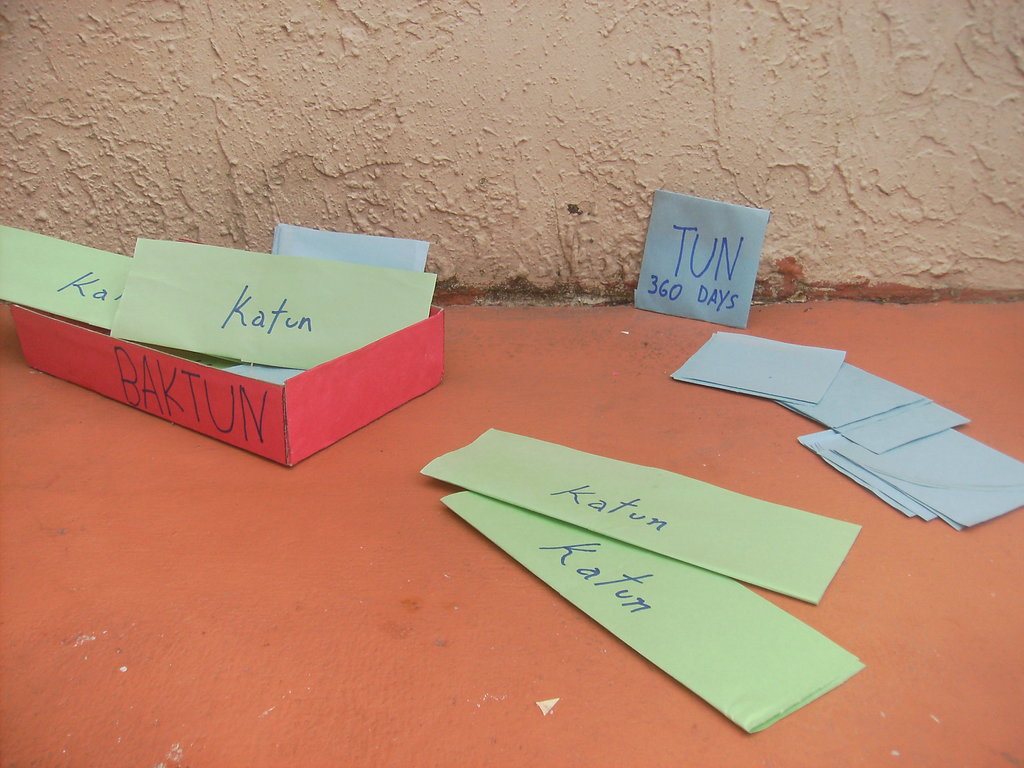 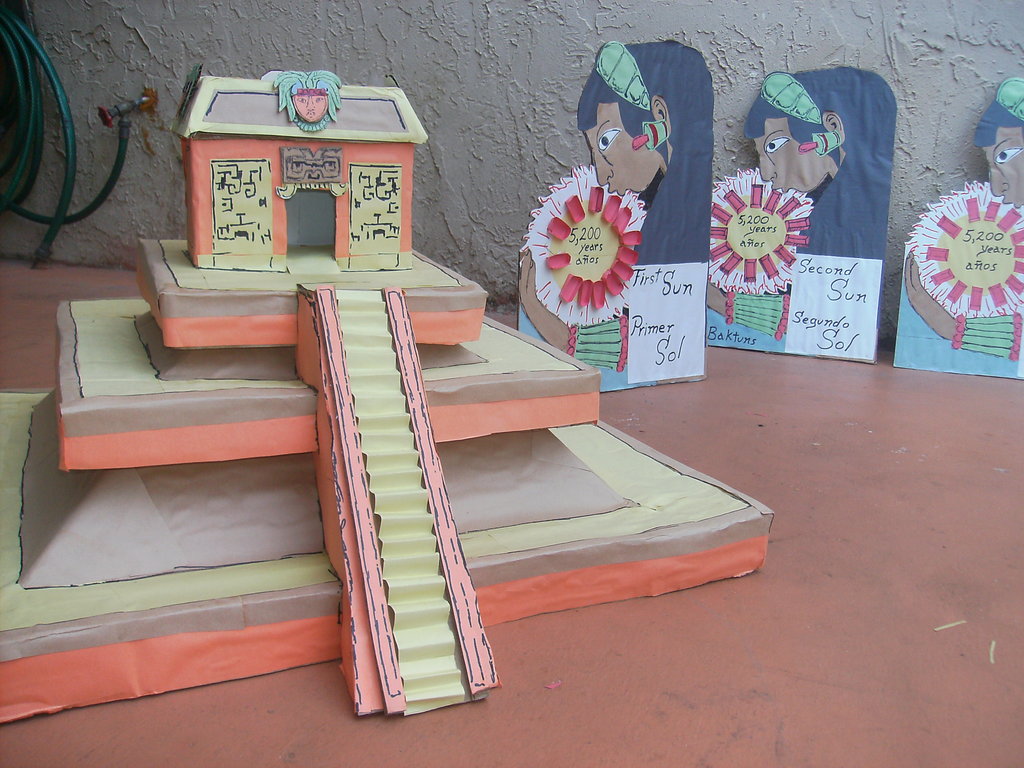 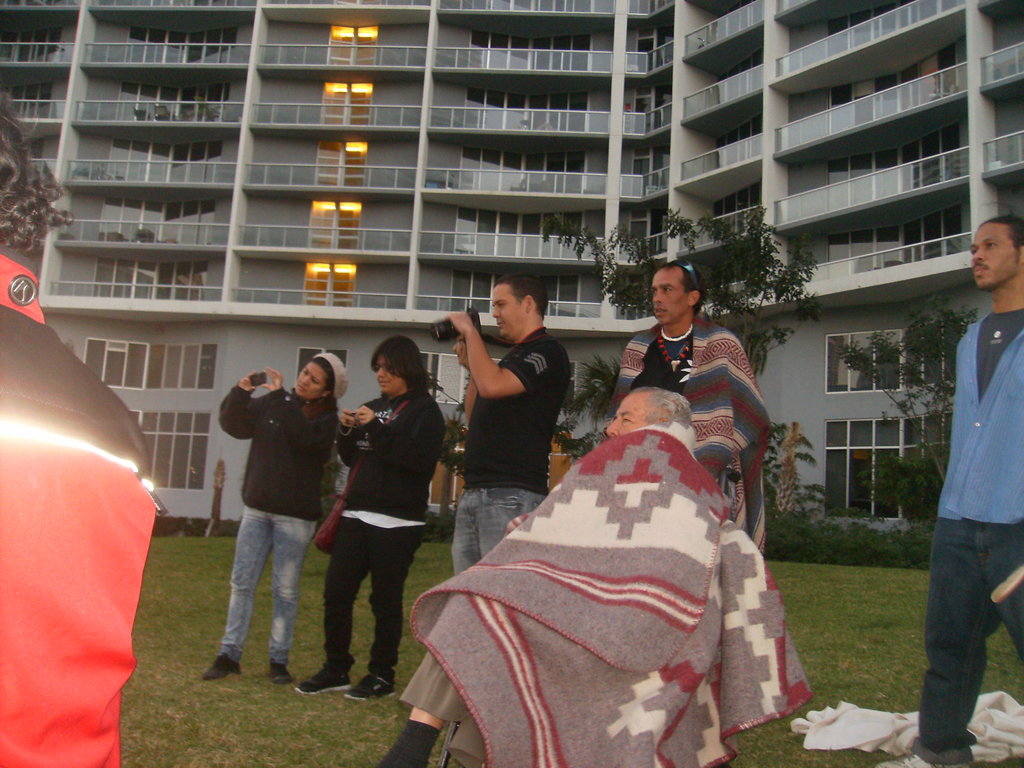 This message, as I have shared on a number of previous occasions, is all about we as human beings recovering our ancient power of expressing the true yearnings of the human soul in the form of our art, through media of all sorts, visual communication, poetry, music, etc. Media and Art was the great gift to humankind that was born at the beginning of the old era 260 ceturies ago as Ice-age humans began to paint on cave walls and began to express their soul in spiritally rich dance, music and poetry. My Maya teachers have shared with me that this was the way that early spiritual expression and shamanism arose. This prescious gift was stolen from us by the manipulators of propaganda 52 centuries ago at the beginning of the fifth and final world age, what is now known as the Fifth Sun. It was used by them to further their agenda of self-agrandizement, selfish appropriation of wealth and armed violence.  We have at long last taken it back away from them now in this the beginning of a new era of change. The reality of this truth was evident all around us at the event as some of us recorded the celebration on digital media to share the wonderful news with friends and relatives, as we discussed subjects of great political, historical and spiritual importance to us humans that have been publicized in the alternative media free from the asphyxiating control of the mainstream propaganda manipulators who have had a strangle-hold on the flow of symbolic communication for so many centuries. Our celebration was indeed a celebration of feedom, rebirth and renewal, held at a site which represents the presence of ancient Taino-related Aarawks right here in the North American continent. The Tekesta people built a beautiful ceremonial structure here centuries ago and sank post-holes into the solid rock beneath the top soil to support their wooden ediffice. It is appropriate that we Tainos now celebrate this great World Age Shift here at this perfectly circular archeological site which has been converted into a beautiful park by the city of Miami. We were pleasantly surprised in the midst of our celebration when our own Kasike Mukaro telephoned us unexpectedly to share the support of New York-based Tainos and the leadership of the UCTP, and the fact that our celebration was shared by them up north.

As part of our celebration we were joined by a brother, Kendal Ray Morgan, who is a resident of Miami and who participated in the mystical event right here at Miami Circle last Wednesday 12-12-12,  on the sacred Kiche Maya celebratory day known as Wajxakib Batz. 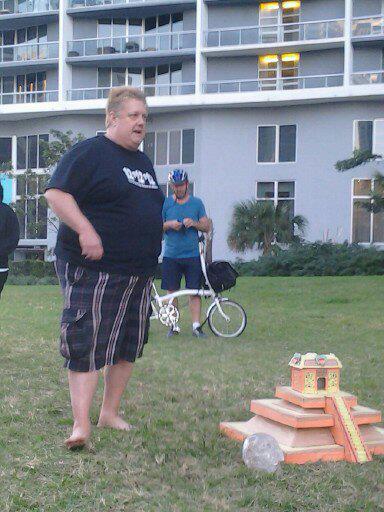 This brother shared with us the message of last week's event here, which among other things featured the participation of world-famous member of the Thirteen Indigenous Grandmother's Council, Grandmother Flordemayo, with whom I have worked several times when she visited my city of residence, Pittsburgh, PA. 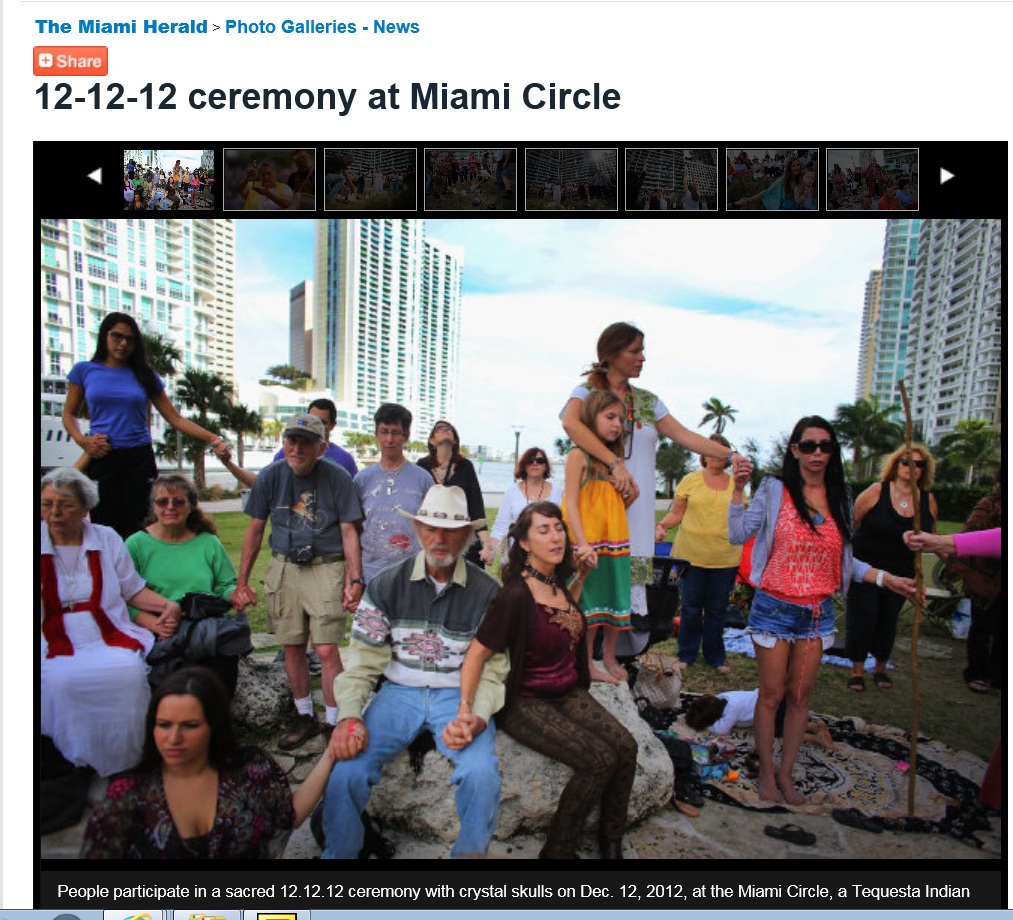 This brother also shared with us one of the many Mexican and Guatemalan crystal skulls that were honored at that 12-12-12 event. 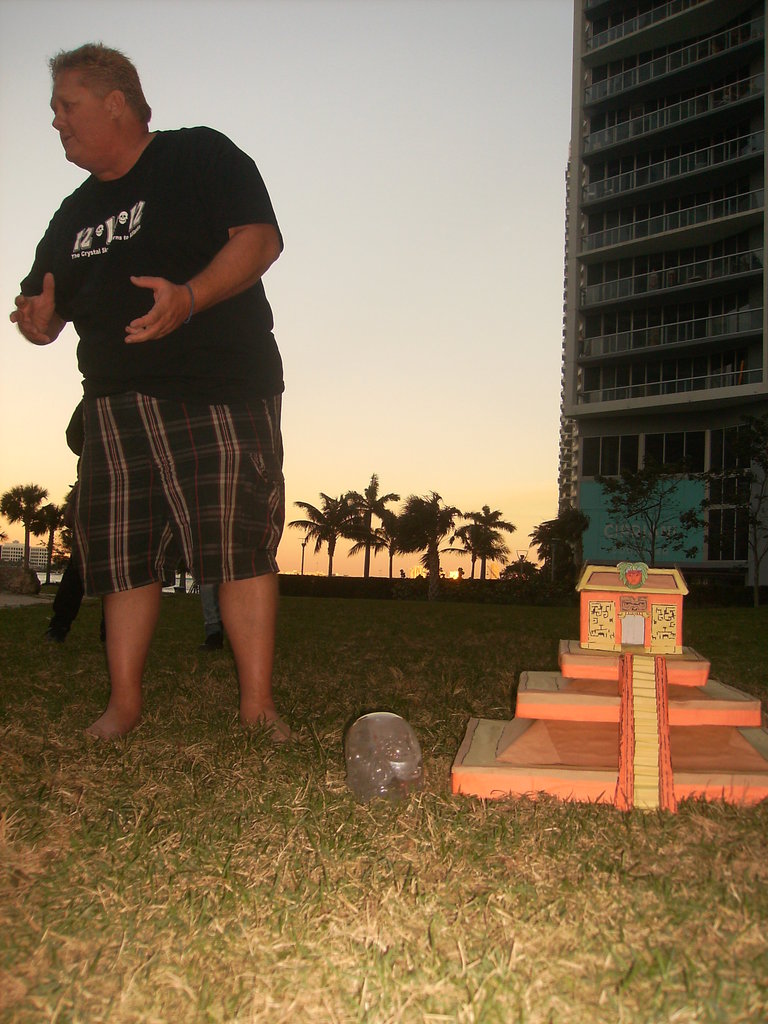 At the end of our event my sister Rosa (Sague) John, who is married to a Canadian Cree, Melvin John, brought us the last word on a topic that our spiritual sister the Canadian Cree Blue Sky Woman and our leader Kasike Roberto Mukaro Borrero had already made us aware of. It is the evil law that the present prime minister of Canada is attempting to pass in his country which would pactically invalidate all of the Native land rights in Canada. The news of this injustice was shared with us by Blue Sky Woman and Kasike Mukaro some weeks ago when they informed us of the hunger strike that tribal leader Chief Spence of Cree reserve Attawapiskat has maintained for 15 days now. The movemnt to stop this outrage in Canada is called "IDLE NO MORE". We were honored in behalf of the UCTP and the Caney Circle to demonstrate our support for the IDLE NO MORE movement that my sister and her family smbolize via a media flash-mob style demonstration at the end of our gathering. 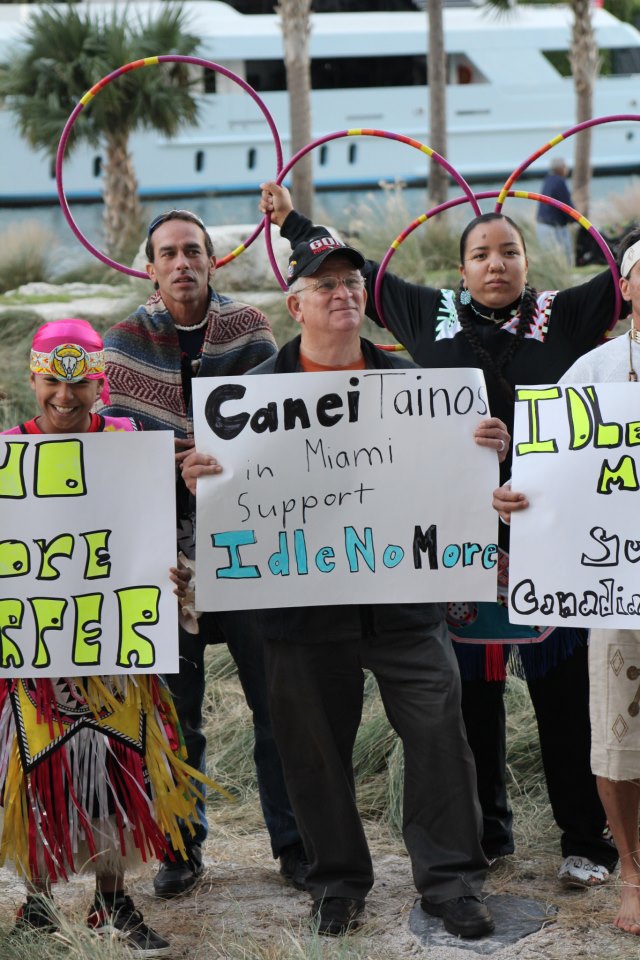 As part of this important demonstration which has become part of a greater world-wide alternative-media-driven movement we were treated to the beauty and artistry of hoop dancer Crystal (Beanie) John, my niece, and fancy-dancer Stryder Tailfeathers, my grand-nephew and son of my niece Monique Diabo. I want to thank my spiritual relatives, both Tainos a non-Tainos, all of those blessed souls that braved the cold Biscyne Bay weather at Miami Circle for joining us and helping make this event the beautiful thing that it was. I especially want to thank my brother Perrito Del Mar and his lady, who brought us some deliscious sandwiches that were shared at the end of the event.  Another special Bo Matun to Rosa and her wonderful family for sharing the power of Canadian Indigenous determination through the beauty, color and grace of Native dance and music. Last but not least a big Hahom to our leader, Kasike Roberto Mukaro Borrero as well as the whole leadership and membership of the United Confederation of Taino People for adding their valuable support to the success of our event in Miami.