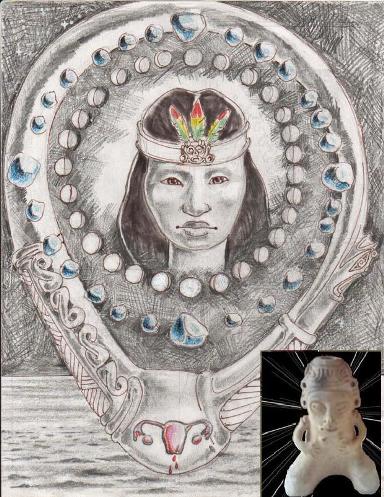 Tau My Relatives
On Saturday May 9 I had the distinct pleasure and honor of officiating a traditional Caney Circle Full Moon Ceremony in Yaoungstown, Ohio at the home of UCTP Ohio representative, Rose Xochitl AnaO. Rose's brother, David, a spiritualy gifted individual joined us with his family which includes an amazing array of beautiful young Taino women and girls. We were also joined by Rose's room-mate Gail. The presence of David's little three-year-old daughter, a vivacious, inquisitive joy of a human being put a marvelous cap on the overall sense of joy that surrounded us throughout our ceremony. The evening was filled with the magic of conversation, great food prepared by Rose (she made Cuban black beans and congri in my honor), music (Gail and Rose honored us with a beautifully harmonized duet concert of sacred music which was followed by another concert offered by David's daughters). David's incredibly talented wife demonstrated her unique ability by sharing with us the awesome regalia that she has crafted for her daughters.

The focus of our ceremony was the connection between the 28-day lunar phenomenon which we were celebrating at that moment and the sacred ability of our cosmic mother, Ata Bey (Mother Earth) to birth and support life. We discussed in prayer and ceremony, the connection between Ata Bey's monthly cycle that manifests itself in the lunations of the moon and the parallel monthly cycle of human women which manifests itself in the mentruation of the human womb.

It was important for us to call attention to the happy coincidence that this month's Full Moon Ceremony falls on the day prior to Mother's Day underscoring the connection between the divine mother and the human mothers. We made the sacred connection between the fact that the monthly cyclic moon affects and influences the rise and fall of the sea's tide. The sea is, in effect the "blood" of the Earth Mother. Likewise the monthly cycle in human women manifests itself in the rise and fall of the menstrual blood, a fact higlighted in a book written by Caney Spiritual Circle guide Guaba Guarikoku in her book "Songs of Bleeding".

We kept in our prayers all of the mothers of our people, those that were still with us and those that are in the realm of Koa Bay (abode of the ancestors). We offered a special prayer for Marie Lies, mother of my long-time friend Leonard Lies, Iguaka Guaribo. Marie passed over into the Spirit Realm at the time that we were celebrating our ceremony on saturday evening. Leonard is a member of this network. He is a film-maker and you will find on his Caribbean Indigenous Network profile a photo of him during the filming of a public service announcement dealing with mental health in which he was given the oportunity to direct the great Native American actor Will Sampson, star of the mental-health-themed movie "One Flew Over The Cookoo's Nest". My deepest sympathy to you and your family, Leonard, at this time of the loss of your beloved mother. I grew to know and love Marie and found her one of the sweetest and most hospitable women I have ever known. I will miss her.

To all the mothers, earthly representatives all of the Divine Mother, a sincere blessing in behalf of the Caney Indigenous Spiritual Circle.
Taino Ti
Miguel

Permalink Reply by maria on May 11, 2009 at 1:43pm
Thank you Miguel for the updates. Please pass on my condolences to Lenny and his family for me.

Permalink Reply by Miguel Sague Jr on May 29, 2009 at 8:28am
Tau My Relatives
As we approach yet another Full Moon Ceremony date I thought it might be of interest to some of you to check out the Sept 5 1985 article in the Pittsburgh newspaper PITTSBURGH POST GAZ... which carried a story of the Caney Circle Full Moon Ceremony as it was being celebrated back then. The Caney Circle is proud of its 27-year-long commitment to maintaining this sacred link between our people and the divine forces of the Universe, and although the online image of the old newspaper is not optimal, it nevertheless bears witness to our early tradition of two decades ago and our long-running devotion to the spirits of our ancestors.
http://news.google.com/newspapers?nid=1129&dat=19850905&id=...
Taino Ti
Miguel

Permalink Reply by Miguel Sague Jr on July 30, 2009 at 9:13am
Takaji My Relatives
We are pleased to announce that the Caney Indigenous Spiritual Circle in Co-operation with the Ohio Representative for the United Confederation of Taino Peoples is sponsoring the September Full Moon Ceremony and Family Day in Youngstown, Ohio on Sept 5th 2009 at 3:00 PM. We invite our Taino brothers and sisters in the Ohio, Pennsylvania and western New York regions to join us in this wonderful celebration of culture and reaffirmation of our ancient ways. Check out our announcement in the "events" section of this network for all the details for this gathering.
Taino Ti
Miguel