This past Saturday night Dec 31 2011, a large number of Pittsburgh residents gathered at the First United Methodist Church in the Shadyside neighborhood of the city to celebrate New Years Eve in an alternate spiritually conscious and Peace-empowering way. The event was conceived by Kevin May of EVOLVER PITTSBURGH, in co-operation with other peace activists of the area.

Kevin organized an activity using a ball of yarn, that created an image of a great web which he called the "PEACEBURGH HAMMOCK" uniting in a network, all the elements of peace-making in the region. This imagery actually reflected the identity of the Maya day-sign for December 31 2011, which in K'iche Maya language is called K'at and represents a net or a heavily laden net sack symbolizing abundance.

It was amazingly synchronistic, since I don't believe Kevin consciously was aware of this connection between his perception of the web and the identity of the Dec 31st Maya Day-sign's association with networks.

Just as synchronistic was the request that we received from Maya-descendant peace-activist Ac Tah of Yucatan who through our local sister Vikki Hanchin, communicated to us here in Peaceburgh the intention of a newly inspired labrynth that he was asking people all over the world to activate at exactly midnight on Dec 31st. It turns out that Ac Tah identified this particular labrynth with the name "PLUMED SERPENT LABRYNTH" and he sent us a number of cloth sheets with the labrynth printed on them so that we could trace it with a stone at the proper moment during the night. The sychronistic element of this is that the Maya day sign for January 1st 2012 is called "Can" in the K'iche Maya language and represents the sacred serpent.

And so at exactly midnight a number of us squatted under a "network" of yarn representing the last day of the year Dec 31  Maya-day "Net", a net that was held up by a large group of peace-lovers and tracing a labrynth with a small stone held in our fingers, a labrynth called "Plumed Serpent" and ringing in the first day of the New Year January 1 2012 whose Maya day-sign is "serpent". 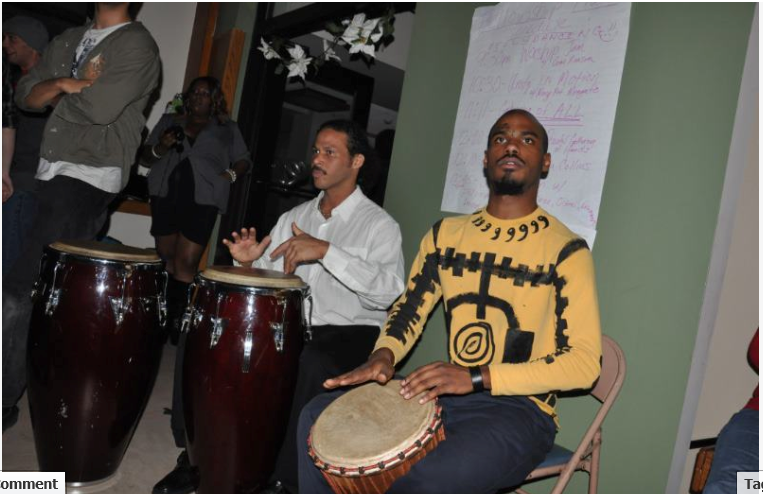 The event was powerful and filled with meaning. In behalf of my son Miguel Sague III (Cha) who played conga drums during the drumming session, my wife Lenia Sague (Leni) who helped me with the interpretation of the Taino Cosmic Mother chant and myself, I want to thank those who conceived this wonderful happening and all of those who contributed to making it such a success.