TAINO AND MAYA ARE REPRESENTED AT G20 SUMMIT DEMONSTRATION IN PITTSBURGH 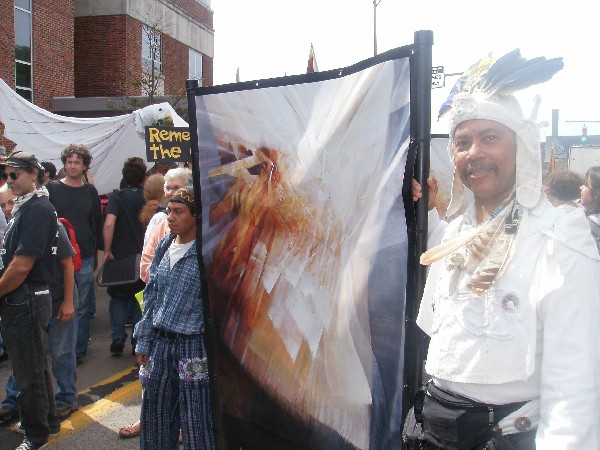 Takaji My Relatives
Presidents, prime ministers and other leaders of the 20 key financial powers of the world were hosted by President Barak Obama at the so-called G20 global economic summit in Pittsburgh, Pennsylvania yesterday Friday September 25th. several sector's of the Pittsburgh community took the opportunity of international media focus to present the positive aspects of this city.

On the other hand many of us realized that this was also a good opportunity to raise important issues to the world that absolutely need to be addressed. Various local and global social/political consciousness organizations and groups who felt the need to present their case before the world community converged on our city and gathered in a massive demonstration organized by Pittsburgh's most venerable Social-Justice group the Thomas Merten Center. The demonstration was dubbed the "PEOPLE'S MARCH". Reaching a participation that I personally estimated at approximately 5,200 marchers, the demonstration filed out of the Oakland neighborhood through the Hill District and into the downtown area at the same time that the world leaders were meeting there at Pittsburgh's Convention Center.

Guatemalan Maya calendar teacher Antonio Aj Ik and I took part in this historic event, participating as part of a contingent of demonstrators made up of local activist artists called "ART FOR PEACESAKE".

Our portion of the march began with a prayer and meditation at the Flagstaff Hill site in Schenley Park, Oakland, where both Antonio and I were given an opportunity to lead a group of marchers in prayers using our own respective Taino and Maya traditions for the sake of Peace, Unity and Reconciliation during the demonstration. 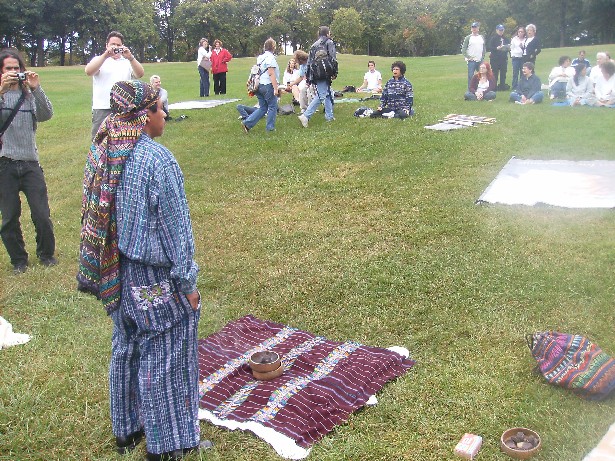 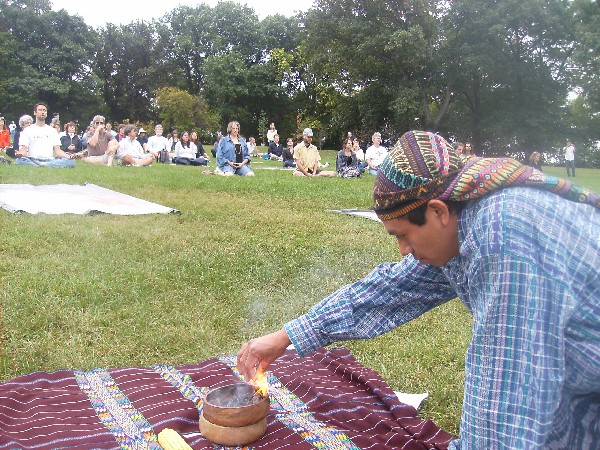 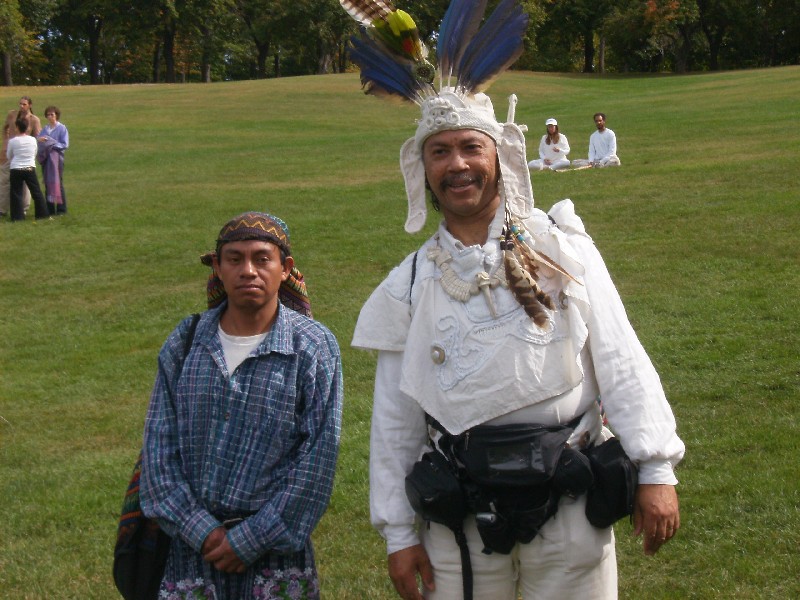 After the meditation our group joined the main contingent of the People's March who had gathered in the Fifth and Craft Street area of Oakland. There was a great deal of tension among the police assigned to patrol our route that afternoon since an unauthorized demonstration organized by the Anarchist group the night before resulted in violence, property damage and many arrests. 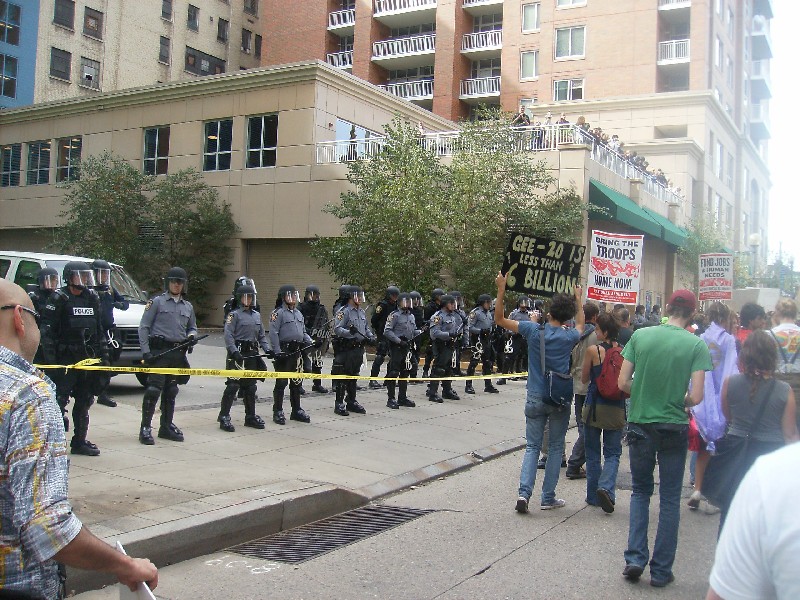 The leaders and organizers of the People's March were determined to keep this particular demonstration totally peaceful in keeping with the tradition of its main sponsor the THOMAS MERTEN CENTER.
Please open these text files containing news reports covering the PEOPLE'S MARCH
KDKA Channel 2 News report Sept 25.doc

The goal of the demonstration leaders was admirably reached. We were able to march peacefully approximately three miles from the Oakland area to Downtown, participated in singing, speeches and other activities in front of City-County building and finally crossed the bridge into the North Side where the demonstration concluded with presentions by a number of people including Cindy Sheehan famous mother of an Iraq War soldier who publicly defied Geroge Bush during his administration on the subject of the Iraq/Afghanistan War. 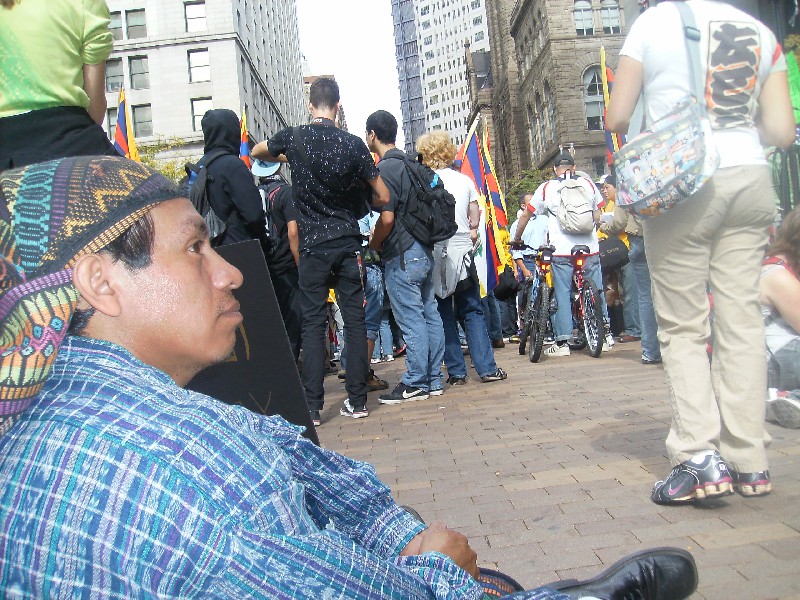 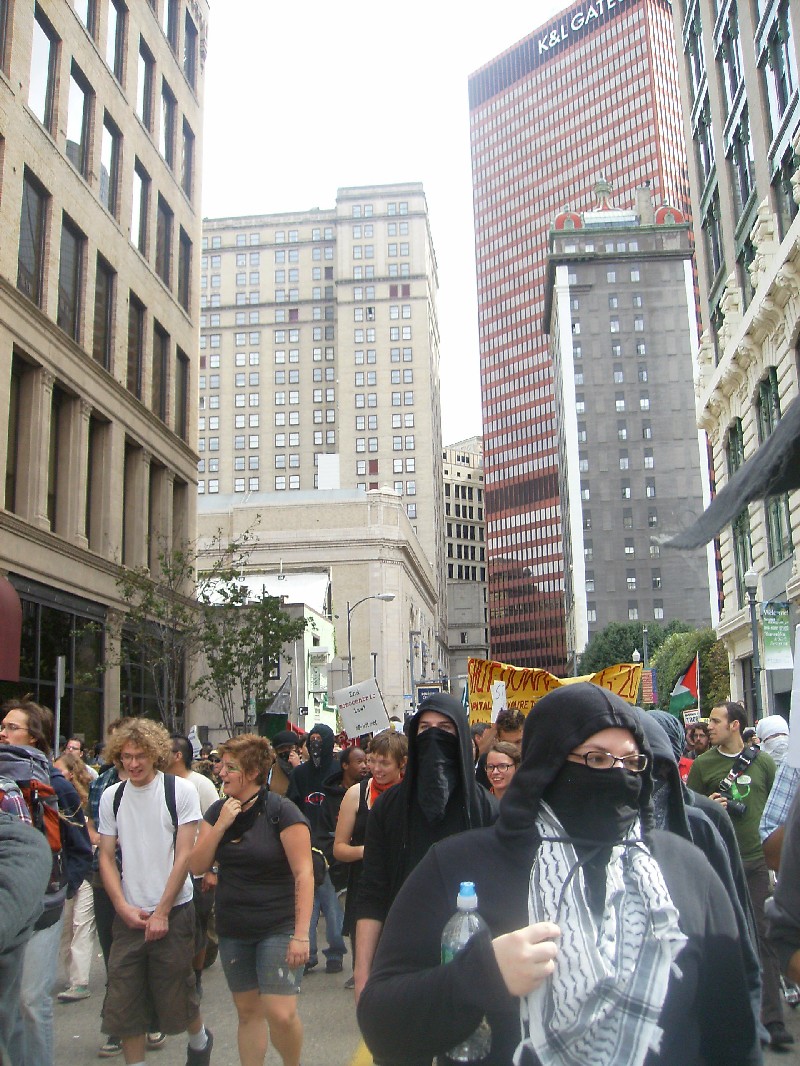 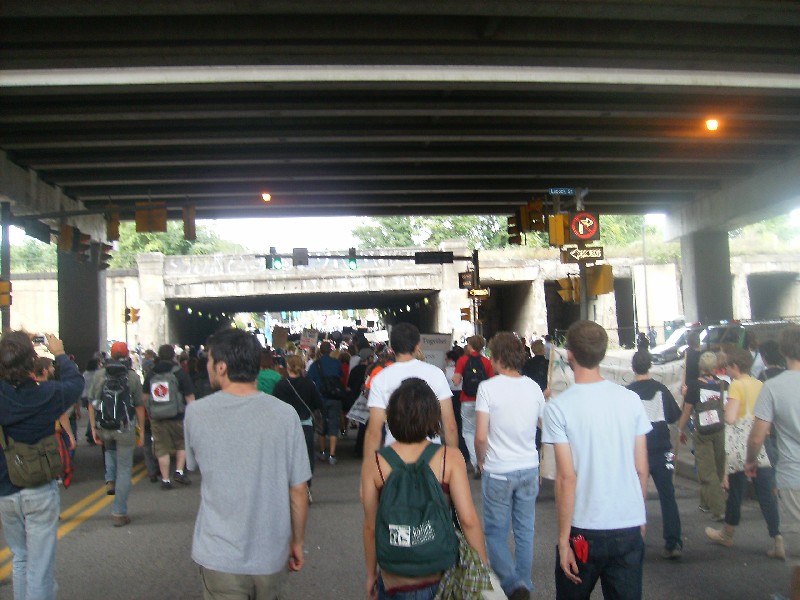 Both Antonio and I are proud to have been part of this the largest political demonstration in the Pittsburgh area since the Viet Nam War.
Taino Ti
Miguel

Thank you for Sharing this! What a Wonderful Thing that you are doing, not only for raising awareness of the struggles of the Taino and Maya People but also calling attention to the turmoil/violence faced by too many today and offering the Healing power of Art as a solution- -- We are now living in Interesting Times, Brother-- we must all Do our part for the benefit of Mother Earth and all who reside with her.

Great report, wonderful photos, so glad that you were there and that you raised these issues in your article here.

Permalink Reply by Miguel Sague Jr on September 26, 2009 at 3:48pm
My Relatives Pricilla and Max
I appreciate your kind words. I have to say that I feel so very fortunate to have had this opportunity, I and the people with whom I collaborated were extremely eager to make the best of it and feel that we did.
Taino Ti
Miguel

Permalink Reply by maria on September 27, 2009 at 12:51am
Taino Ti Miguel: Thank you so much for sharing your part in this. What a great opportunity to speak for all us who push for the power of peace and healing and gives recongnition to the Taino and Maya people exsistance. Please keep up the good work that you do Miguel. I wished I could be there walking this walk with you. But since I can't be there in body, know that I am there in spirit giving full support and prayer for safety, good health, awareness and peace.
Taino Ti'
Maria

Permalink Reply by Dr. Rose M. Xochitl AnaO Quinone on October 8, 2009 at 11:05pm
Tau Beike,
Bo'matum for caring for the children of Atabey. To my Mayan brother, heart felt greetings. May the ancestors and Yucahu continue to shower blessings upon your spirit and heart.
Bo'matum. Rose Ana O Quinones