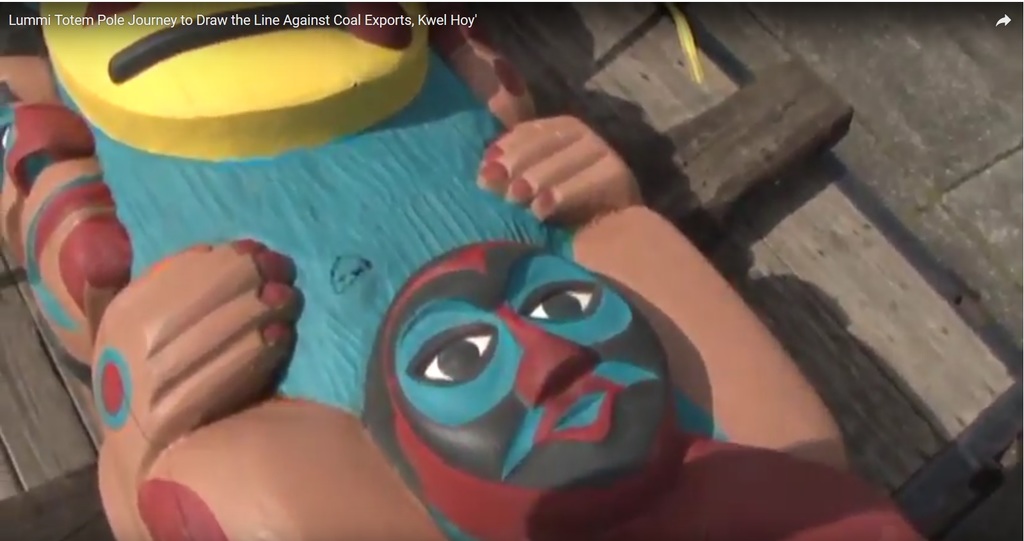 On Monday October 23, 2017 a delegation of members of the Lummi Nation (Coast Salish), arrived in our city of Pittsburgh, Pennsylvania bringing with them the message of victorious struggle against seemingly insurmountable odds. They came bearing a powerful symbol of their ancestral tribal tradition. This object is a wooden totem pole sculpted in the traditional manner by Lummi carver Jewel James. James has been carving poles similar to this one to embody the spirit of various instances of human survival and defiant victory over human-created  challenges since the terrorist attack on New York City, Washington DC and Pennsylvania on Sept 11 2001.

This year Jewel had good reason to create yet another totem pole. This pole represents the incredible victory of his own Lummi people over the efforts of a multi-million dollar project in their tribal lands that would have brought poison, illness and death not only to them but through their territory to other parts of the world.

Here is a Wikipedia article that describes the Lummi struggle:

The Gateway Pacific Terminal is a proposed export terminal at Xwe’chi’eXen (Cherry Point) in Whatcom County, Washington, along the Salish Sea shoreline. "Xwe’chi’eXen (Cherry Point) was an important village site for Lummi ancestors, and is considered culturally and historically significant to the Lummi people."[6] On February 28, 2011, the environmental review process for the Gateway Pacific Terminal commenced when SSA Marine applied for state and federal permits to build the $500 million project. [7] On the federal level, the Army Corps of Engineers is in charge of the environmental review process, and ultimately, the fate of the project.[8] The proposed terminal would primarily export coal, and if constructed would be the largest coal export terminal in North America.[9] The Gateway Pacific Terminal would include a 2,980-foot dock and allow up to 487 ships per year to berth.[10]

The scale of the project resulted in protests by the Lummi Nation and other concerned parties in opposition to the construction of the terminal. The Lummi Nation argues that the construction of the Gateway Pacific Terminal violates their treaty rights under the 1855 Treaty of Point Elliot, which under Article 5 grants signatory nations "The right of taking fish at usual and accustomed grounds and stations is further secured to said Indians in common with all citizens of the Territory."[11] Further, they argue the presence of the terminal could "irrevocably damage religious and sacred sites, such as Cherry Point, if the coal should spill."[12] Previous requests for permits in the area, including for a proposed salmon fishery, have been rejected on similar grounds.[13]

On June 1, 2011, more than 300 persons turned out for a hearing regarding the Gateway Pacific Terminal hosted by Mayor Dan Pike of nearby Bellingham, Washington.[14] Many of the speakers opposed the terminal, citing varied concerns, including "health effects from coal dust and ship and locomotive emissions, climate change from the burning of exported coal in China, and reduced property values from railroad dirt and noise."[14] Supporters of the project also spoke, with primarily members of local labor unions speaking in support because of potential employment opportunities. David Warren, a former president of the Whatcom County Labor Council, stated, "We've lost 3,500 to 4,000 jobs in the last several years in this area ... you can't say you're for jobs if you are against the industries that provide them."[14]

On June 3, 2011 in the aftermath of the June 1 meeting, Mayor Pike announced his opposition to the Gateway Pacific Terminal project, stating "At this point, I don't think this community wants to see any coal, and I'm kind of with them on that," and critiqued the concerns over employment opportunities, stating "We cannot turn our backs on people who are struggling in this community, but that doesn't mean we take jobs at any cost."[15]

In May, 2012, the Seattle City Council unanimously passed a resolution in opposition to the development of coal export ports in the region.[8] This followed the passage of resolutions in opposition by smaller municipalities regionally, including Hood River, Oregon, and Camas, Washougal, and Marysville, in Washington.[8]

In October 2012, a group of Native and non-Native fishermen gathered a fleet of boats in the waters around Xwe’chi’eXen to stand with the Lummi Nation in opposition.[16] This action was supported by the leadership of the Lummi Nation, with Lummi Nation Chairman Cliff Cultee stating "We have to say ‘no’ to the coal terminal project ... it is our Xw’ xalh Xechnging (sacred duty) to preserve and protect all of Xwe’chi’eXen."[16] Again, in October 2012, tribal leaders burned a mock million dollar to signify that they could not be bought out.[17] 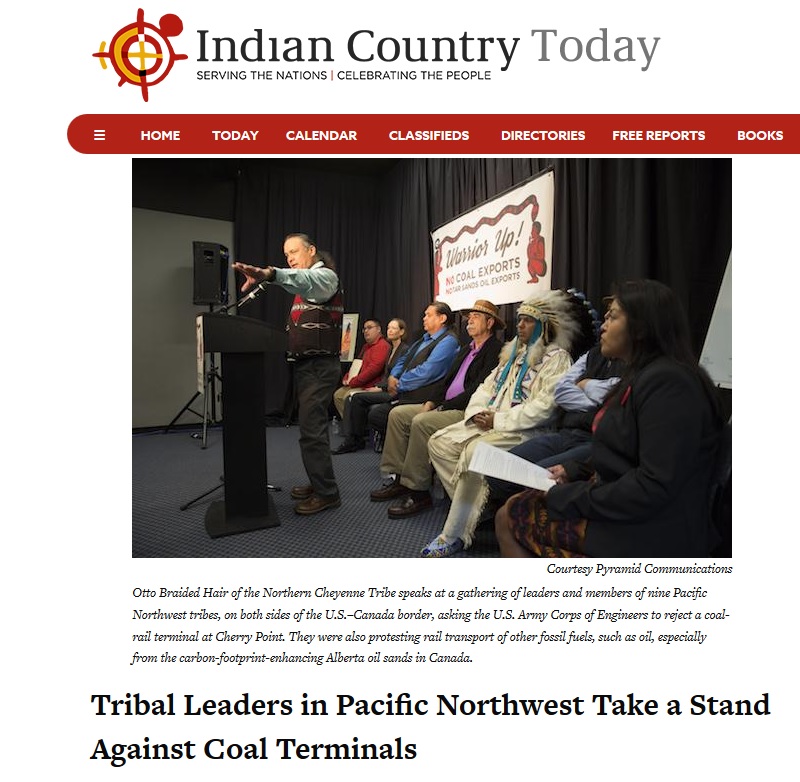 This struggled continued right up to last year when finally on May 10 2016 the Army Corps of Engineers issued a decision denying the permit to the company SSA Marine that would have allowed them to complete their projected coal terminal at Cherry Point.

The members of the Lummi tribe were understandably celebratory before this momentous victory as were their impressed non-Native allies and environmental activist who had for years carried on a futile struggle against the same company.

The Lummi people are one of several Indigenous nations living along the Pacific North West coast of North America. The territories of these tribes stretch from Northern California to southern Alaska along the whole west coast of United States and Canada. They are known for their dramatically beautiful wooden sculptures and especially their totem poles. Now the Lummi woodcarver Jewel created his own new version of a traditional totem pole to celebrate this historic victory and helped organize a cross-country journey of that totem pole from his home in Washington State all the way east to our own city of Pittsburgh, Pennsylvania where he presented it to supporters and Indigenous people of our area at the Carnegie Museum of Natural History in the Oakland neighborhood. They stopped and made presentations at Indigenous communities and cities all along the route.

I was honored to be present in representation of the local COUNCIL OF THREE RIVERS AMERICAN INDIAN CENTER at the first of a series of events scheduled to take place in Pittsburgh. I also was proud to represent my own tribal organization the UNITED CONFEDERATION OF TAINO PEOPLE and our Taino spiritual community the CANEY INDIGENOUS SPIRITUAL CIRCLE.

At this event on October 23 Jewel James as well as several other people intimately involved in this project made a impassioned presentation in the theater hall of the Carnegie Museum here. The presentation explained the multi-year struggle against the coal terminal and the totem-pole journey. At the end of the event a prayer session took place outside next to the totem-pole in which all of those who attended were invited to participate by physically placing their hands on the carving. Our own Indigenous leader Johnny Creed Coe representing the Dakota Nation was given the honor of saying a prayer and singing a sacred song before the wooden object as people stood silently all around it. 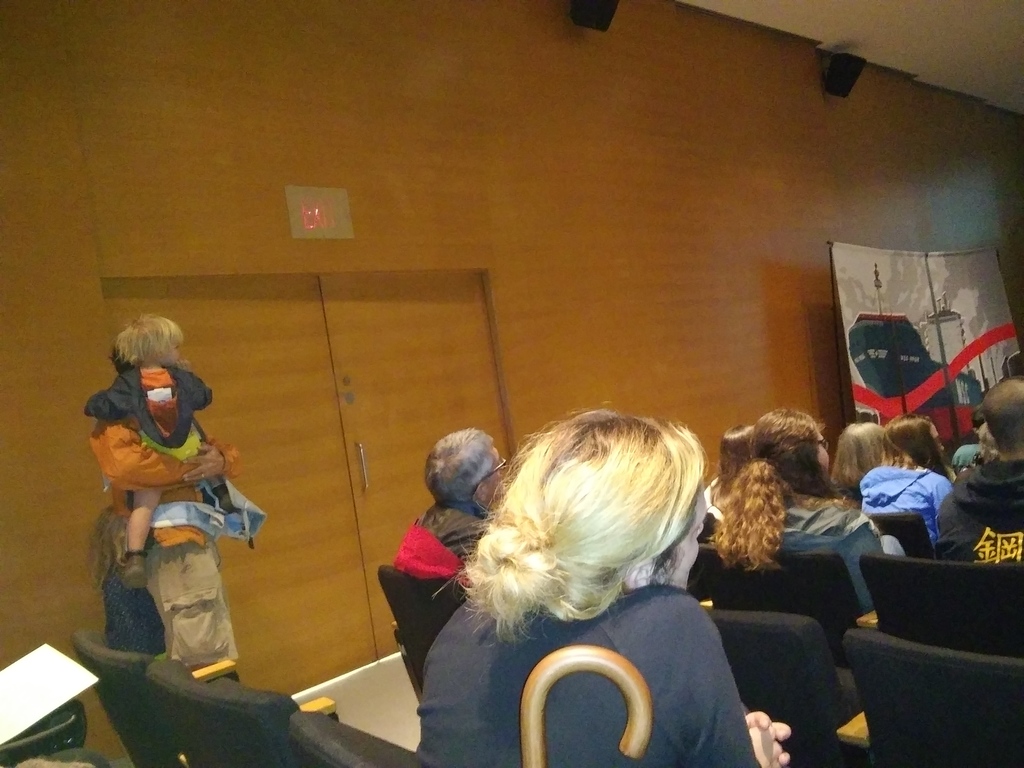 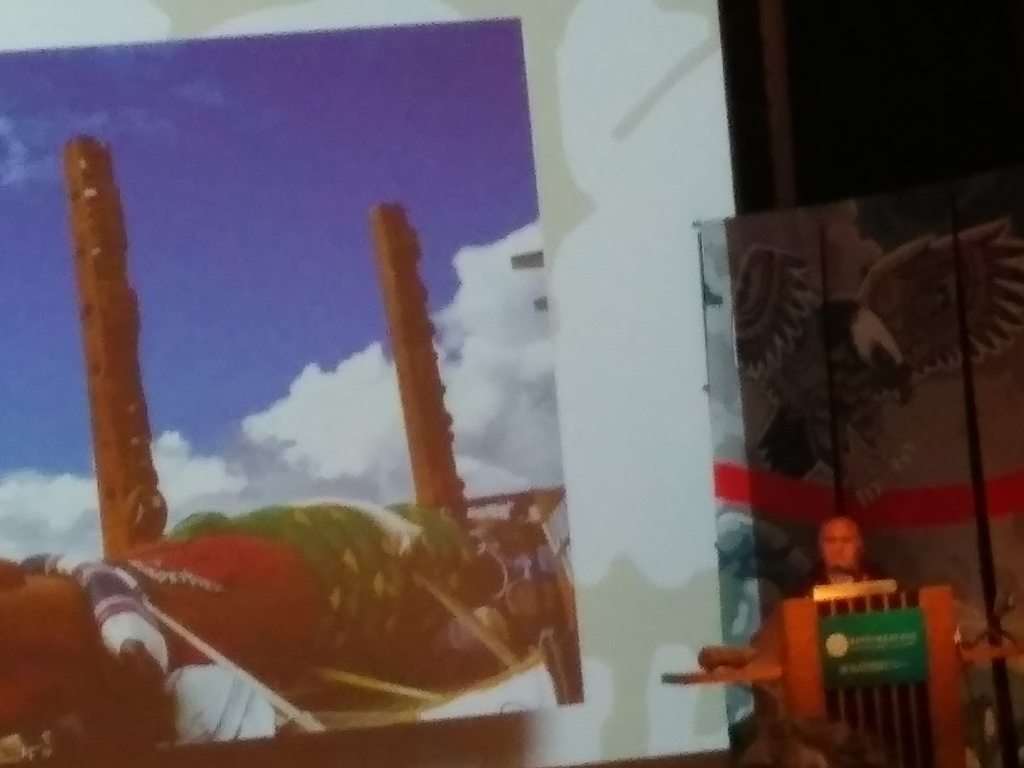 My wife Leni Sague and I attended the presentation in the museum theater. Later, outside we joined the others at the ceremony by the totem-pole. 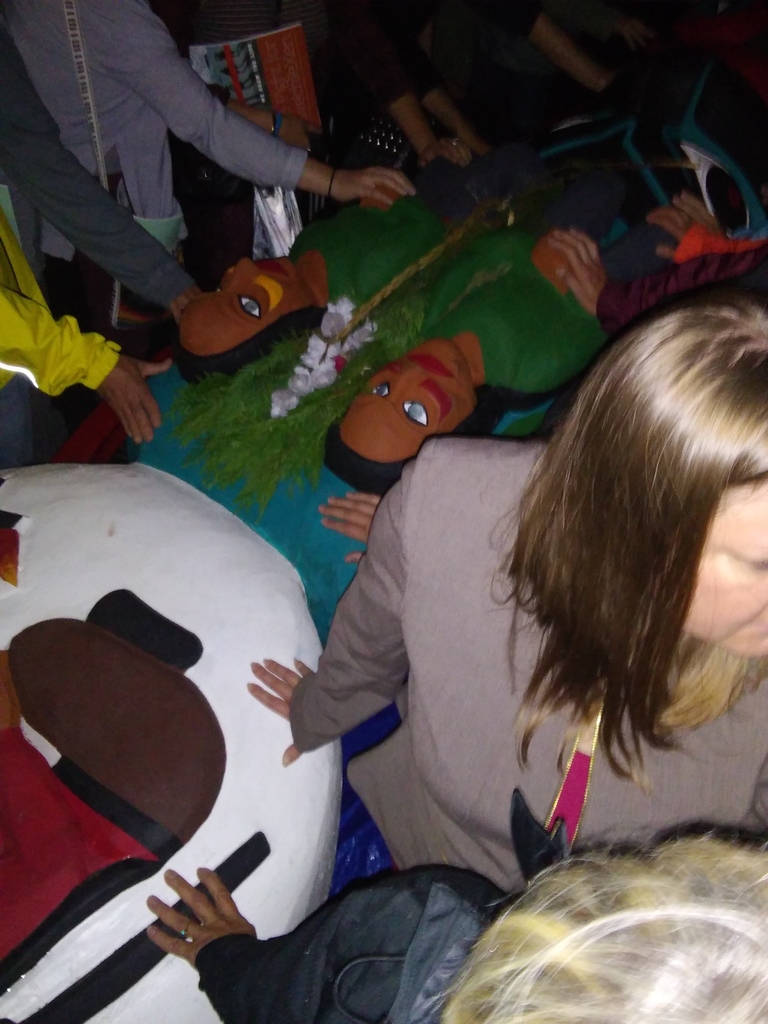 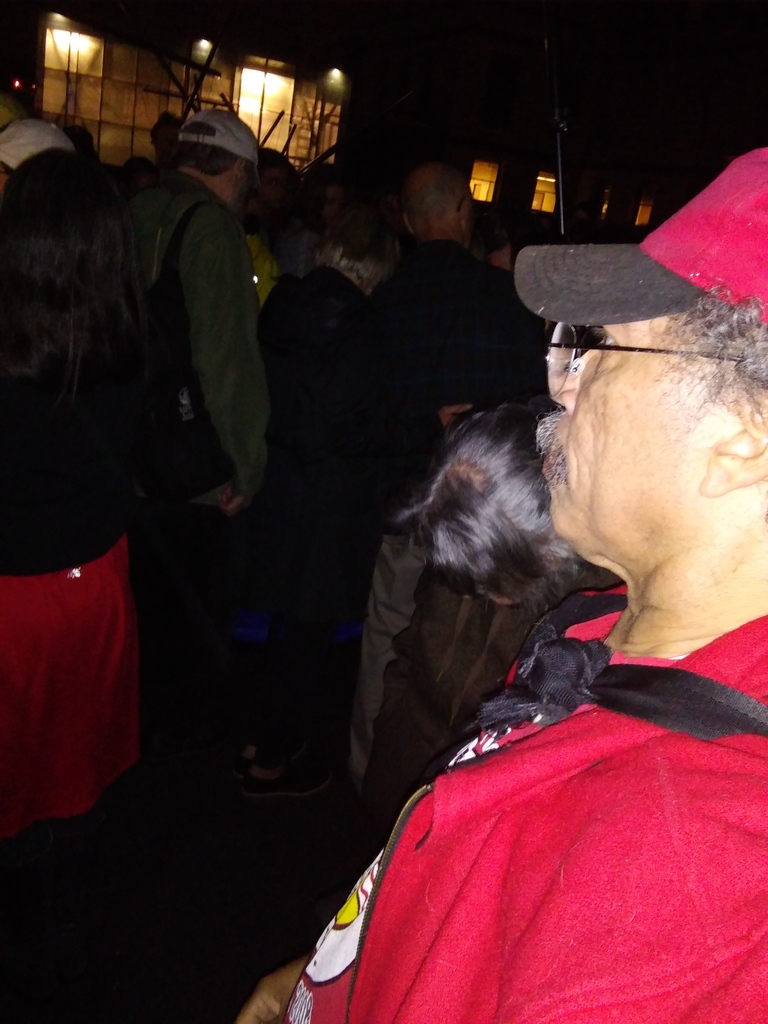 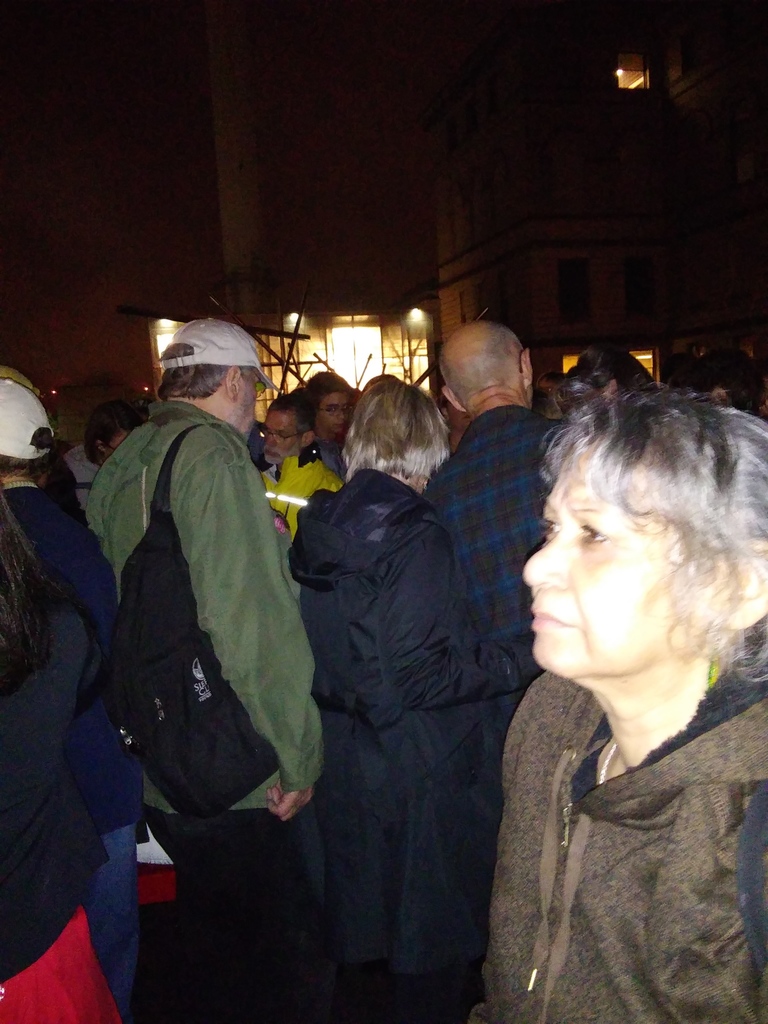 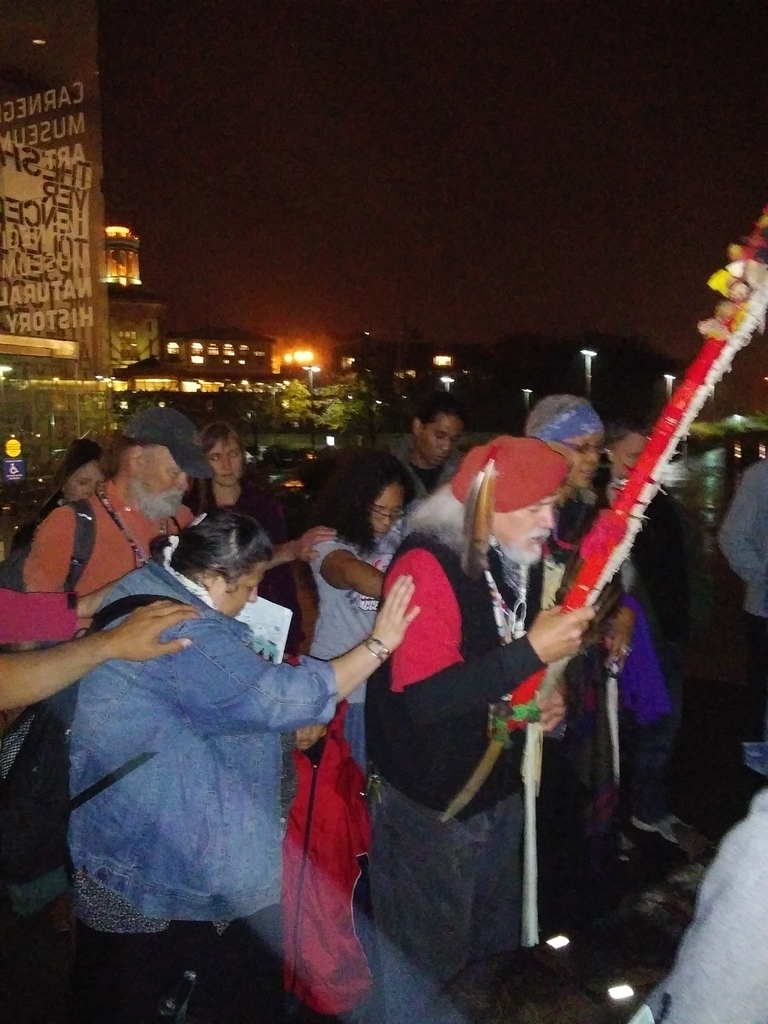 I plan to represent my organizations at the subsequent pole-raising ceremony this coming Wednesday.