WE CELEBRATED CANEY SUMMER SOLSTICE IN YOUNGSTOWN OHIO WITH UCTP 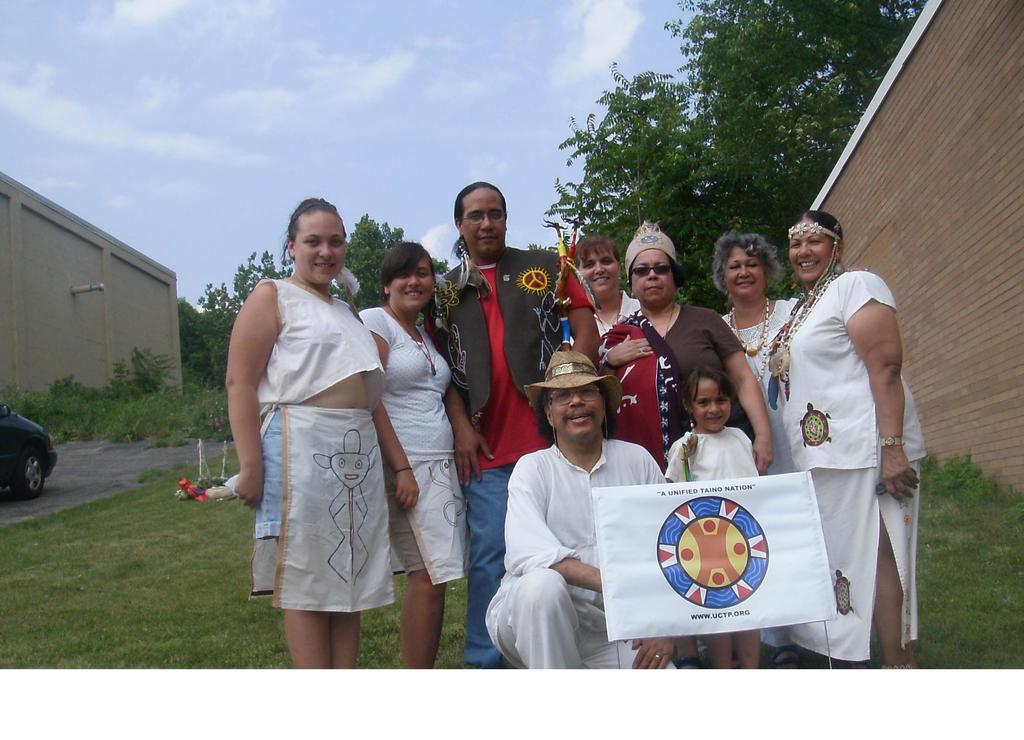 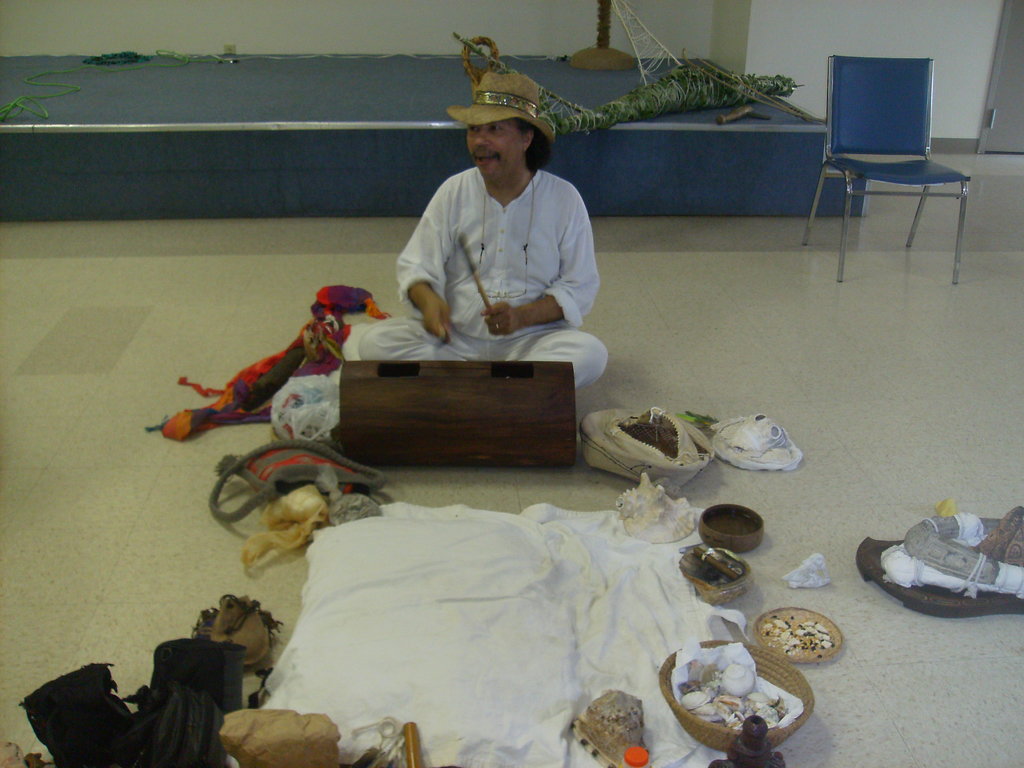 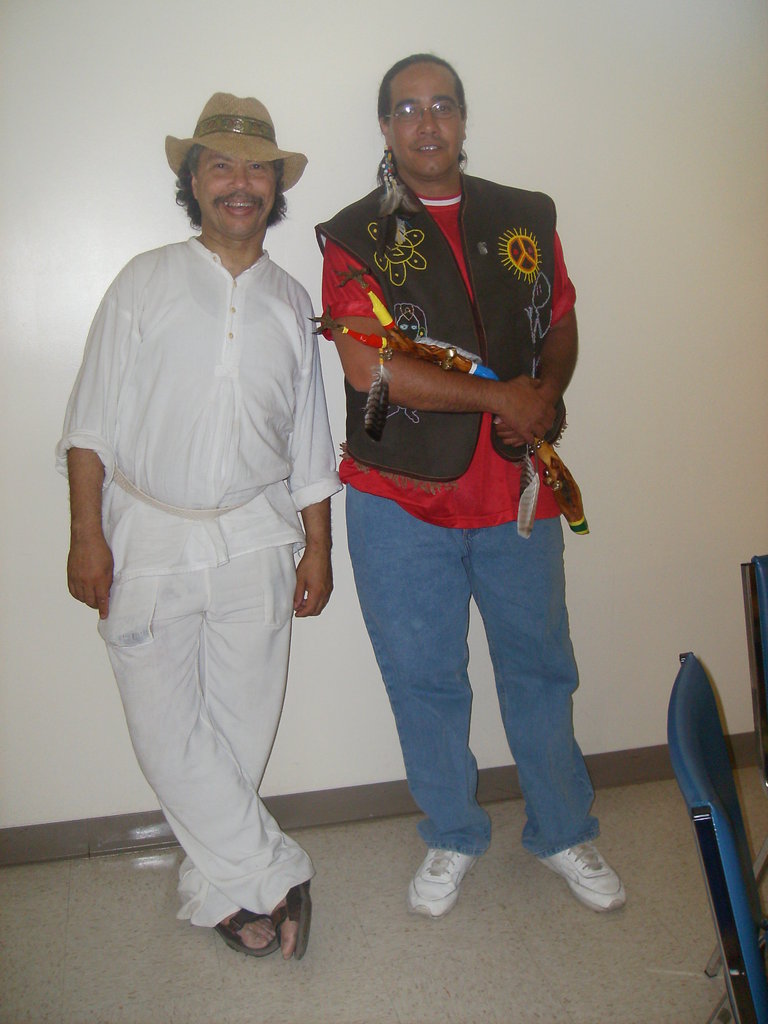 This past Saturday I traveled to Youngstown Ohio with my wife Leni and our New York sister Vanessa Inaru of the NY UCTP and the Bohio AtaBei to celebrate this year's Summer
Solstice Ceremony with the Tainos of eastern Ohio. In Youngstown we
were hosted by the Ohio United Confederation of Taino People
representative and beike in training of the Caney Spiritual Circle Rose
Xochitl Quinones who was present with several members of her extended
family.

For me it was a wonderful satisfaction to again share ceremonial space with our Ohio brothers and sisters who welcomed us with great hospitality and kindness. The event took place
on the grounds of Youngstown's

That organization happened to be celebrating the grand opening of a new high tech wing on the same day as our ritual so, before our proceedings began there was a ribbon cutting ceremony and there was a local legislator in attendance. After that, we were given an
opportunity to address those in attendance, a crowd that included
several hundred local Hispanics among whom were many Tainos mostly from
Boriken.

We began our ceremony outside, next to the main agency building with a circle dance that included many participants of the earlier OCCHA grand opening event. The participants filed out of the building into a small grassy area where we had set up our ceremonial items. The local
media covered the proceedings as we formed a circle. Our New York
sister Inaru led the group in a circle dance explaining the meaning of
the activity. I played the mayohuakan as Inaru led the group in the
dance. Eventually she headed into the building and we all paraded into
the main meeting hall.

In the meeting hall Inaru addressed the assembled crowd and introduced the PEACE AND DIGNITY JOURNEYS. which is the reason why she had traveled from New York. 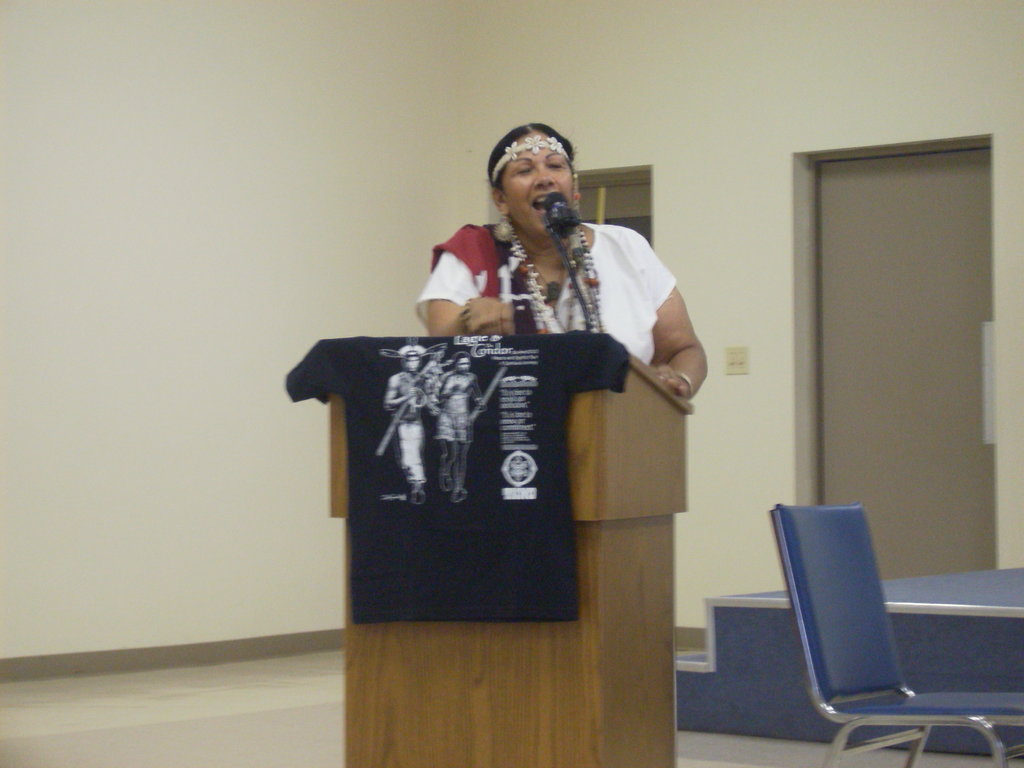 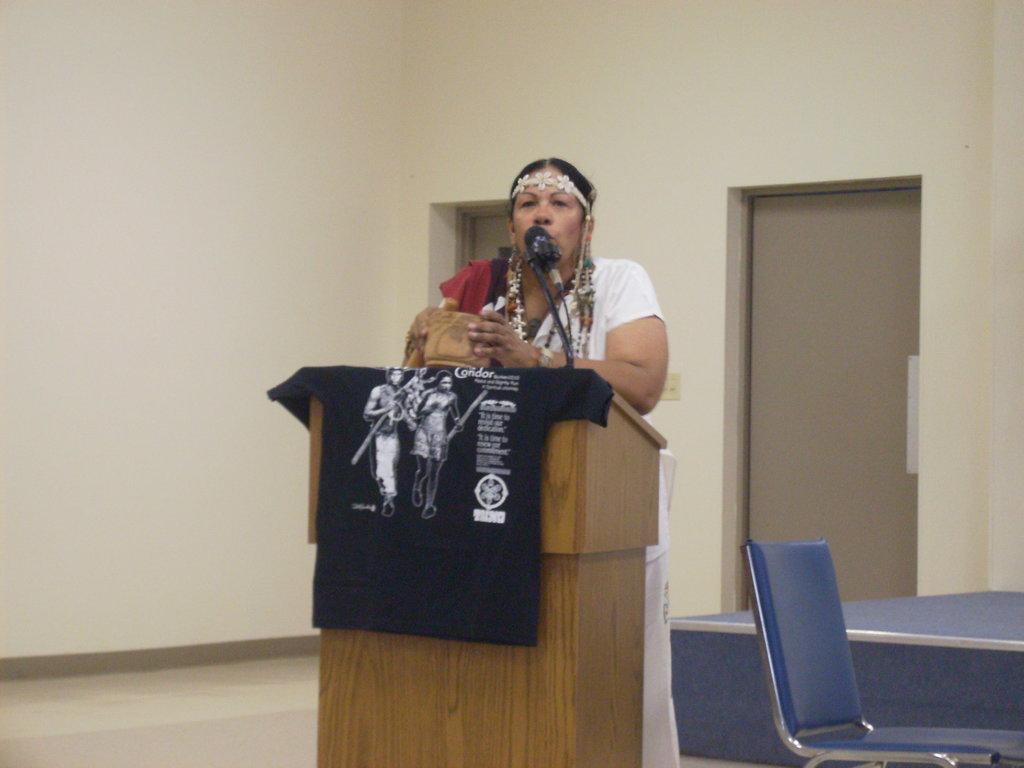 She informed the crowd on the details of this year's inclusion of the island of Boriken in the Peace and Dignity Journeys process.

After her speech on the Peace and Dignity Journeys Inaru introduced the Youngstown Tainos to the organization that she heads the BOHIO ATABEI . This organization is dedicated to the tradition of respect and honor
of Taino women.. Inaru brought a special ceremonial mortar and pestle
which are the main ritual objects of the Bohio Atabei. These ceremonial
objects were blessed by contact with every woman present at the event
and then handed over to our Youngstown Taino sister Rosa Xochitl
Quinones who will now be the official leader of the BOHIO ATABEI in
Youngstown. 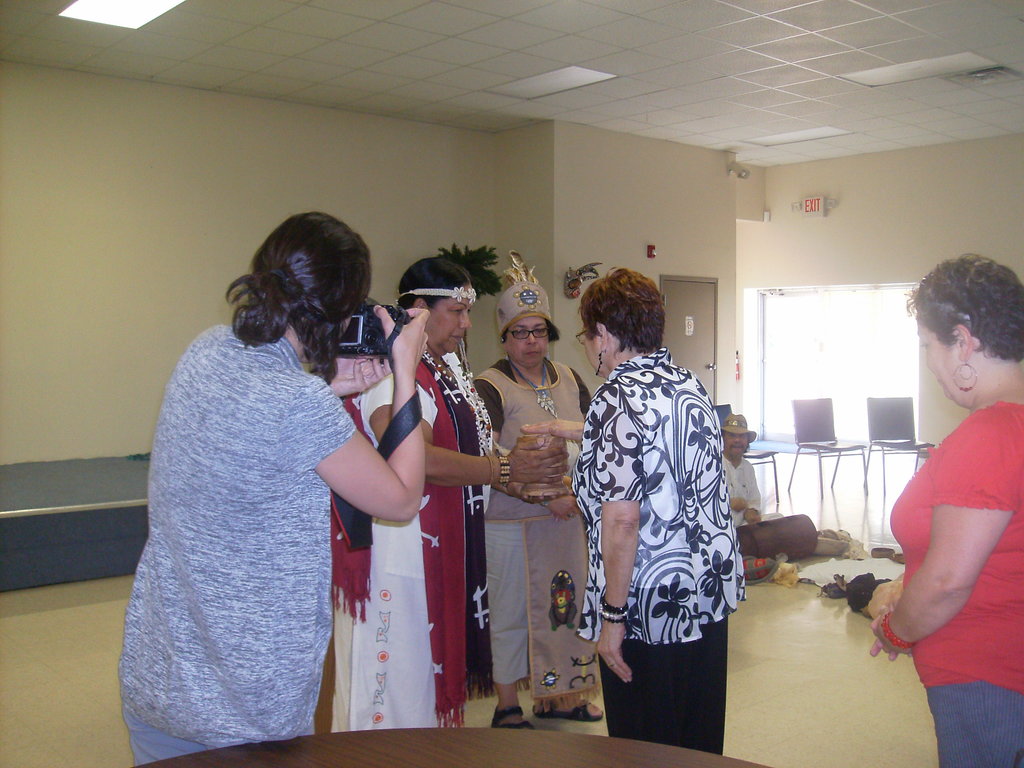 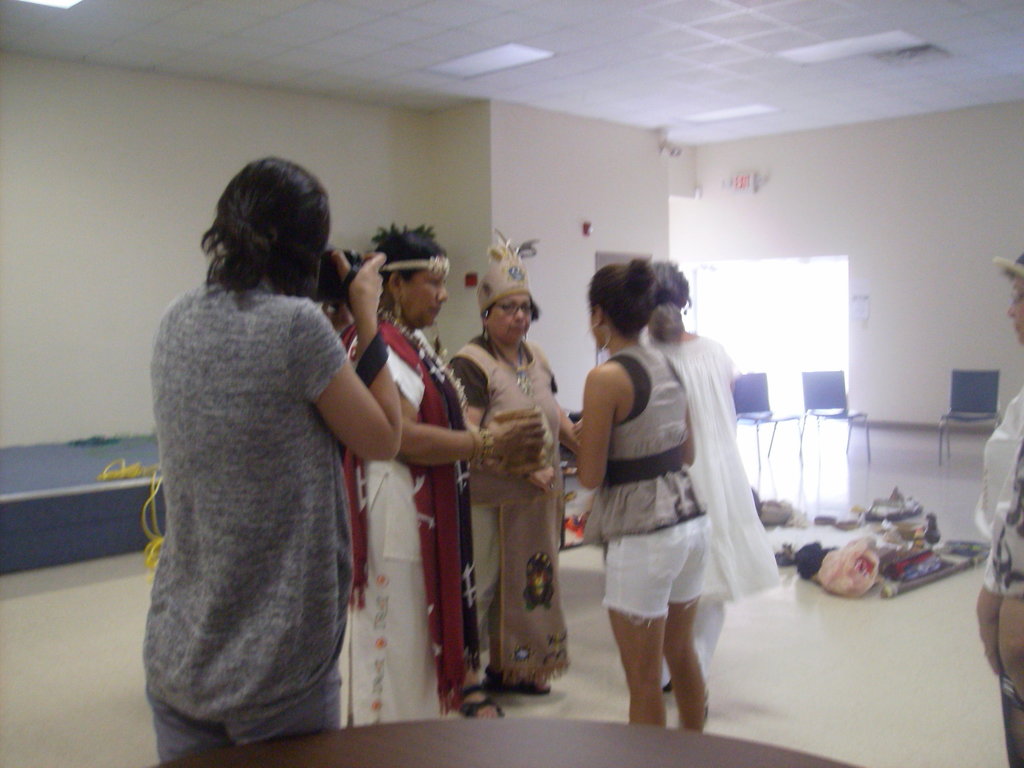 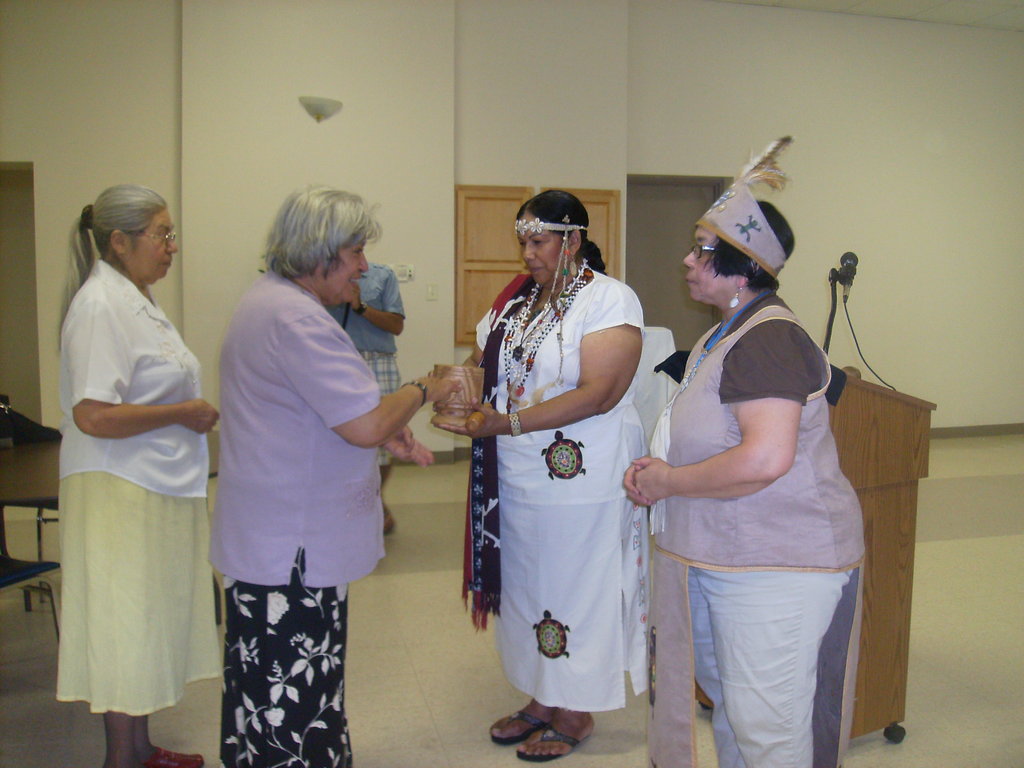 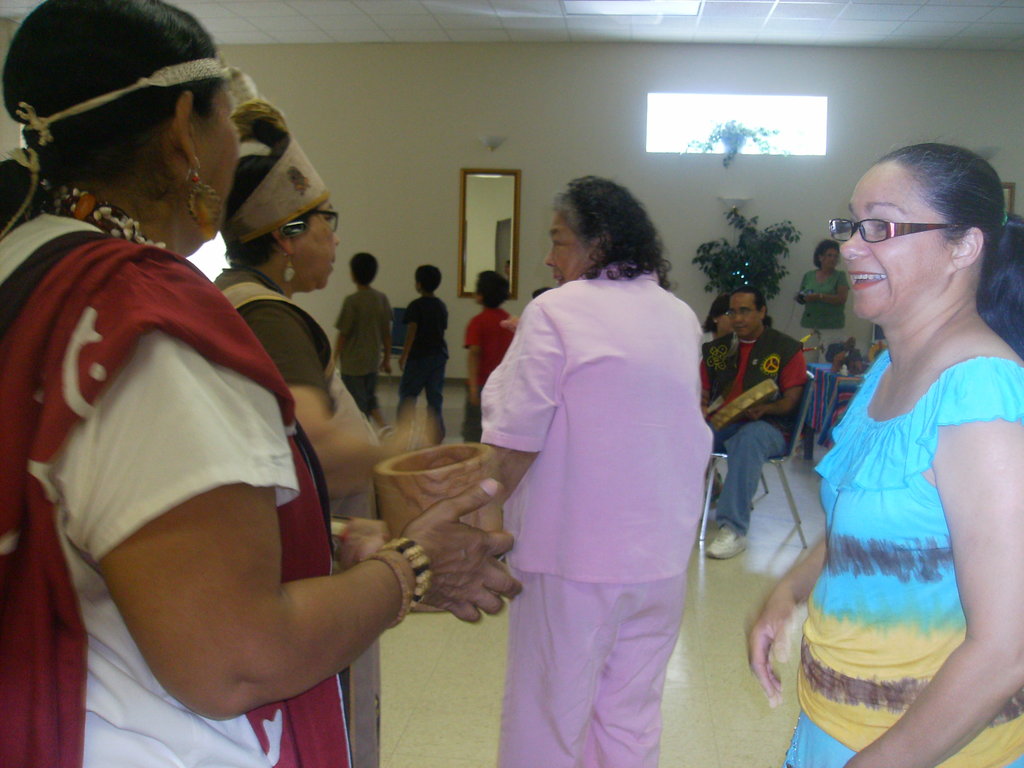 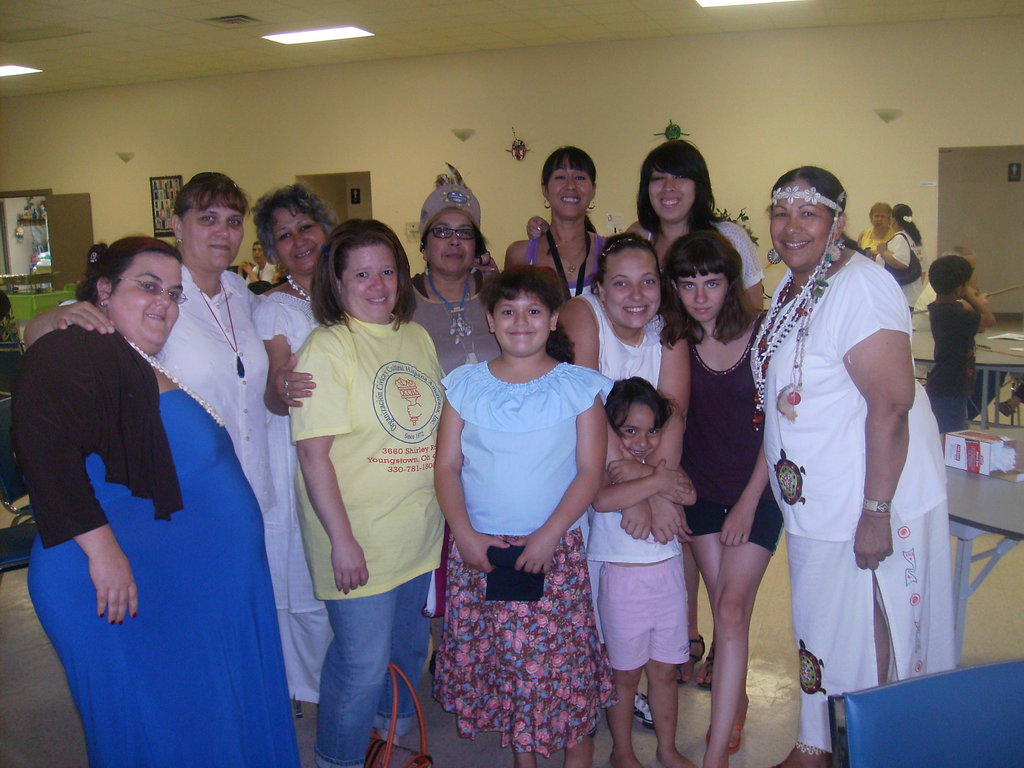 After Inaru's presentation we performed the sacred Summer Solstice ritual of the Shark Dance in which three very young local Taino boys assumed the role of our male Life Spirit Yoka Hu. The Shark Dance was, as usual, a marvelous confirmation of our ability as human beings, children of our Earth
Mother Ata Bey, to face and overcome the challenges of life that the
Taino spirit of Experience, the tough tacher GUAKAR tends to place in our path to teach us to be strong.

In keeping with our Caney Circle tradition I wore the mask of the cemi and armed myself with Guakar's manaya hatchet. In my left hand I wielded the effigy of Guakar's totem
creature, the fierce KAHAYA shark made from twigs and leaves. I allowed
each one of the three boys to take a turn playing the role of Yoka Hu,
armed with his bow and arrow. Each interpretation of the dance
concluded with the boy winning the battle against Guakar;s challenge by
piercing the shark with an arrow. 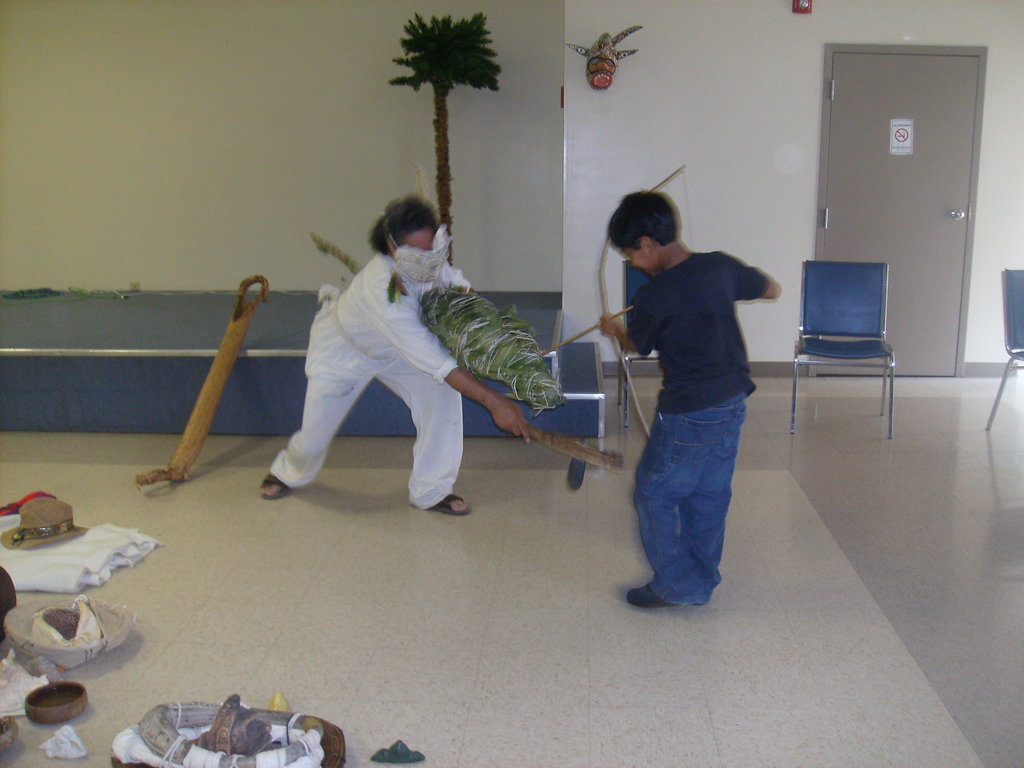 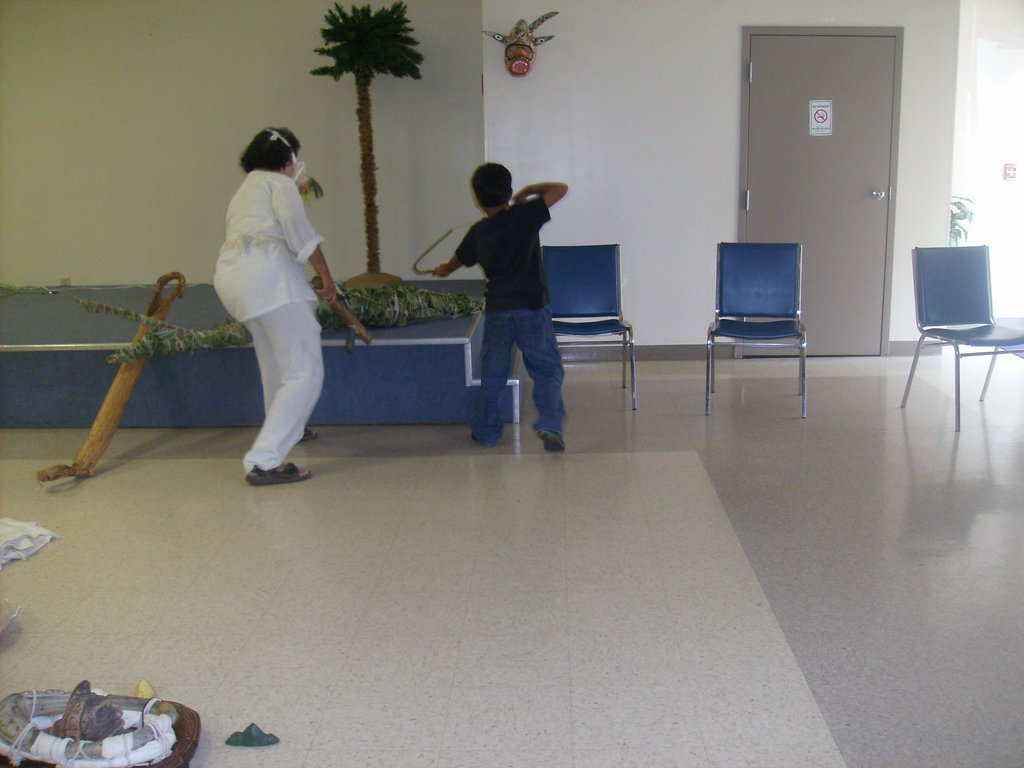 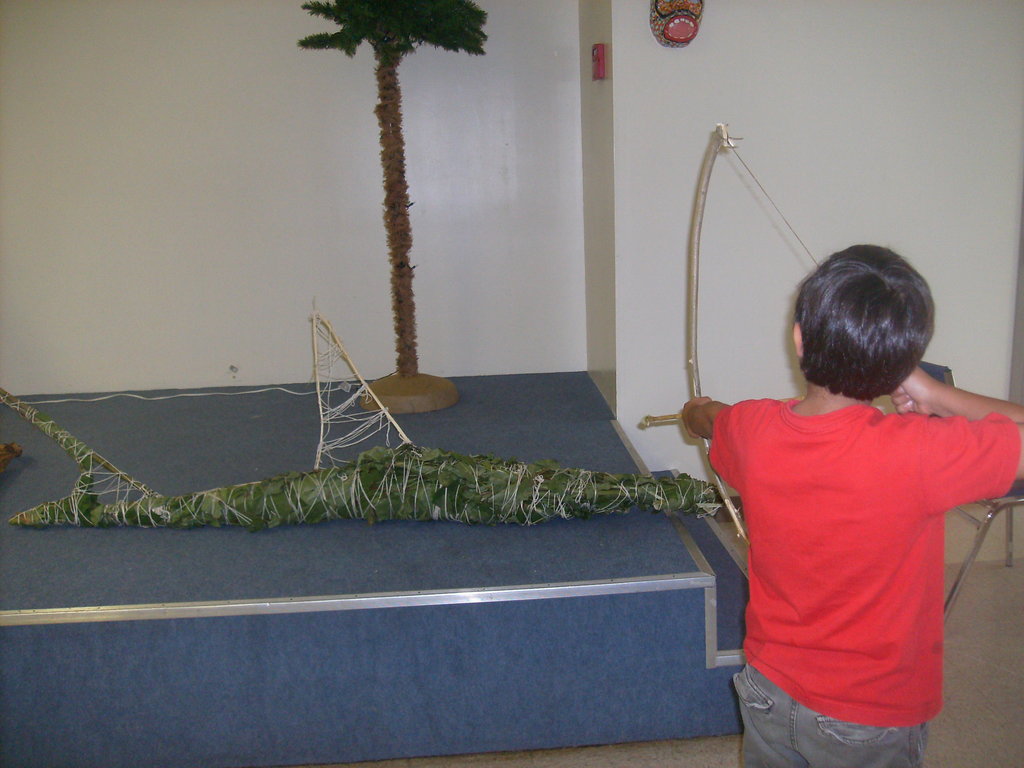 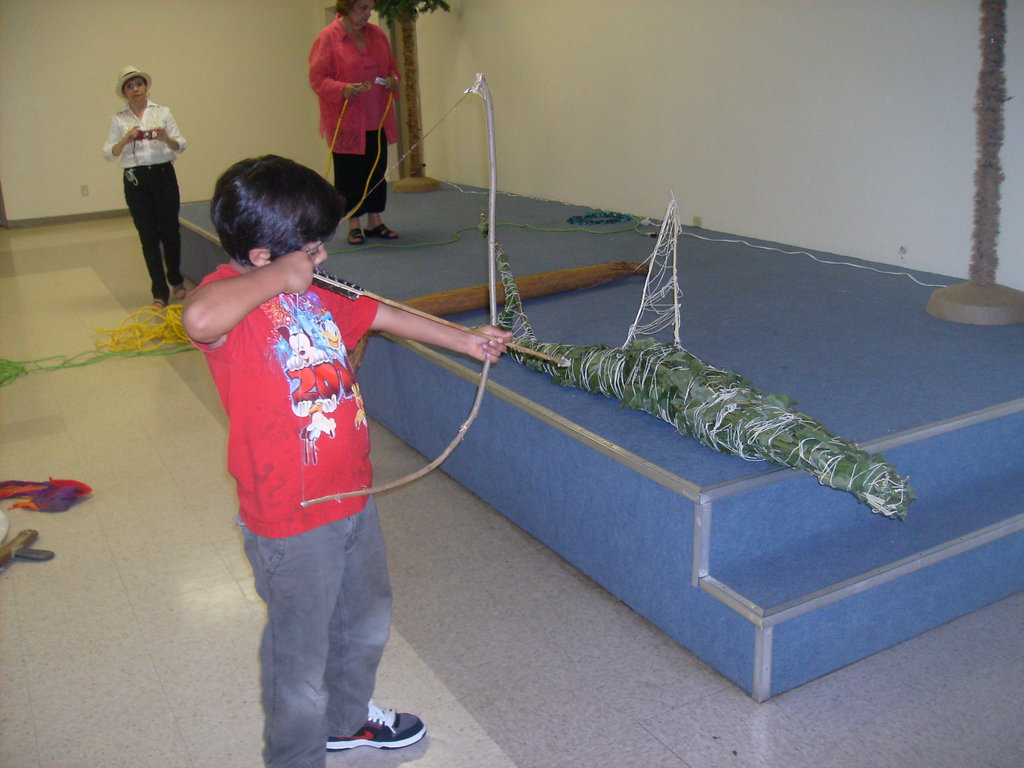 Our Taino tradition was again manifested and confirmed and a whole new community of Tainos were exposed to the ancient rituals. We in the Caney Indigenous Spiritual Circle are
committed to awakening more and more of our Taino brothers and sisters
to this tradition and th culture so that the spiritual ways of our
ancestors may again provide to contemporary Tainos a path that they can
follow into our future.

Permalink Reply by Miguel Sague Jr on June 21, 2010 at 12:19pm
The YOUNGSTOWN VINDICATOR is only one of several local media outlets in this eastern Ohio community that covered our Saturday event. Please read a quote from their piece published on the following Sunday.

By jeanne starmack
starmack@vindy.comThis e-mail address is being protected from spam bots, you need JavaScript enabled to view it

To the untrained eye, a Puerto Rican pastelillo looks like a close relative of the Mexican chimichanga, but make no mistake — Mexican and Puerto Rican food are not the same.

Nancy Crespo knows. Half Puerto Rican and half Mexican, the Columbus woman gets to have it all — though she confesses liking Puerto Rican food best for its authenticity.

“When you get food from people like this,” she added.

Around Crespo and her family, including her parents, Tony and Maria Crespo of Youngstown, people at the Taino Summer Solstice and Puerto Rican Food Fest munched on arroz con gandules, or red rice with pigeon peas, arroz blanco y habichuelas, or white rice and beans, and pernil, or pork.

The event, at the OCCHA Hall on Shirley Road on Saturday, was paired with the Hispanic social-service agency’s celebration of a new wing on the building. The wing, which used to be an old warehouse, was remodeled with $142,500 that U.S. Rep Tim Ryan of Niles, D-17th, helped secure. It will be a senior and youth center, with 65 children starting a summer program there Monday, said Mary Isa Garayua, OCCHA’s executive director.

It’s all about education, said Ryan, who attended the ribbon-cutting.

“That’s what this room is all about,” he said.

Garayua said the room will be used for after-school tutoring, as well as the summer program, and also for senior citizens’ meetings.

People who attended the celebration were educated, too, about a part of their heritage — the Taino Indians.

They are indigenous to the Carribean, and it’s estimated that half of the Hispanic community in the Youngstown area are Taino, said David Jorge of Austintown. Jorge, a member of the United Confederation of Taino People, participated in a Taino ceremony to honor the summer solstice, led by Miguel Sague of Pittsburgh.

“We want to raise awareness that this is their indigenous soul,” said Sague, who is a Beike, or medicine man, affiliated with the Cane Indigenous Spiritual Circle.

Also participating in the ceremony was Inarunika Pastrana of New York, N.Y., who is the head of a women’s group, Bohio Atabei.

“The first people Christopher Columbus met were our people, because he landed in the Caribbean,” said Sague.

The ceremony included a dance that began outside and continued inside when it began to rain, with Pastrana leading the way.

“Every time you touch the earth, you are giving Mother Earth love,” she told the circle of dancers as they stomped their feet to the beat of Jorge’s drum.

Pastrana also established a chapter of her women’s group at the celebration.