Was the Arima Mission an “Indian Mission”? For what purposes, and in whose interests, was the Arima Mission established? How many Indigenous people lived in the Arima Mission, and in Trinidad as a whole? Who counted them? How were they counted, and why? Why did Arima come to be seen as a centre of Indigenous culture in Trinidad? Exactly how did the Amerindians “vanish” from the Mission? What “secrets” are revealed by the Baptismal Registers about the nature and impact of the Christian “civilizing mission”?
When under Spanish colonial rule the authorities approved the Catholic Church’s plans for building mission towns in Trinidad, it was as part of dual commercial and counterinsurgency strategy. Mission towns were established in the early to mid-1700s, in an effort to “pacify” the Amerindian population, and to incorporate Amerindians into profitable, market-oriented activities. Missions were multi-pronged: they combined religious, political, economic, and military objectives. While cocoa production increased under the direction of missionaries, and would eventually become a lucrative commodity destined for export, the missions had limited or mixed results on the other fronts. The missions were subject to attacks from Amerindians outside of the missions, and were subject to internal resistance, outright rebellions, and flight of the Indigenous population.
Myths
Among the many things that we learned from studying the primary sources and the baptismal records of the Arima Mission are that certain myths (working fictions) have been in operation and, like all good myths, they are contradicted by documentary evidence. The primary myths include the following:
Let's start by looking at myth #3, one of the most popular, influential, and enduring because it has been institutionalized.
Extinction via Miscegenation
Extinction via miscegenation was the dominant and thus standard mode of rhetorically displacing Arima’s Amerindians (see Forte, 2013). This idea, that Amerindians became “extinct” by virtue of forming unions with members of other racial/ethnic groups, amounted to the most common and thus most taken for granted “explanation” that was widely reproduced in the literature on Trinidad in the 19th and even the 20th centuries. Writers of local histories, memoirs, and travel books reflected what was ultimately state policy: the Mission was only for those persons who were “pure” Indians. Any mixed offspring would lose the right (and the obligation) to reside in the Mission. This policy was succinctly explained by the corregidor of the Mission, Martin Sorzano, in testimony before the Burnley Commission on July 16, 1841. In response to the commissioner’s question, “To what, then, do you ascribe the gradual and rapid diminution in their number?” Sorzano replied:

“Chiefly to the gradual mixture of the races. As pure Indians they were compelled to remain at the mission, and conform to the regulations; but the children born of Spanish and Creole fathers could not be so classed, and would not submit to the restraint of remaining there”. (Burnley, 1842, p. 109)

As a fundamentally racial narrative, the idea of extinction via miscegenation found favour with colonial élites who has busied themselves with formulating and then disseminating—even legislating—the racial ordering of the working class in Trinidad, especially as material questions of rights to property and free labour were determined by such an ordering. Governor Woodford instructed Captain William Wright, on the latter taking charge of the Mission, to do as follows with the Indian residents: “You will then proceed to make a return of them by families, shewing their lineage or descent as well as their trades, and if intermixed with other than Indian blood” (quoted in Fraser, 1971[1896], p. 104). Dating from the earliest years of British colonization in Trinidad, an English writer described Mission Indians in one of the earliest recorded instances of the racial extinctionist theme:

“Some of the Peons are Indians of South America,—others are the mongrel offspring of the white Spaniard and Indian, the Indian and Negro, or the progeny of any of them, united in such varieties of shade, as almost to have effaced the traits of the aboriginees [sic]. But there are many of the true Indians to be seen, at the different Indian villages, or missions”. (Letter to the Duke of Portland, 1807, p. 60)

One of the first and most prominent local history volumes was that authored by E.L. Joseph in 1838, which is a valuable source of insights into élite thinking of the time, and a source of tremendous misinformation as well. In one notable passage on this topic of race and indigenous identity, Joseph wrote the following:

“This indolent harmless race is here fast merging on extinction – from no fault of the local government, nor from any disease: the births amongst the Indian women exceed the deaths in the usual ratio; the fact is, that the Indian men, since they are obliged to live in society, choose mates of other races, and the women do the same (Mr. Coleridge was misinformed when he stated that the Indians will not intermarry with other races), hence out of every seven children born of an Indian mother during the last 30 years, there are scarcely two of pure blood, as I have been informed; this will of course decrease their population; for those of the mixed race, whether they be Samboes (between Negroes and Indians), or Mustees (between Europeans and Indians), or the countless castes that the admixture between the African, European, and Indian tribes produce, they are not the real aboriginal race, and leave the inactive community of Indians as soon as they reach the age of discretion”. (1970[1838], pp. 102–103)

As if to concretely prove Joseph’s adherence to plainly racial paradigms, he cited in one passage the argument that the Amerindian cranium “is uniformly superior to the cranium of a negro, whose powers of mind are as much inferior to those of the Indian, as those of the latter to the powers of the European” (1970[1838], p. 121).
Extinction via miscegenation as a narrative was as enduring as it was influential. The “approximate extinction” of the Amerindians, through the process of inter-marriage, was a concept used by De Verteuil (1858, p. 172). One travel writer asserted, presumably on the basis of what he was told by his hosts, that by 1797, “probably many of them [Indians] had been absorbed by intermarriage with the invaders. At present, there is hardly an Indian of certainly pure blood in the island, and that only in the northern mountains” (Kingsley, 1877, p. 74). Several decades after Joseph, Fr. Cothonay wrote, “The inhabitants of this earthly paradise are not in effect Indians….they are descendants of the Spaniards, more or less mixed with the Indians [Amerindians] and the blacks” (1893, pp. 241–242).
However, much is missed if we take sources at face value. On the one hand we are told that the Arima Mission was something of an exclusive racial zone designed to preserve Indian purity: thus Harricharan (1983, p. 22) asserts that priests “prohibited ‘mission’ Indians from contact with ‘bush’ Indians, Negro slaves, mestizos or other Spaniards and kept them confined to the missions”; Noel argued that one of the successes of the Capuchins “seems to have been the partial preservation of the Indigenous race as agricultural workers under the external guise of living a Catholic life” (1972, p. 18). How contact with other groups could have been prevented, when these other groups also formed the population of the Mission, would be something that strains credulity. Indeed, what if the opposite were true? What if, in a colony ordered by a racial hierarchy, the Mission Indians had been deliberately made to cohabit with members of other ethnic groups, knowing that the result would be miscegenation, and thus eventual removal from the Mission?
Ethnic Substitution
With the displacement of Indigenous residents of the Mission, which accompanied the rise of the cocoa industry, a new wave of migrants from Venezuela entered the area and furnished the workforce for the expanded industry. To get a sense of the magnitude of the immigration, Brereton (1979, p. 12) indicated that Trinidad’s population increased from 84,438 in 1861 to 200,028 in 1891. Some of the major cocoa estates in the Arima Ward Union included the Santa Rosa estate owned by C.G. Scheult; Buena Vista, owned by Jules Cipriani; and El Retiro, held by the De Martini family (Collens, 1896). Given that many of the migrants were of a similar cultural, religious, and ethnic background as the former Indian and Mestizo residents of the Mission, what transpired was a process of ethnic substitution and what then appeared to be a revitalization or resurgence of a number of key traditions and ritual practices, when viewed from a certain angle (Brereton, 1979, pp. 131–132, 152; Moodie-Kublalsingh, 1994, pp. 2–3, 4, 33, 41). In some areas, there was a fusion of the two groups, that is, the Indians already present in Trinidad and the Venezuelan migrants. The baptismal registers reflect all of these developments and transformations, except for the process of fusion.
See the book, ARIMA BORN 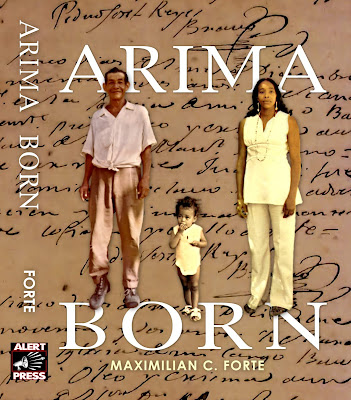