On June 29 2021 I volunteered at a summer camp program for children of immigrant workers from Central America to offer a Story-Telling presentation that featured the traditional creation narration of the ancient Maya, the Popol Vuh. The children really got into the fun of it, using the blowgun to "shoot down" Seven Macaw Wukub Kakix, playing the traditional Maya ball game and playing the role of Hun Ahpu and Ixbalanque. 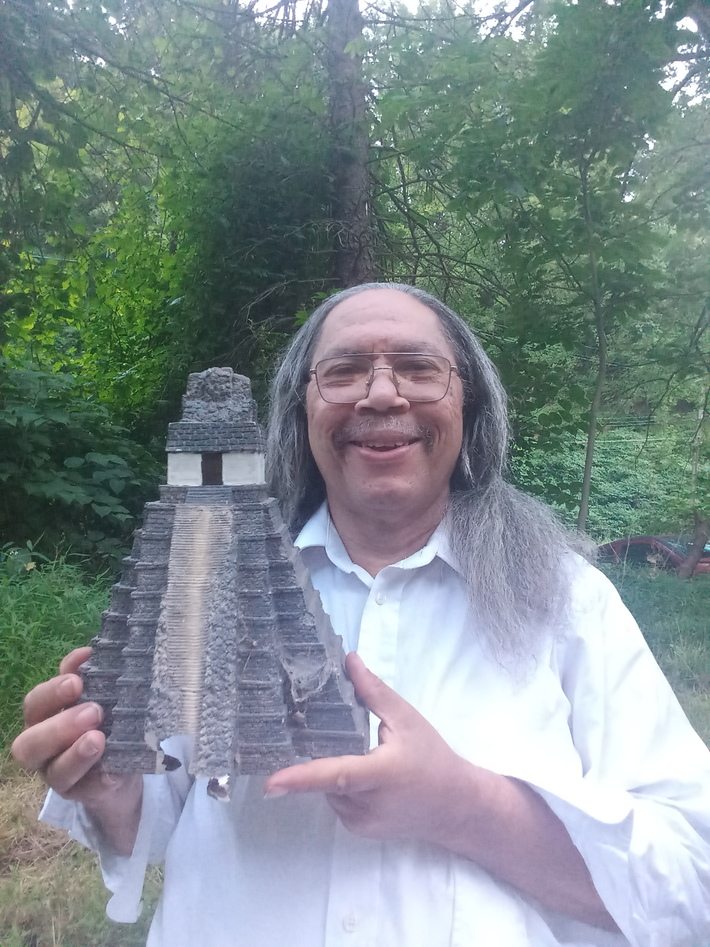 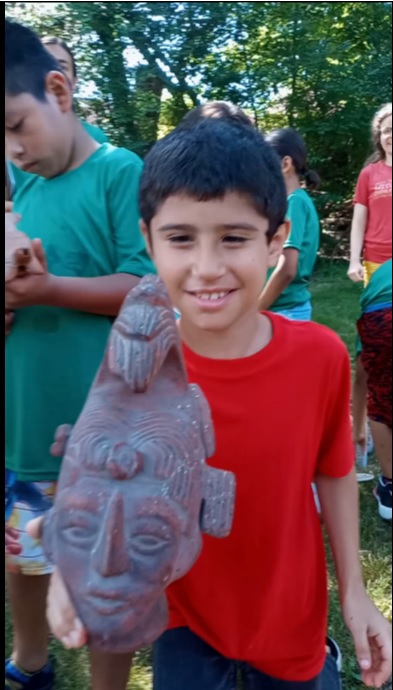 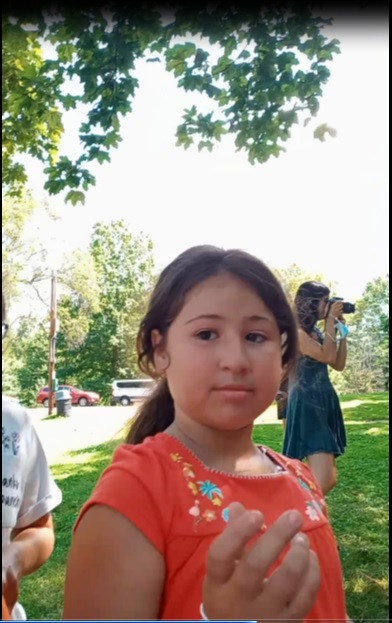 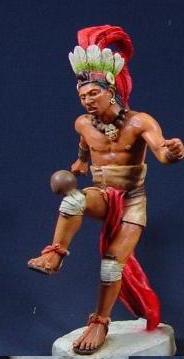 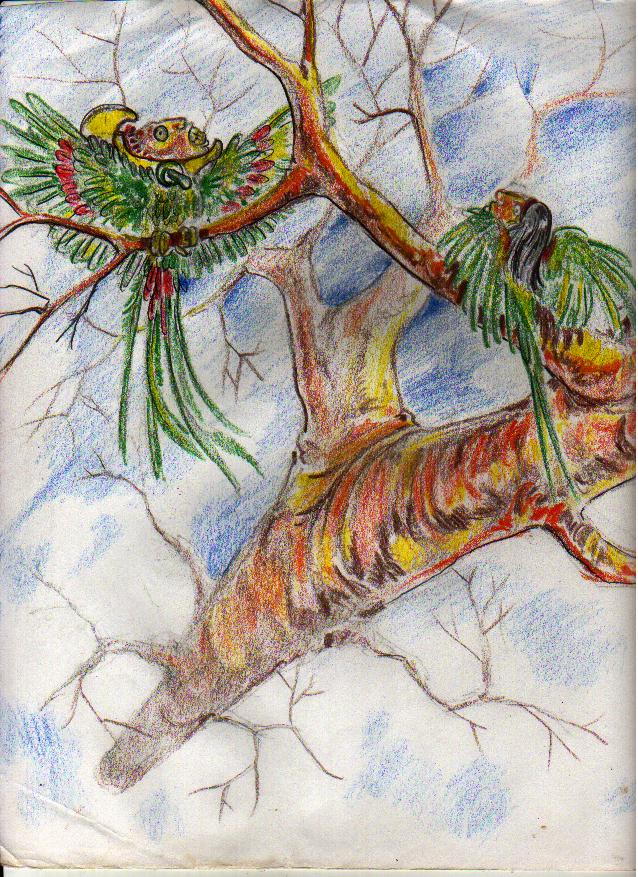 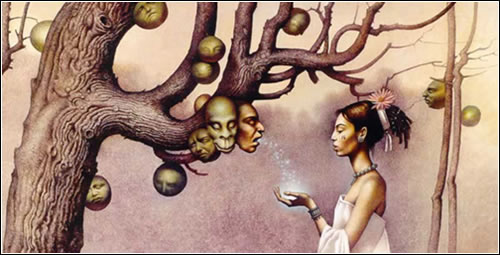 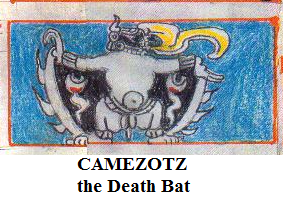 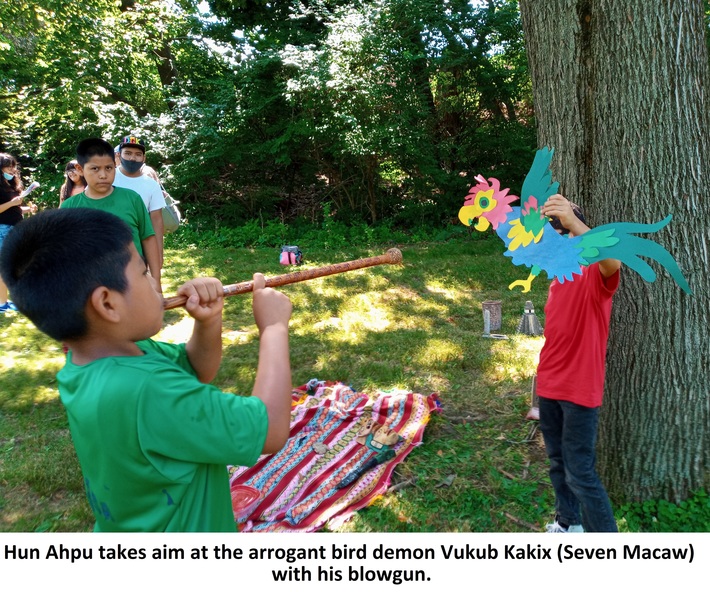 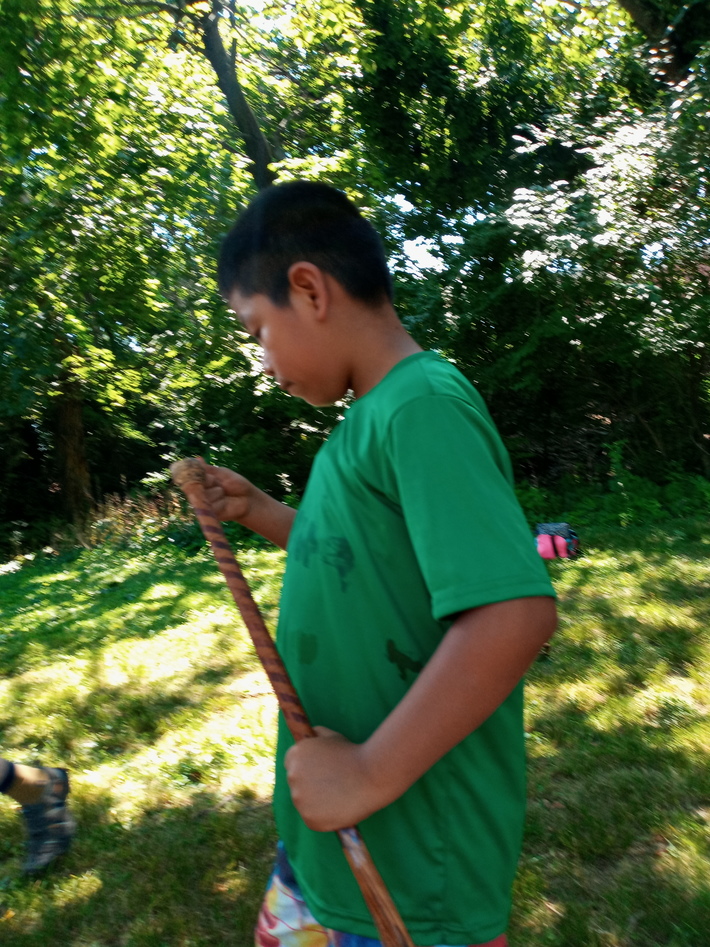 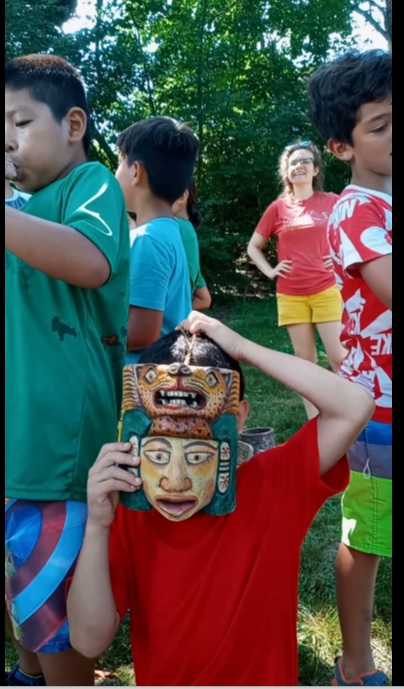 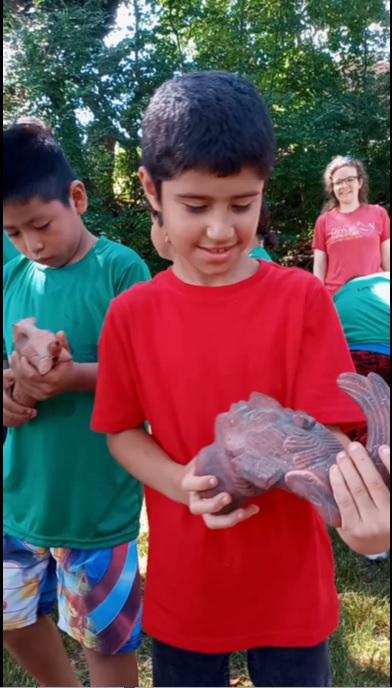 Depictions of Zipacna, the demonic son of Seven Macaw, in his manifestation as a monstrous crocodile. 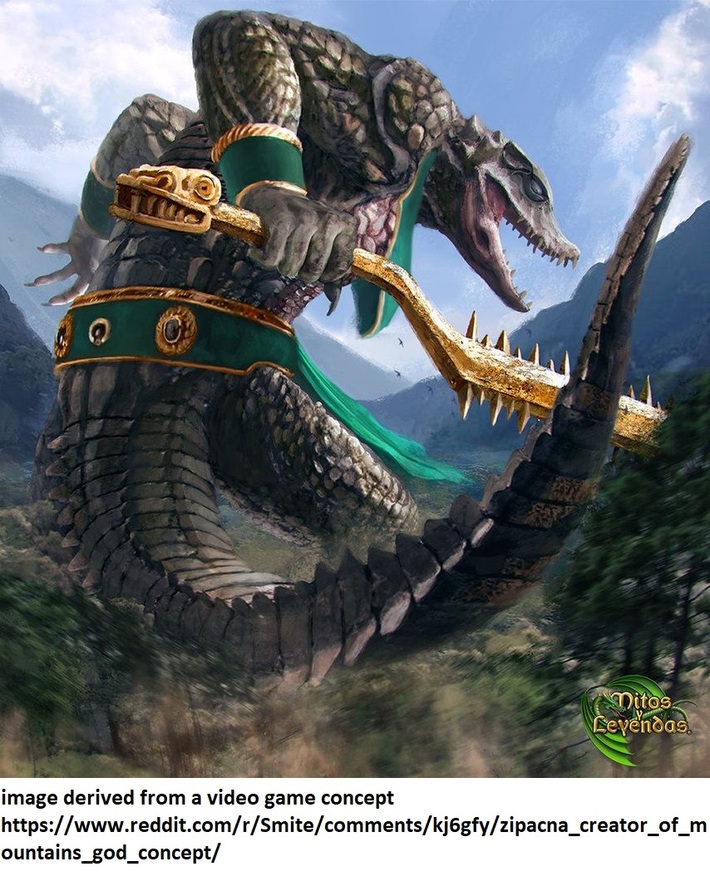 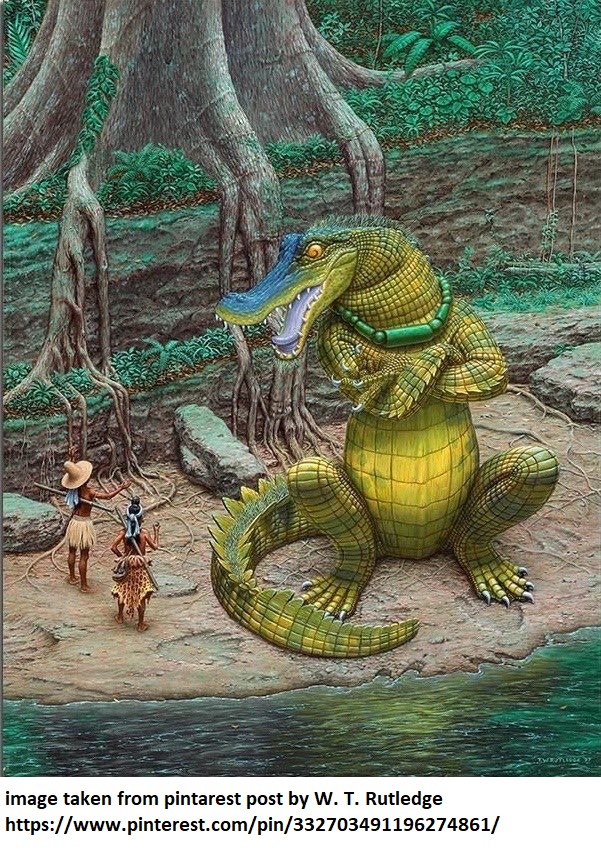 Some thoughts on The experiences of Hun Ahpu and Xbalanque with Seven Macaw and his two sons Capracan and Zipacna.

Here are illustrations by Diego Rivera depicting the moment that Xbalanque repairs Hun Ahpu's arm after it was torn off by the angry injured demon bird Seven Macaw, and also the defeat of Seven Macaw's son Zipacna' This interesting article that was published in the COUNTERPUNCH online magazine on Nov 26 2009 expresses some interesting thoughts on the Popol Vuh episode of Zipacna and the bromeliad crab based on the writings of the great Swiss researcher Raphael Girard.

We Remember the Popol Vuh


Crawling down below Meauan Mountain, where ground meets sea level, the first grandson of America whispers a plot that will bury a bad god forever.  The crawling insurrectionist is Hunahpu, Jr. and there on the whiteness of a giant pyramid stone at Mirador, Guatemala you can see the young genius at work, with the head of his father strapped tight to his sash.

If Hunahpu, Jr. does not get the words exactly right, if the crab that he conjures from flagstone and bromeliad does not obey precisely, then the arrogant clan of old gods will persist one day longer.  Zipacna, who calls himself the mountain maker, will not be buried under the weight of his own prideful production.  Hunahpu’s grandmother will have to mark the day wasted.

Because it falls now to the grandson to conquer the wicked gods in grandmother’s name, we watch this subterranean subterfuge through grandmother’s x-ray eyes.  That dirty god Zipacna must be teased into submission and buried face up.  Since this is the fifth time the good gods have experimented with the creation of humankind–if we count the chattering creatures, the mud people, the stick people, and the decapitated generation of Hunahpu, Sr.–we can see how grandmother is running out of options.

Of course we also know that Hunahpu Jr. is the star of a long and proud story that ends happily with our corn-fed existence above ground.  Like some 2,300-year-old serial drama, the story of the Popol Vuh wraps around the base of the Mirador pyramid, its images of hope reflected across the surface of a memoried waterwork.  Onward and upward the story unwinds, until life triumphs over death.  The ball-game episodes would play well on ESPN.

CNN dramatizes this year’s archaeological sensation by raising a specter of suspicion.  “Some say” that the Popol Vuh was never really handed down to us by Mayans.  “They say” it could be a post-conquest corruption.  True enough, Christian officials of Yucatan burned all the Mayan libraries during the 1570s.  Why would they not attempt to displace Mayan memory with fraud?  But there are all kinds of Christians making history, and the carving at Mirador seems to prove that the priest who made it his business to preserve the Popol Vuh circa 1701 wrote down authentic words.

Conflict and suspicion are good for a story and serve to sell the pictures that come with it.  But in the case of the Popol Vuh there was no need to worry very much about the authenticity of its ancient genius.  Raphael Girard after three decades of experience in the Mayan regions learned to see the Popol Vuh everywhere he looked.  It is the classic text of America and its heart beats behind the life of native cultures up and down the Western Hemisphere.  Corn, beans, tobacco, rubber balls, and spirits coming at you from six directions of every crossroads—don’t forget up and down.

In 1948 Girard argued that the Popol Vuh is like the Mayan encyclopedia of everything: astronomy, mathematics, zoology, agriculture, history, comprehensive sex education, and the ethics of The Hunahpu Code.  Get on the bus tomorrow at 5:30 am and see the industrious man of America for yourself–hombre trabajador–still growing the world against sinister odds.  On Thanksgiving we remember authentic words who refused to be forgotten.  And we try to remember how to be grateful for them.

Based on the plants and animals named in the Popol Vuh, Girard argued in 1948 that the epic must have been composed along the Pacific Coast of Guatemala.  In 2006 at La Blanca, archaeologist Michael Love unearthed a scooped-out four-leaf clover which he dated to 900-600 BCE.  Old as the books of Moses, that clover basin would have been filled with water six feet across for ritual re-enactment of the first creation when Heart of Sky conferred with Plumed Serpent and conceived the possibility of an existence that could count the days and keep them well: grandmother’s Hunahpu.

Therefore, we mark Thanksgiving Day to re-bury the gods of arrogance under the very stuff they claim to control.  We drink to underground genius that makes a day well made.  Messages in stone unbury themselves to whisper spirits unconquered.  We remember the Popol Vuh.

GREG MOSES is editor of the Texas Civil Rights Review and author of Revolution of Conscience: Martin Luther King, Jr. and the Philosoph.... He is a contributor to Red State Rebels: Tales of Grassroots Resistance in the Heartland, published by AK Press. He can be reached at: gmosesx@gmail.com

Greg Moses writes about peace and Texas, but not always at the same time. He is author of Revolution of Conscience: Martin Luther King Jr. and the Philosophy.... As editor of the Texas Civil Rights Review he has written about racism faced by Black agriculturalists in Texas. Moses is a member of the Texas Civil Rights Collaborative. He can be reached at gmosesx@gmail.com This is an image of an actual red crab of the type that the giant Zipacna wanted to eat.

These are the objects that Hun Ahpu and Xbalanque used to create their fake crab, a bromeliad plant and a smooth red stone. This is how they placed the stone at the center of the bromeliad plant so that the long slender leaves could imitate the legs of the crab. They trimmed off a few of the leaves so that it would look a little more like a real crab. Finally they painted a couple of round black eyes on the stone.

And PRESTO! now their fake crab looked very much like the real crab and they were able to fool Zipacna.