Hey everyone, I just caught this story in the New York times today (there is also a slideshow in the article):


December 2, 2008
Tradition Counts More Than Beauty at a Pageant
By DAMIEN CAVE

JAYUYA, P.R. — The seven girls posed, preened and smiled with all the energy of Miss Universe contestants, but this was no ordinary pageant.

The competitors, from about 6-years-old to 16, had just paraded through a downpour to a small stage surrounded by mountains, where they displayed elaborate outfits handmade from wood, plants or, in one case, jingling shells. And the judges also sought a special kind of beauty: those who most resembled Puerto Rico’s native Indian tribe, the Taíno, received higher marks.

“It’s different,” said Félix González, president of the National Indigenous Festival of Jayuya, of which the pageant is a part. “It’s not white culture and blue eyes; it says that the part of our blood that comes from indigenous culture is just as important.”

Puerto Ricans have long considered themselves a mix of African, European and Native American influences. But since the 1960s, the Taíno — a tribe wiped from the Antilles by European conquest, disease and assimilation — has come to occupy a special place in the island’s cultural hierarchy.

The streets of Old San Juan are lined with museums and research centers dedicated to unearthing Taíno artifacts and rituals. Children are taught from a young age that “hurricane” is Taíno in origin, from the word “huracán,” while no Latin pop music concert is complete without a shout out to Boricuas — those from Borinquen, the Taíno name for Puerto Rico, which means “land of the brave noble lord.”

The ties may be more than cultural. In 2003, Juan Martinez Cruzado, a geneticist at the University of Puerto Rico at Mayagüez, found that at least 61 percent of Puerto Ricans possess remnants of Taíno DNA — and nearly all seem to believe they belong in that group.

“The Indian heritage is very important because it unites the Puerto Rican community,” said Miguel Rodríguez López, an archaeologist with the Center for Advanced Studies of Puerto Rico and the Caribbean, an independent graduate school in San Juan. “There is a feeling that it represents our primary roots.”

He added, “It is our symbolic identity.”

In Jayuya, a town of a few thousand people in the mountains north of Ponce, Taíno celebrations began decades ago. When local leaders discovered in the mid-60s that the town was named for a Taíno chief, they commissioned a sculpture to honor him. It was dedicated in November 1969 at the first indigenous festival, and every year since, the chief’s stern eyes have looked out over the event from a perch above the central plaza.

At times, he has been forced to share space with the more modern forces that decimated his people. One of the city’s major archaeological sites, discovered here two years ago, sits across from a Burger King. And before the pageant began on Saturday night, a performance of traditional Taíno dance competed with a pop song from Maná, Latin America’s biggest rock band.

Mostly though, the Taíno influence in Jayuya seems to have merged with its surroundings. The standard Taíno sun symbol, called a guanin, is now carved into the Spanish-style plaza. Many of the crafts being sold at the festival, like jewelry, purses and soap, also included Taíno symbols.

And even the pageant is a hybrid. Actual Taíno women wore only loincloths. But with the influence of local teenagers, the costumes have become exponentially more extravagant A few years ago, organizers had to limit their size to 8 feet high by 6 feet wide.

Even with those boundaries, which, of course, the teenagers tried to push, the costumes amounted to a mix of homecoming queen, Halloween, “Last of the Mohicans” and Las Vegas showgirl.

Mr. Rodríguez, the archaeologist and a former judge of the pageant, compared it to Brazil’s carnival. “It’s a sincretismo,” he said, using the Spanish word for “syncretism.” “They mix different cultures, different beliefs.”

Some scholars have scoffed at the concept, saying it is more a reflection of the joke that Puerto Ricans love festivals enough to have one for every cause or crustacean. But Mr. Rodríguez defended the idea. “You have to enjoy it because it’s for the people,” he said.

The contestants clearly love it. Natalia Fernandez, 16, said she had spent a month and half building her outfit, which required her to carry on her back a wooden Taíno dancer weighing at least 25 pounds, with a sprout above his head the size of a small coffee table.

Her bangs had been cut, her dark hair was straight (in a nod to what is considered Taíno style) and her naturally copper-colored skin made her appear as Native American as Chief Jayuya. But she was also 100 percent teenager. Asked before the contest how she thought she would do, she fiddled with her cellphone and said, “I’m going to win.”

The event started an hour late, and the rain and competition seemed to surprise Natalia. She frowned under the downpour, looking chilled with a bare midriff and no shoes, as she glanced nervously at the girl with shells and starfish netted in a four-foot-high headdress.

But her fears were unfounded. After all the girls introduced themselves and explained their outfits, the judges called Natalia’s name last, like all great pageant winners. Her friends and family cheered loudly from beneath umbrellas as she smiled and twirled for the digital cameras.

“It’s about a beautiful culture,” she said before taking the stage. “It’s not about just beauty.”

Permalink Reply by Arenahi on December 2, 2008 at 12:37pm
Has anyone been to this pageant? I'm concerned that the contestants are rated on how much they look Taino. Is this true? I read about that in the Taino revival book but didn't really believe it.

Permalink Reply by Juan Almonte on December 2, 2008 at 12:55pm
Hey Keisa, I had never heard of this. Even though i have had many discussion on atropolgogical trates that still remain in tiano deccendants. I dont think a pagent or any type of contest based on looks is the way to go. Hopefully this is not the case.

Permalink Reply by Rixturey on December 2, 2008 at 8:51pm
I have been to the Jayuya Festival 3 times (the last in 2004) and it tries to be respectful of the native traditions. It has been in existence for over 20 years. Because it is a festival there is food and drink. Many artisans take the opportunity to sell their creations. People come from all over the island to participate. There is also jibaro music as well as a little bit of salsa and bomba y plena.

When I saw the pageant I felt the young women worked really hard to make their costumes representative of the Taino culture. The costumes are totally created from indigenous materials and work within the theme that is decided upon each year. The age range of the contestants is wide and they are basically all local girls. Also, there are attendants that help the young lady on stage with the heavy costumes as well as act as celebrants in a stylized way. There is definitely a friendly competition.

The festival also had presentations of the batu game (with both men and women's groups).

Since I didn't go this year, I can't say how it all turned out. I did look at the slide show and it was more about the preparation of the young girls than the festival. The author could have noted that even with the rain the crowd stayed and cheered on their favorites. He could have mentioned the procession of contestants and their fabulous regalia. (One year I was there and it did rain and the crowd stayed on.)

If he had taken the time to know the residents of Jayuya, he would have noted the pride in their voices when they say they are Taino. He could have visited the Museo del Cemi or La Piedra Escrita. He could have talked to the many vendors that base their craft on native symbols and technique.

Even though this was a "modern teenager", she didn't have to take the time and effort to make a costume, go on a stage and compete with others. She could have gone to the mall. But she chose to honor her culture and the tradition of her town of Jayuya whose citizens are rightly proud.

I hope to go again to Jayuya, a beautiful town set within the valley of the 3 Picachos mountains. I am also including a photo I took of one of the presentations a few years back. 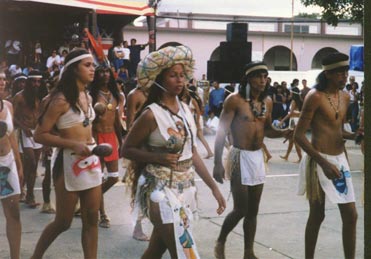 Here is an image of a vendor of hand made hamacas from Boriken.