Kalinago Dance Is identical To Cordon

The arm and foot movements performed by the Kalinago dancers on the island of Dominica are almost identical to those performed by dancers of the Cordon Spiritist sect in the remote rural region of Monte Oscuro in Cuba. These same arm and foot movements are performed by participants in the traditional dances of the various Arawakan tribes people on Guyana in South America such as the Lokono and the Wapishana. It is important to note that although the Kalinago are typically identified as "Caribs" a great deal of their language (especially the so-called "women's tongue") is of Arawakan Taino derivation.

I participated in this dance  when I visited the Kalinago reservation on the island of Dominica in 2007. Here is a brief video clip that I filmed during that visit. 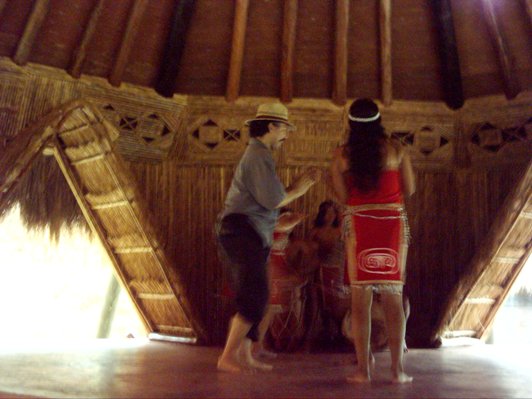 Above this is a photo of me when I participated in the Kalinago dance in 2006.

Below is a sample of the Cuban Cordon dance which is derived from the ancient Taino tradition and whose arm and foot movements are almost identical to the Kalinago dance.

Below are samples of Arawakan Indigenous dances from regions in South America where the ancestors of the Taino originated and from where they set out to colonize the Caribbean islands over 2,000 years ago. Please note that these dances also contain arm and foot movements that are identical to those of the Kalinago.

Arm and foot  movements in the Cordon Dance of Cuba