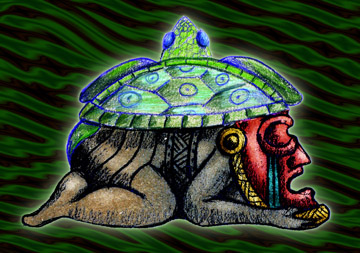 As soon as they came to the door of Bayamanaco, the old man and saw that he carried cazabe (bread made from cassava flour), they said “Ahiacabo guarocoel!” which means, “We know our grandfather!” In the same way, Deminan Caracaracol, seeing his brothers ahead of him, entered to see if he would be able to get some cazabe.

Upon entering the house of Bayamanacoel, Caracaracol asked for cazabe. He (Bayamanaco) put his hand to his nose and threw upon (Deminan’s) back a guanguayo (spittle). This guanguayo was filled with cohoba which had just been made for that day. [Cohoba is some kind of powder that they take at times for purification and for other effects described below. Cohoba is taken in a reed about half as long as one’s arm, and they put one end in their nose and the other in the powder. Then they inhale through the nose and this greatly purifies them.]

Thus were they given this guanguayo, spittle, instead of the bread they make. He [Bayamanaco] left there very indignant because they had asked for it ... after all this, Caracaracol returned to join his brothers and he told them what had happened with Bayamanco(el) and of the blow that had been delivered to him by the guanguayo upon his back, which hurt terribly. Then his brothers looked at his back and they saw it was seriously swollen. This swelling grew so much that he was at the point of dying. They then sought to cut it off but were unable. Taking a stone axe, they opened it and out came a live female turtle.

Thus they built their house and took care of the turtle. All of the brothers used her in turn, and from her their sons and daughters were born.

An Account of the Antiquitites of the Indians, Diligently Gathered by Fray Ramon Pané, A Man Who Knows Their Language, by order of the Admiral [Christopher Columbus].From the translation by José Juan Arrom (to Spanish) and Susan C. Griswold (to English).

Comment by Miguel Sague Jr on December 16, 2008 at 9:23pm
Tau Sister RixTurey
This is also one of my favorite sacred narrations of our ancestors and my interpretation is very similar to yours. The parallels and similarities between this wonderful narrative and the sacred narratives of the people of the Orinoco River Rainforest are astounding and I would urge you to read what our Arawak and Carib relatives of South America have to say so you also can enjoy these similarities.
taino Ti
Miguel Sobaoko Koromo Sague