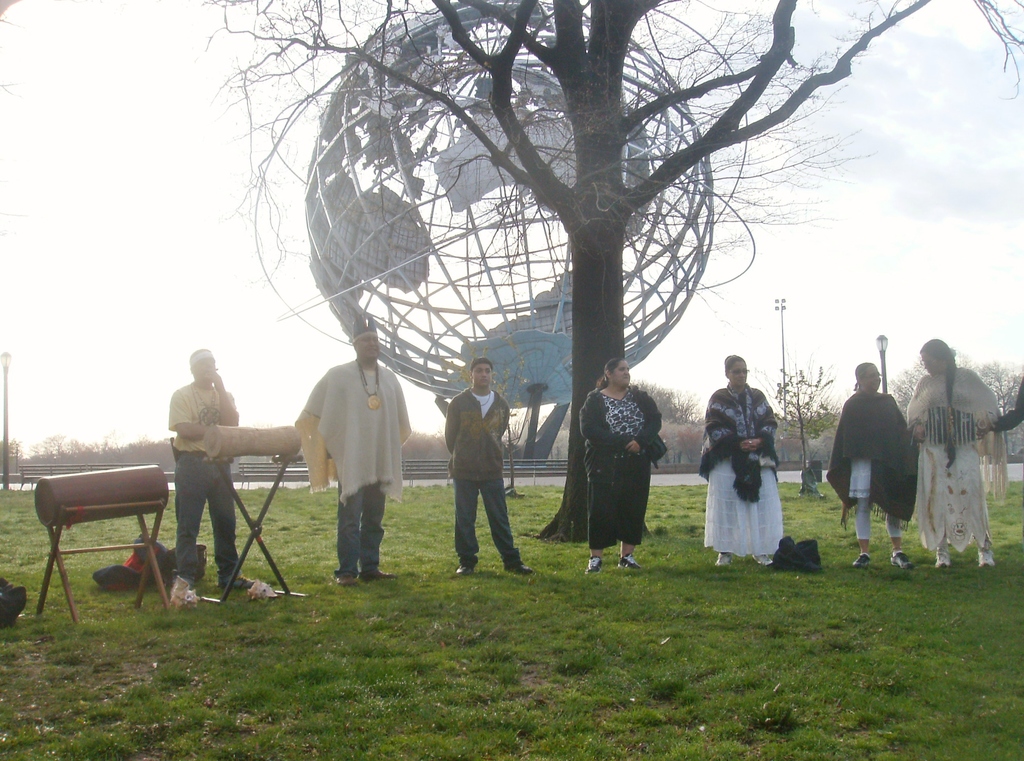 This past Sunday April 24 2011 (Maya date "Wukub E" or "Uuc Eb" also know as "7 Road") a group led by the young Taino organizer Rafael Landron and Taino leader of the women's group Bohio Ata Bey, Vanessa Inarunikia Pastramo gathered for sacred ceremony at Flushing Medow Park in Queens, New York to initiate pre-event activities that will lead to full Taino participation in next year's trans-continental PEACE AND DIGNITY JOURNEYS .  I attended the event in the company of my friend Roberto Mukaro Borrero, director of the UNITED CONFEDERATION OF TAINO PEOPLE and the kasike of the New York-based Taino community YUKAYEKE GUAINIA. I was granted the honor of leading the opening ceremony of the event. With blasts of the guamo shell trumpets, wafts of purifying tabonuco (copal) and tobacco smoke, and water from sources on the island of Boriken we honored the four sacred cardinal directions and appealed to the protector spirits of both Ata Bey, the Cosmic Matriarch, whose identity as the soul of Mother Earth was being honored on that day, being it part of Earth Day weekend in the United States, and also our father Yoka Hu who embodies the spiritual essence of all energy in the Cosmos.

After the opening ceremony our sister Inaru and our brother Rafael led the participants in the invocation of the sacred staffs that were to be carried by the runners during the run around the reservoir there at the park on that day, and eventually on the longer runs in November in Kiskeya and in 2012 to Mexico. 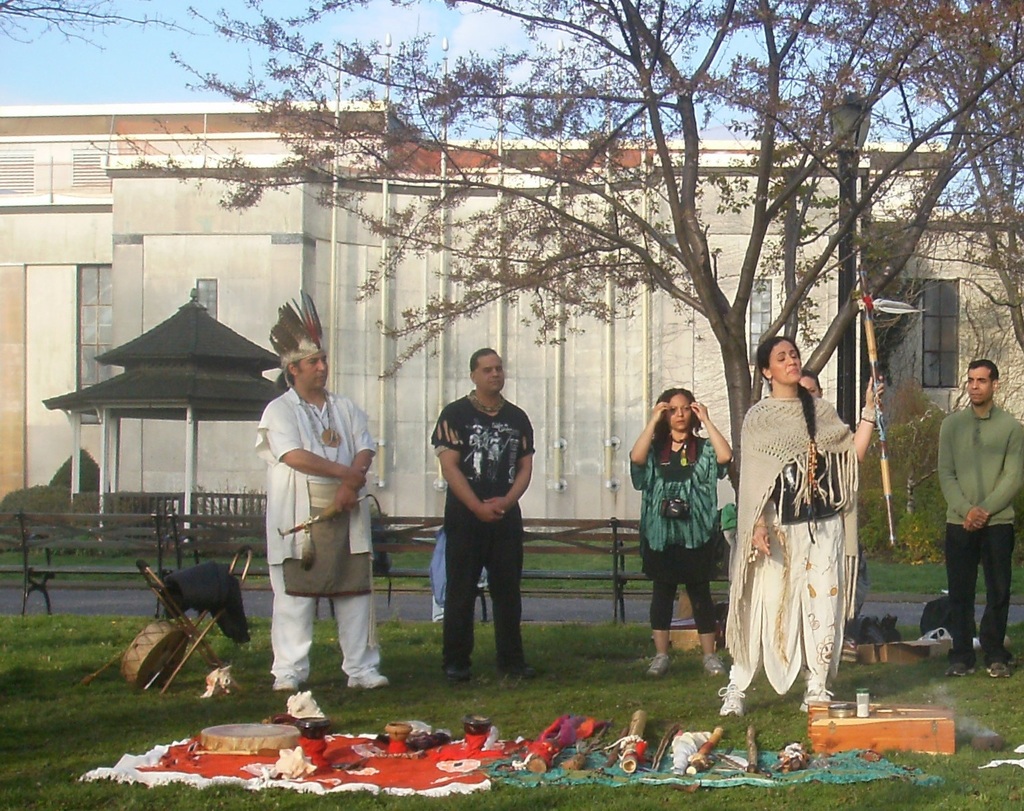 Each person who provided a staff to the run was given an opportunity to explain its significance.

After dances and chants which added sacredness and tradition to our event the group marched to the rhythm of more drum-beats and chanting all the way to the reservoir where the young men and women who had volunteered to run with the staffs were to circumnavigate the body of water. We were joined by other local Indigenous leaders and members of other Indigenous nations such as Jenny Luna and the Colorado sisters of the Mexica Nation. These women are important representatives of the Peace and Dignity Journeys movement in the New York area. 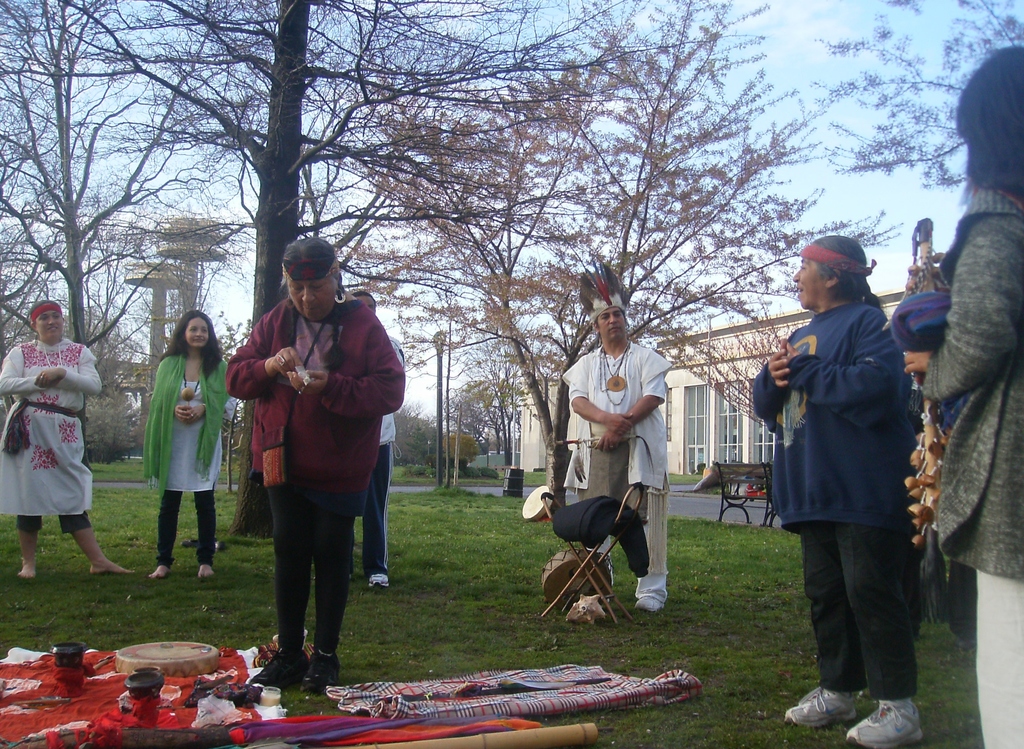 I want to thank Inaru and Rafael for organizing this wonderful event that provides yet another unifying impetus to our Taino people, and for invitng me to offer the prayers of our CANEY SPIRITUAL CIRCLE to the proceedings. I also want to thank Mukaro for a wonderful dinner within the warmth and hospitality of his beautiful family at his home on the evening before and the ride that he gave me to the park on the day of the run.

Wow, amazing to see these photos nine years to ten years after I ran the 1992. It brings up many wonderful and beautiful memories of songs prayers and meeting new relatives throughout the Turtle Island North American continent.

I remember meeting the 2000 P&DJ runners in Prince George, BC Canada and we were invited to smoke the Sacred Čanupa but we refrained because we didn’t want to interrupt the energy of the run plus I was in Prince George singing for Melvin Greybear/Dakota medicine man who was doing a Yuwipi ceremony that evening at the PG Native Friendship Centre and some of the runners showed up. Once the runners learned I had run the 1992 run several came up to me to shake my hand. It was pretty cool.

Even though I did not have the honor of spending time face-to-face with you at this event  (I had to leave before the activities were totally completed) I sense that our two souls were certainly together there on that day and I definitely can attest to your commitment to unity within our community.

I was there on the other side of the Park waiting for you guys. We had a talking circle several blessings and a celebration afterwards some food and socializing.

If I talk about Unity it also means that I must DEMONSTRATE Unity by supporting my Brothers and Sisters. Sobaoko You have done that consistently for the years that I have known you and I commend you for that.