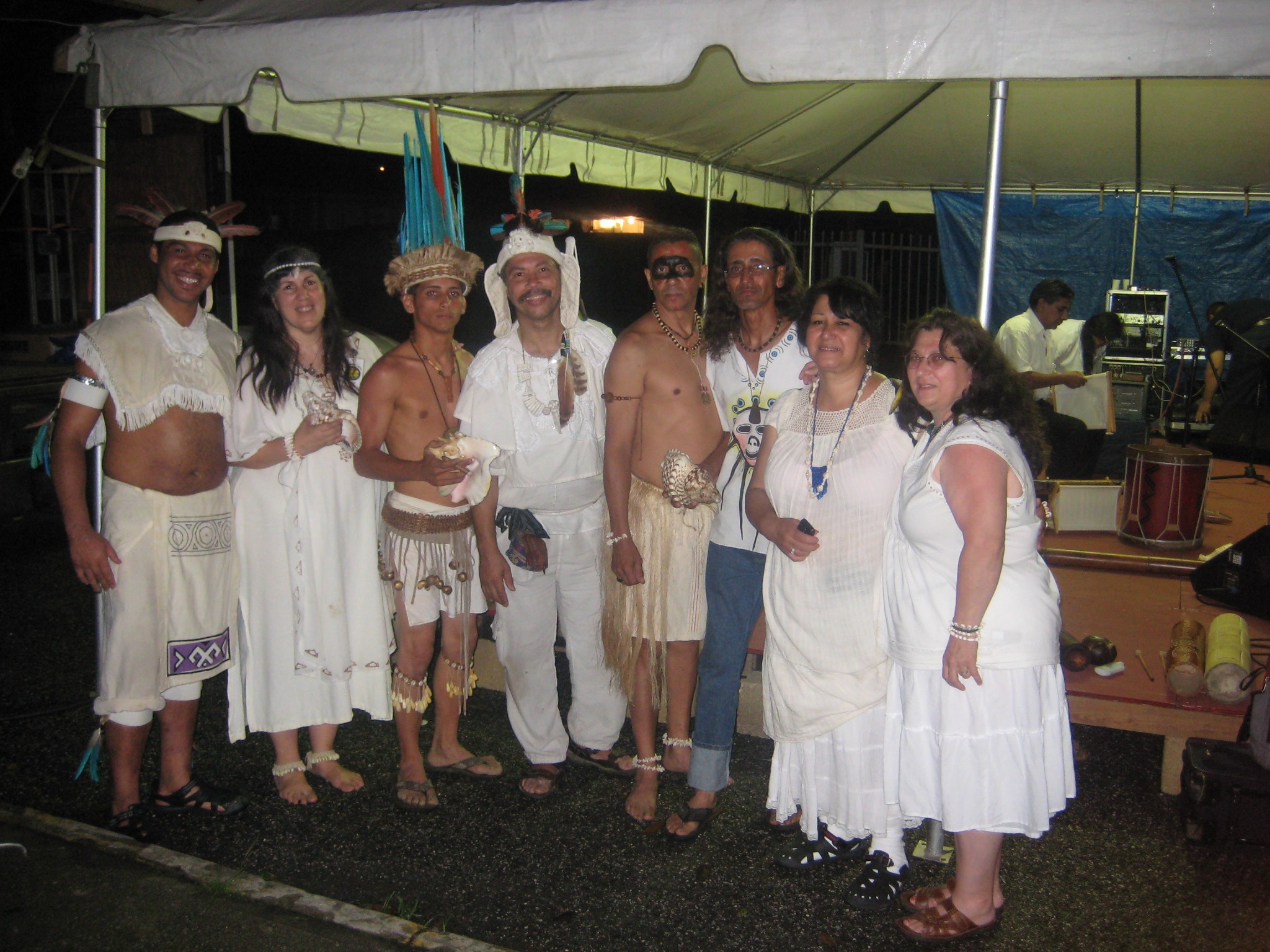 Tau My Relatives
On the weekend of August 15 I participated in the fourth annual Taino Indigenous gathering in Jayuya, Boriken. The traditional artisans and craftspeople of the central mountains again hosted hundreds of visitors from all over the world on the grounds of the Cemi Museum in the Barrio Coabey area this year, and the experience was predictably inspiring. I was invited by our Taino sisters Joana Soto Aviles and Maragarita Noguera, to offer a presentation on Taino spiritual tradition at the event as I had done last year. This time I was fortunate enough to be able to come to the gathering accompanied by my wife Lenia MaisGuariche who helped me sing the sacred songs of the Caney Circle, my son Miguel BanoManigua (affectionately nicknamed "Cha" by most of his family and friends), who played the mayohuakan and provided a third voice to the chorus, and by a family friend from Iowa, Maria Comito.

We were fortunate that there were several participants in the audience who graciously added the magic of their personal spirit energy to the presentation by volunteering to play important roles in the participatory portion of our offering, a ritual enactment of the seed-planting act.

This ceremony took on added meaning because it became part of our Full Moon prayer on that beautiul moon-lit tropical night. An enthusiastic Taino brother from the Bronx, Elliot Yabey Borges, who is a member of the Nacion taina De Las Antillas, and whom I had just met previously at a food stand accross the street from the performance area accompanied our presentation with his guamo shell trumpet (fotuto). Later in our presentation he played the role of sacred guaribo man opposite the kind participation of guariche woman of an equally enthusiastic female Taina participant whose name I unfortunately missed.

The participant role was rounded out by the bouyant mayohuakan playing of 7-year-old Yaya, daughter of another participating couple. The little girl had joined my son, Miguel BanoManigua and i by the sacred fire earlier in the day as we demonstrated mayohuakan playing and I did a little Taino story-telling for the kids taken from the traditional Taino sacred narratives. She ended up being BanoManigua's second drum during our presentation that evening.

The blessing of the sacred fire, which was kept burning throughout the whole weekend to the sound of a constant drum-beat, focused us all on the real meaning of the event, the fact that we were celebrating the resurgence of the sacred White Cemi, the entity that I have for decades identified a the Mountain Cemi, a spirit whose most significant message to our people is the message of reconciliation.

That same night my son and I were fortunate enough to participate, along with several other men and women, in a circle blessing ceremony around the sacred fire led by Grandmother Shashira and attended by Joana, Margaraita and a number of other prominent women of our people, including the leader of the Consejo General de Tainos Borinkanos, the Kasika Guama Elba Anaka Lugo. The kasika and her organization are intimately associated with the United Confederation of Taino People, led by my friend the Kasike Guama Roberto Mucaro Borrero. The Uctp had a special presence at the event.

In between moments of participation in the activities associated with the event, Leni, Cha, Maria and i had the opportunity to explore, experience and honor several of the region's most sacred sites. We took a dip in the healing waters swirling around the great petroglyph boulder of La Piedra Escrita, just up the road from the museum. We visited the ceremonial center of Caguana, near the town of Utuado and sang the chant of Ata Bey before the Cosmic Matriarch's petroglyph stone slab on the side of the main ritual batey field. We fell asleep to the lullaby of the coqui each night, and awoke to the brilliance of the sun spirit rising from behind the magestic peaks of the central higlands.

I hope all of those who read this record of our experience enjoy the images that I have included in my photo gallery, which show some of the highlights of our trip.