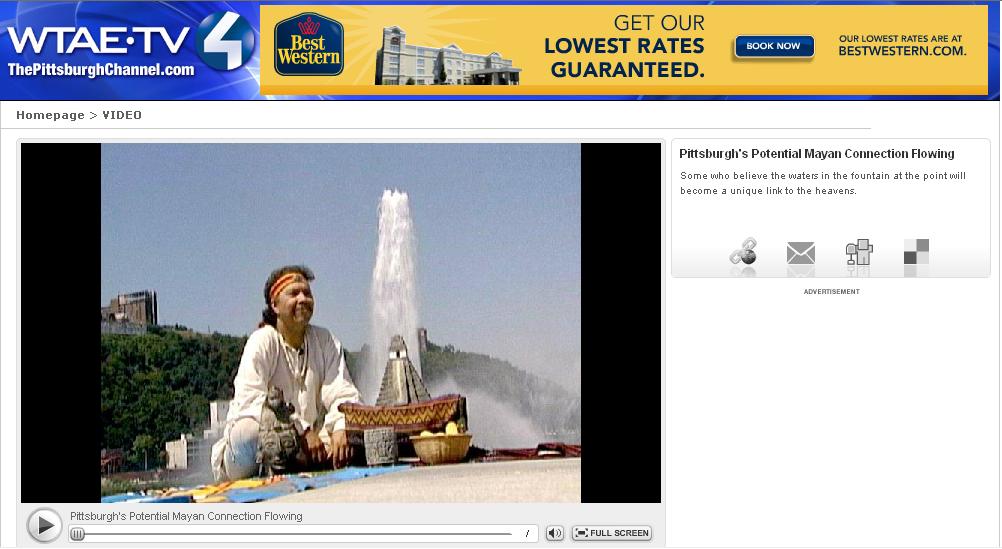 As some of you already know I have been studying the Mayan Calendar
since I was a teen-ager and in the year 2000 I was given a sacred
headband by elder Don Apolinario, Quiche Maya spiritual leader from
Guatemala to read and maintain the day count of the Mayan Calendar.
Before and and since then I have made several trips to the Maya
homeland in the Yucatan Penninsula and Guatemala to continue my
learning of this ancient tradition which is related through trade to
the tradition of our Taino ancestors.

Many of us here is the Pittsburg area perceive the convergence of
the two surface rivers, the Allegheny and the Monongahela which flow
together to form the Ohio, and the subterranian presence of the
glacial aquifer we call the "underground fourth river" to be a
junction of four sacred waters that, among other things, reflect
the four directions. We also view the physical connection that these
waters create between our region of western Pennsylvania and the
Gulf of Mexico destination of the Mississippi river where these
waters eventually end up to establish a sacred link of water between
this land here and the land of the Maya prophecy.

We are a group of Native and non-Native people here who have
committed ourselves to fulfilling the promise of brethrenhood
between these two regions and the wider, more global perspective of
reconciliation that this inter-regional relationship implies. Our
perception was confirmed by Grandfather Don Alejandro Perez Oxlaj
back in December when he visited our Western Pennsylvania region and
shared with us his blessing of our four rivers and his personal
perspective on the very real significance of Pittsburgh in the Mayan
Calendar prophecy. He specifically confirmed that these waters hold
deep and sacred meaning within the Mayan prophecy.

We here in Western Pennsylvania have associated the meandering route
of the three surface rivers to the ondulation of the body of the
sacred feathered serpent Kukulkan (Quetzalcoatl) of MesoAmerican
tradition. We have established a sacred relationship between the
Central American rattlesnake which inspired the Kukulkan tradition
and the North American rattlesnake so common in the surroundings of
the Allegheny river, north of Pittsburgh. We perceive the flow of
these rivers to reflect the flow of the Milky Way Galaxy as it is
understood by the Maya wise elders, who equate it to the sacred
Heavenly WORLD TREE, the sacred ceiba. and who also equate it to the
sacred path of truth and wisdom that they call the "Sac Be" the
WHITE ROAD.

I invite you to log on to the WTAE TV Channel 4 website and listen
to to the newscast yourself.
http://www.thepittsburghchannel.com/video/16929794/index.html

Comment by adem medina cardona on August 3, 2008 at 5:56pm
if the story is about you, then you can get permission from the television news to post the video, they will explain how. ask them not to set it to expire though
otherwise there are other ways I am not familiar with to copy the story, but i am unsure if the story is the property of the news broadcaster or when that changes.
i will try to ask a couple people i know about that and i will get back to you as soon as i am able
~peace.c

Comment by Miguel Sague Jr on August 3, 2008 at 5:32pm
I also had a few initial problems making it work but I know for a fact that its my connection because it works just fine on some computers and there are other computers in which i do experience difficuly.
I dont know how to transfer this to U tube but I would love if any of you out there who have experience in that sort of thing to put this clip in U-tube

Comment by adem medina cardona on August 3, 2008 at 5:00pm
i was unable to get the vidoe to play at that site. perhaps it is the fault of my connection. is there a YOUTUBE version?~c