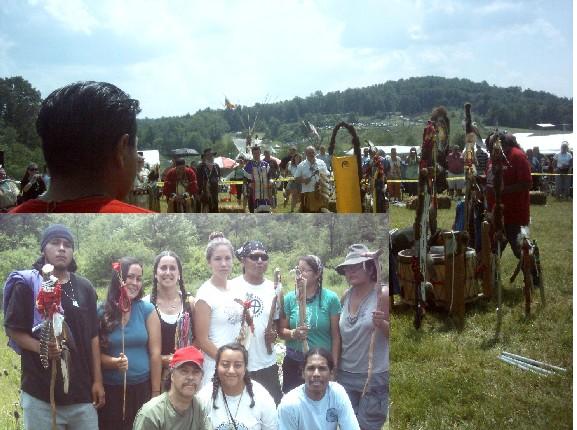 Tau My Relatives Members of the Peace and Dignity Journeys East Coast contingent arrived in Western Pennsylvania on June 18 2008. They converged with members of the Longest walk2 who were at the time on the verge of de-camping from the Raccoon Creek State Prk campsite. The runners stayed at the home of Caney Circle beike Miguel Sobaoko Koromo and
at the home of Council of Three Rivers American Indian Center member
residing in Pittsbrgh, Johnny Creed Coe.

On June 21st they were led by Miguel andJohnny to the Buffalo Nations Pow Wow in Farmington Pennsylvania about 70 miles south of Pittsburgh. The Pow Wow is held there at the Woodland Zoo every year since the birth of the sacred white buffalo
at that facility about three years ago.

Staffs from the Peace and Dignity Journeys joined the staffs of the
Longest Walk 2 Northern Route at the central altar of the Pow Wow
and were honored together by all participants to the strains of
songs by the singers of Pow Wow's host drum and the guest drum of
the Longest Walk group. Jennie smudged the staffs and the carriers
with copal smoke several times during the weekend as we performed
circle ceremonies. On Friday June 20, the day before the Pow Wow, I
was moved by the ancestors to construct a staff to join those
already in the Peace and Dignity assembley. The Caney Spiritual
Circle staff is a Taino staff. It is composed of a foot-and-a-
quarter length of wood taked from a limb of a tropical hardwood tree
native to Tekesta land in Florida. The wood has been inscribed with
three images, one is that of the SOL DE JAYUYA, the second is the
COKI PETROGLYPH from La Piedra Escrita in the Coamo River of central
Boriken, the third is the incised glyph representing the union of
male and female that we in the Caney Circle call the UNITY GLYPH.
The staff bears a bundle of healing Anamu herbs, a cigar from
Kiskeya, a shell ankle bracalet gifted to Miguel by the Kasika Elba
Anaka Lugo at the third Jornada Indigena Taina in Jayuya last yaer,
a necklace crafted in white coral by Taino beike Edgar Konuk, the
feathers of three of the four birds of the four directions, turkey,
owl, and hawk as well as an effigy of the fourth bird, the
hummingbird. The staff also bears a macaw feather, an eagle feather
and a large tail feather from an Andean condor that resides here at
the Pittsbugh aviary. A small hole was drilled into the wood of the
staff and a small quantity of ashes from the sacred fire of the
Third Jornada Indigena Taina in Boriken was enclosed in the hole.
This new staff was presented with ceremony at the teaching and
healing center of the Caney Spiritual Circle in Pittsburgh by Beike
Miguel Sobaoko Koromo to the organizer of the run's East Coast
contingent Jennie Luna. Jennie also received a ceramic pot crafted
by the Seneca people of western Pennsylvania and western New York to
represent the Council of Three Rivers American Indian Center of
Pittsburgh.

On Sunday the Peace and Dignity Journeys staffs were brought up to
honor the white buffalo in his enclosure at the zoo and then they
were taken out on Route 40 to resume their trek south out of the
area. I am honored that the Caney Circle staff will be carried by
the runners of the Peace and Dignity Journeys all the way to Panama
representing the Taino people in this important endeavor. I had the
honor of participating in that run, helping with the logistics of
escort vehicles and also running a fraction of a mile on the
mountanous terrain of the Laurel Highlands.
Please check out the new photos taken at the Farmington Pow Wow and
uploaded to our photo album at the Sobaokokoromo2 Yahoo Group's
website in the file titled "LONGEST WALK".

The blessings of the Caney Circe go with all of the runners and
walkers of both the Longest Walk 2 and the Peace and Dignity
Journeys.