In this blog I want to share with you the research that I have carried out concerning the ancient dance tradition that appears to be a fundamental element of Arawakan culture. It is a tradition that becomes evident in a large number of Arawakan groups inhabiting areas of mainland South America such as Guyana and Suriname, as well as in the Kalinago reservation on the Caribbean island of Dominica and among the mixed-blood residents of remote rural regions of Cuba.

The following video demonstrates the highly syncretized dance tradition of Cuba known as the Cordon Dance. I recorded this video in 2014 in the remote rural region of Granma prvince called Monte Oscuro. This video has been watched by over 7,000 viewers in Youtube and has been cited as a source in at least one scholarly research paper by University of Miami professor Jorge Luis Morejon  called FROM AREITO TO CORDON. It shows the mixed-blood residents of a region of Cuba which maintained a strong Taino cultural influence even after heavy ethic mixture of both Europeans and west Africans.

I have discovered that there are two important elements of this dance tradition that appear to be evident in practically every manifestation or version of its performance. These two elements are the foot movements, and even more remarkable, the arm movements. This second feature of the dance tradition (the arm movements) exhibits amazing uniformity from tribe to tribe and from community to community all the way from Suriname and Guyana in the South American mainland, north into the Caribbean islands through Dominica clear to the westernmost reaches of its coverage in the Oriente region of Cuba, in other words, everywhere that the Arawakan people exist or existed and where Arawakan culture still can be detected. 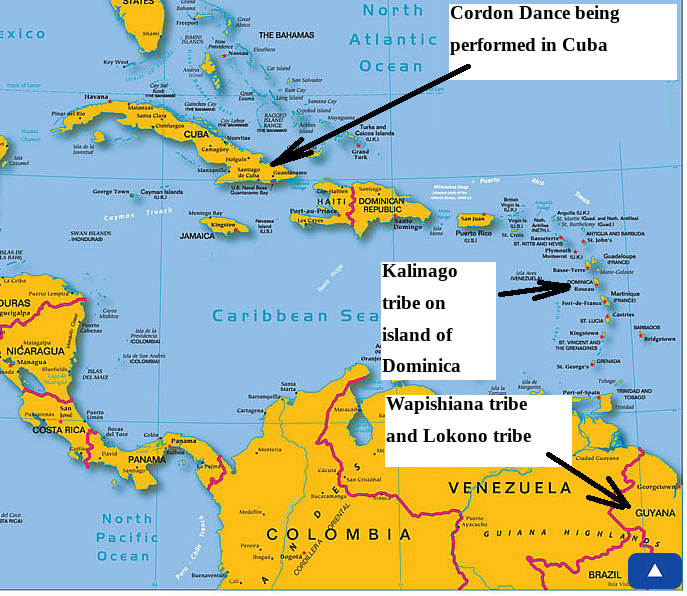 The most important feature of the distinctive arm movement is the back-and-forth, up-and-down swinging motion of the arms, performed in unison (both arms at the same time). In many of the various communities this motion is initiated while the participants are holding on to each others hands but oftentimes this either devolves into a "hands-free" manifestation or the holding of hands may not happen at all and the participants go straight to the hands-free arm swinging.

Here are some examples of Suriname Lokono dancers performing the hands-free version of the dance tradition.

Please click this LINK to see another example. In this improvised Guyana Lokono family reunion party some of the participants hold hands while others do the dance hands-free but they all swing the arms back-and-forth, up-and-down.

The Wapishana are an Arawakan tribal group living in modern-day Guyana not far from the Lokono. In this video that I recorded in 2016 you can see a group of Wapishana who were visiting New York City perform their traditional dance all in a row holding hands and swinging the arms.

On the Caribbean island of Dominica I recorded this traditional Kalinago dance in 2007. Please note the identical arm-swinging movements. The tradition and language of the Kalinago (also known as Island Caribs) is highly influenced by Arawakan culture and genetic mixture.

In his ground-braking book HUELLAS VIVAS DEL INDOCUBANO (Living traces of the Cuban Indians) the Cuban scholar Jose Antonio Garcia Molina lays out the result of a detailed research project that demonstrates the Taino (Arawakan) roots of the Cordon Dance.

His performance of the dance demonstrated the distinctive arm and foot movements that make this dance so readily recognizable as a uniquely Arawakan tradition that our Caribbean island-dwelling Taino ancestors surely manifested over 500 years ago and which they themselves had inherited from even more ancient people that migrated into the Caribbean region over 2,000 years ago and brought this dance with them from its origin place on the banks of the Orinco River in the South American rainforest.

In our current era we in the Caney Indigenous Spiritual Circle teach our own version of this dance set to the rhythm of music which mirrors the chants of the Cuban Cordon but which uses Taino lyrics instead of the Spanish Kardecian prayers of the Cuban mixed-culture sessions. By doing this we have recovered the original Taino healing elements of the tradition and left behind the layers of European mixtures that it has picked up over the last 500 years.