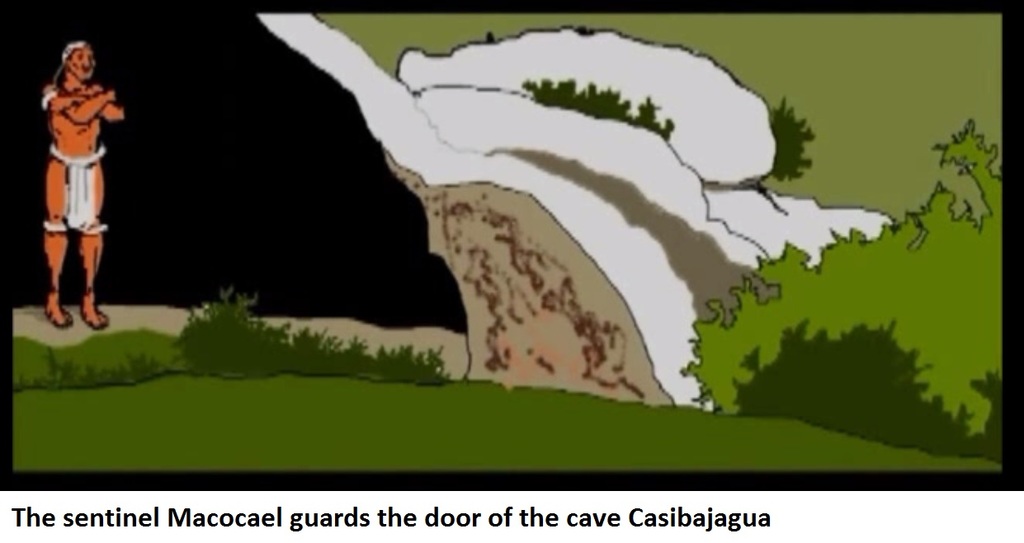 I would like to offer here a graphic diagram based on the work of Sebastian Robiou Lamarche. Robiou-Lamarche created a brilliant diagrammatic analysis of the Taino mythic cycles as derived from the writings of Fray Ramon Pane. In his analysis Robiou-Lamarche interpreted the sequence of events in the mythic story to have been put out of order by Pane by mistake. This is in accordance with the interpretation of Jose Juan Arrom. He proposed that instead of presenting the legend of Yayael and Deminan after the legend of Guaguyona, as it appears in Pane's writings, that the order of these events should be reversed. He proposes that the story of Yayael should appear first to fit the interpretation of Yaya as the supreme divinity and first existing entity. Then he sugests that this be followed by the story of Yaya's son, Yayael, with the associated story of Deminan following that. And then he proposes that the story of Guahayona go last. We in the Caney Circle have studied this work by Robiou-lamarche and accept almost all of the analysis but we have come to the conclusion that the order of events in the myth cycle should appear exactly as Pane wrote it. This means that the story of Yayael should come after the story of Guahayona. We accept that the name Yaya indeed represents the supreme deity, a being who is a balanced combination of the male Yokahu and the female Atabey, a father-mother entity just as Robiou-Lamarche describes in his book. However we believe that the Yaya represented in the Yayael legend is NOT that same person. This Yaya that Pane speaks of is a different person, a human being, not a divinity. This Yaya lives in a human-made hut and has cultivated fields that must be tended regularly. This Yaya has a human son that eventually dies, just as Yaya must also die after old age. Because we must differentiate the human Yaya that Pane speaks of in his writings from the divine Yaya that we know has been recognized by ethnologists and liguists then we in the Caney Circle have enhanced the names of the two Yayas. The supreme being is called YAYA GUATUREY (Yaya Our Heaven), and the human Yaya is called YAYA LOCUO (Locuo is a name by which the related Caribs identify the first human). Now that we have identified these elements of the story and placed the myths in the original order as Pane proposed we feel that the story makes sense. We have revised the excellent graphic diagram created by Robiou-Lamarche to fit this analysis and have adopted this revised adaptation into our belief system. Please see here our revision of Robiou-Lamarche's diagram. This is our revised version of Robiou-lamarche's diagram. Our revision is based on our own reserach.

This is an analysis of the circular Cosmological diagram designed by the scholar Sebastian Robiou Lamarche. In this video we present the Caney Indigenous Spiritual Circle interpretation of Taino cosmology as derived from the research of that esteemed scholar but presented from our own perception of the concepts contained therein.

This is an analysis of the circular Cosmological diagram designed by the scholar Sebastian Robiou Lamarche. In this video we present the Caney Indigenous Spiritual Circle interpretation of Taino cosmology as derived from the research of that esteemed scholar but presented from our own perception of the concepts contained therein.

Takahi Nelson...I don't remember if I ever answered this series of questions so I a want to do that now.

2.) I am not sure why Robiou Lamarche left out the yuca harvest and concentrated on the two maize harvests. This should be investigated further.

4.) No...the two words "heroe" and "gravedad" are not supposed to be read in conjunction with each other in the form of a phrase. They are simply in the same space signifying the fact that in this quarter of the cycle heroes routinely suffer some sort of physical malady or sickness or serious injury. Notice that in this point n the cycle of Guahayona he gets sick and requires healing from Guabonito. Likewise at this point in the cycle Yayael is mortally injured by Yaya Lokuo (his parent). And then again at this point in the cycle Deminan suffers the physical deformity caused upon his back when the shaman Bayamanako blows a wad of mucus on it. This experience nearly kills him. So you see the word "gravedad" here indicates "grave" physical peril to each one of the various protagonists (heroes) of  the stories.

6.) Yes..."matutino" means dawn and "vesperino" means evening. It refers to Venus appearing as either a morning star or as an evening star. This coincides with the well-known interpretation of the Venus cycle in Maya mythology which includes the adventures of the famous hero twins HunAhpu and Ixbalamque.

I am trying to tanslate this into English and have some clarification/translation questions:

1-2nd circle from outside:Roza- does this mean slash and burn (agricultural term)?

2nd circle from outside- Why is corn the only plant harvested (I see corn being planted twice in this circle, yuca planted once, but no harvest of yuca mentioned)

3-In the Deminan cycle what does the word Arcoiris mean?

4- in the Deminan cycle how would you translate heroe gravedad (serious hero?)

5- in the Deminan cycle what does Correrias Mitica mean? (mythical what?)

6- In the Guahayona cycle- does matutino mean dawn and does vespertino mean dusk (in regards to venus)?

7- In the Guahayona cycle does hambrientos mean hungry? (the crying children)

8- In the Yayael cycle- Does Sirio mean the star Sirius? If yes, why is it listed twice?

To understand this graphic analysis first one must be able to read Spanish. Then the sequence of cycles is perceived to begin at the center with Yaya the supreme being composed of the balanced combination of male Yokahu and female Atabey being the origin of all. Instead of following that with the cycle of Yayael as Robiou-Lamarche presented, we have created the first circle out from the center as the cycle of Guahayona just as Pane recounted it. This cycle begins at the top of this first circle, at the point of the arrow that contains the title "Cycle of Guahayona". Then the cycle circles counter-clockwise following the action of the story starting with the creation of Yaya Locuo who bears the name of the supreme being and who begins existance in the cave of Casibajagua, eventually accompanied there by other members of the human race. This is followed by the Macocael sequence and the sequence of the other unfortunate members of the cave community who are eventually turned into rocks, trees and birds giving rise to the three realms: the mineral realm, the vegetable realm, and the animal realm. After that the Guahayona cycle continues around toward the departure of the wayward culture hero as he absconds away from the cave taking all the women with him, an act that Robiou-lamarche accurately characterizes as a form of "rebelliousness" since he is committing a great wrong. At this point the cycle identifies the death of the abandoned children who are left to die by their mothers and then turn into frogs. That is then followed by the abandonment of the women in the the land of Matinino (the place with no fathers). At the bottom of the circle Guahayona gets rid of the usurper chief Anakakuya, who has assumed the kasike stool after Guahayona's departure. Anakakuya must be drowned by trickery before the chief's dujo stool can be recovered. The story now reaches the point where Guahayona gets sick and must be healed by the first bohiti, Guabonito. Then we can follow the circle up the right side of this circle as Guahayona receives the cibas and guanin, symbols of his leadership status from Guabonito and returns as legitimate kasike back to the cave community to redeem himself, resolving the problem of no women by devising a way to capture the mysterious forest beings and converting them into human women with the assistance of Inriri the woodpecker. It is significant to note that in his interpretation of this particular cycle Robiou-lamarche identifies Anakakuya as a legitimate chief and Guahayona as the first behike. We do not agree with these interpretations, identifying Anakakuya, instead with the illegitimate royal divinity of Maya culture SEVEN MACAW who is associated with the Big Dipper- Little Dipper-North Star constellation complex just as Robiou-Lamarche associates Anakakuya with the same constellation complex. In Maya mythology this royal divinity must be defeated and caused to fall into the sea by the culture hero just like Anakakuya must also be defeated and caused to fall into the sea by the Taino culture hero Guahayona. The second cycle is the next one out from the center after the Guahayona Cycle. It is called the Yayael Cycle. The cycle of Yayael must be followed in the same way as the inner Guahayona cycle, starting at the point of the arrow at the top that says "Cycle of Yayael", and followed around counter-clockwise all the way back up the right hand side where it culminates with the breaking of the funerary gourd where Yayael's bones rest and the spilling of the ocean waters from that gourd. The third cycle is contained in the third circle from the center. It is the cycle of Deminan. Again, this cycle begins at the point pf the arrow that contains the label "Cycle of Deminan", and folowed around counter-clockwise, following the story of the four quadruple twins born of Itiba Cahubaba at the top of this circle and ending with the emergence of the turtle from Deminan's back.