My Relatives, many of you recognize this song as the great chant to Atabey our sacred mother of the earth and the waters which we in the Taino Resurgence movement have been singing since 1982 when I composed it under inspiration of our Taino ancestors. This particular video shows me leading the singing of the song as part of a historic 1992 full moon ceremony of the CANEY INDIGENOUS SPIRITUAL CIRCLE in Pittsburgh, PA which was attended by the leaders of one of the very first yukayekes of the TAINO RESURGENCE MOVEMENT, the Taino Native American Association.

As I mentioned above, this song was composed under inspiration in 1982 by myself (at which time, according to the copyright laws of the United States, it began to be protected by the copyright laws of the United States). We have enthusiastically promoted the singing of that song among our Taino communities as part of the mission of our Caney Circle to share the ceremonial tradition of our ancestors to all of our people. We encourage other Tainos to sing it and use it in their ceremonies all over the world, wherever they may find themselves. We have selflessly spread the public use of our song to both Tainos and non-Tainos who respect our ways.

Of course we expect that if somebody uses our song in a context in which they will publish or make money from its use, in keeping with copyright norms that person ask our permission before they do it or at least give us credit for it.

For decades we had no idea that anybody was interested in our song except Tainos and we believed that this song was being sung only by people we knew or by people that knew others who we knew. We were very very wrong! In 1991  a woman named Guaba Guarikoku (Spider) recorded the song and released it with our permission as part of a companion audiotape which was designed to accompany her recently published book "SONGS OF BLEEDING". The audiotape contained several songs of the Caney Circle which included this chant to Atabey as well as some songs from other traditions that were pertinent to the theme of the book which was Indigenous women's spirituality from various Native tribes. Spider clearly credited me as the author of the song and also clearly marked the tape with the well-known (c) copyright symbol of the lower case "c" surrounded by a circle and accompanied by the date 1992. Spider's tape was marketed under the name of the book "SONGS OF BLEEDING" and was sold internationally along with the book. 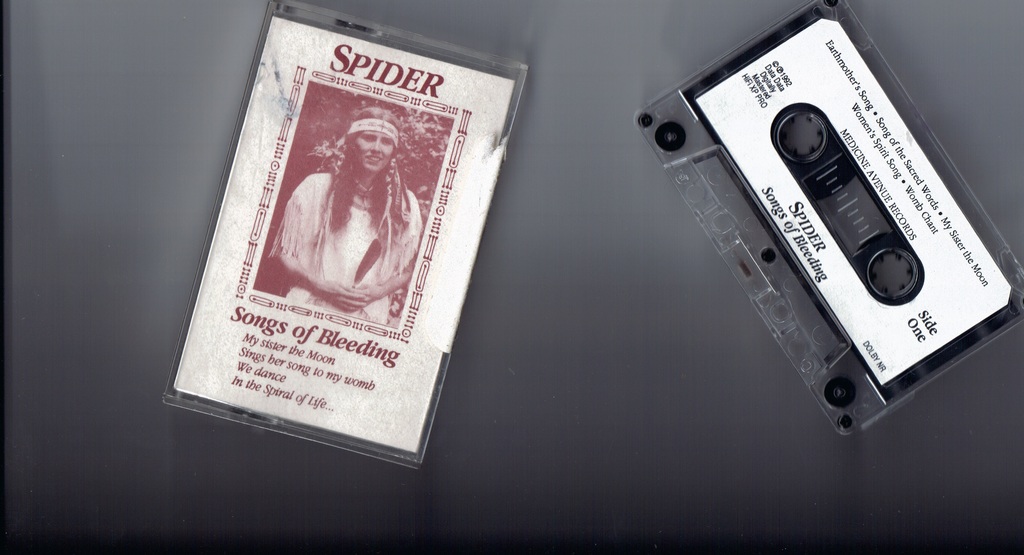 Around the time that we first released  the song publicly a German children's music promoter, Pit Budde heard Spider's tape while visiting Canada and he liked our Atabey song. Pit Budde understood that the song was dedicated to Mother Earth even though much of the lyrics are in the Taino language so he composed a set of German lyrics "Fur Die Erde Singen Wir" (We sing to the Earth Mother) and then released the song in his country in both German and also in the original Taino language lyrics that I had created in 1982. He called his version of the song "TAINO TEE", using the first two words of the song.  Mr. Budde has stated that when he released this song in his cd in 1992 he was not aware that it was composed by me and that I owned the copyright to the melody and to the Taino language lyrics.  He has stated that he thought this song was an old traditional Taino Indian chant and was therefore in the public domain. That is why he did not ask our permission to copy our song and release it publicly, and we had no idea that he had done that. The song was a hit! It was sung by thousands of German children and even children of other European countries for years. He sold a lot of tapes and cd's with our song throughout the decade of the 1990's and even into the twenty first century and we had no idea any of this was happening! 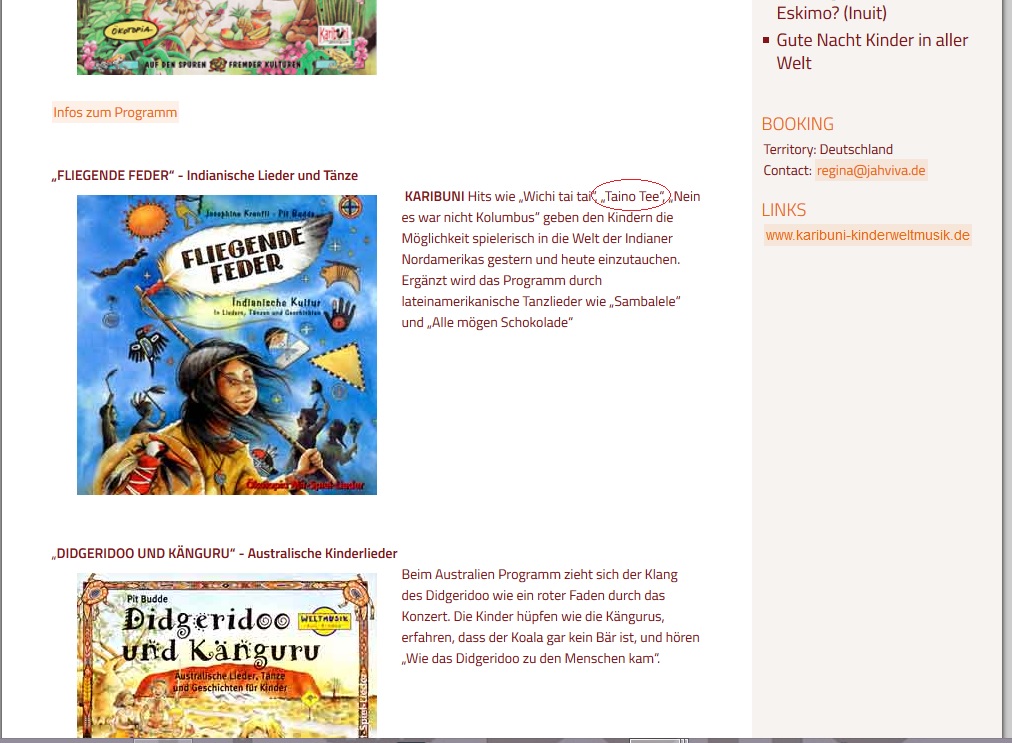 This is a screen shot of the online publicity for the cd album Fligende Feder (Flying Feather) Pit Budde's children's music band Karibuni-Weltmusic Fur Kinder, which included our song under the name "Taino Tee" as seen in the circled image above.

This artist has promoted our song on youtube and also on tik tok.

These are screen shots of the official listing of our song in the Karibuni website: Fast forward to 2013... while I was surfing the internet one day I discovered a video in Youtube uploaded by another German man, Klaus Stezenbach, also interested in children's music. He had posted a compilation of three Native American songs which included our chant to Atabey. The video is extremely professional in nature and the song is beautifully interpreted by a Scottish singer. I was extremely surprised and began to reach out to Mr. Stezenbach in a very respectful manner, trying to inquire as to the history of his posting and informing him that this was our song, I did that for three years. I never got a response from him.

Eventually I realized that Stezenbach had given credit for the song to Pit Budde. I reached out to Pit Budde and he was extremely gracious in his response, offering to change all public and online exhibitions of the song to give me and the Caney Circle credit for it.

Later on I realized that the Pit Budde version of the song had been so successful in Germany that there were many videos on youtube presenting different interpretations of our song, some of them showing crowds of children singing it in both German and in Taino, and even dancing to it dressed up like "Indians". None of these people posting our song on Yutube ever gave us any credit for it. Some of them only credited Pit Budde and several of them were earning money in the use of the song.

There is even an online Yoga Kirtan of our song being offered online.

Generally I have not perceived any of these uses of the Caney Circle Atabey song as offensive because of the fact that many are innocent individuals, especially children, who are essentially enjoying the sacredness of the song. I frankly see no harm done by these various videos. However it is irritating to see in most of these youtube videos that Pit Bidde is given credit for a song that I wrote and that is legally copyrighted under United States and international law. It is also irritating to see that there are other online vehicles that promote our song and its lyrics without giving us credit for it. Our copyright is dated back to 1982 when I created the song. I continued to maintain an on-going cordial interaction with Pit Budde in the hopes to see the changes that he promised me. I strongly admire the work that Mr. Budde and his ensemble Karibuni has accomplished in behalf of racial and social justice all over the world. I firmly believed that he would eventually give us credit for our song on his website just like he did with Jim Pepper's Wichi Tai Tai, with David Campbell's No, Not Columbus and with Lindbergh Namingha's Grand Entry.

In February of 2021 Mr. Budde finally registered our song in the German national song registry organization G.E.M.A. giving me credit for the authorship of the song:

The listing  erroneously lists my name as Miguel Angel Sague III which is not my real name but my son's name. We are working on fixing that error but we are thrilled that my name finally appears in the authorship listing of the song.

Anyone can access this info by logging into the GEMA  online Repertoire search site and enter the words "TainoTee" in the search window.