My Participation In This Year's MIDWEST SHAMANIC GATHERING Sept 2012

I was honored this year to be invited to offer ceremonial presentations at the 2012 celebration of the MIDWEST SHAMANIC GATHERING September 1, 2 and 3.

The invitation came from Ohio-based wise woman Mary Lou Swogger of the Eagle Condor Foundation of Minneapolis, Minn which sponsored the event.

I had met her while attending a traditional Shipibo Indigenous ritual with her near Erie, PA, officiated by Peruvian elder Don Valerio (Freddy) Cohaila several years ago. Freddy has worked for years with the Shipibo Indigenous people who live in the Amazonian rainforest region of his native Peru and he shares that tradition as well as the tradition of the Andean mountain Inca descendants who also live in his country. I have always had a singular interest in the Shipibo people since they are from the South American rainforest region which gave rise to my own Arawakan-Taino culture and since they produce an enigmatic artwork which is mezmerising and beautiful.

I attended the three-day event at the Beaver Creek state-administered campground near the town of Eau Claire, Wisconsin over the Labor-Day weekend which was blessed with the most beautiful weather all three days and nights allowing us to enjoy, on each night, the blessing of the incredibly bright Full (Blue) Moon that had been shining since the last day of August.

I arrived on Friday evening and almost immediately was treated to a wonderfully healing Anishinabe-style sweatlodge ceremony near the sacred tipi of the encampment. The ceremony was led by holy man Dan who is one of the elders of the Eagle Condor Foundation. 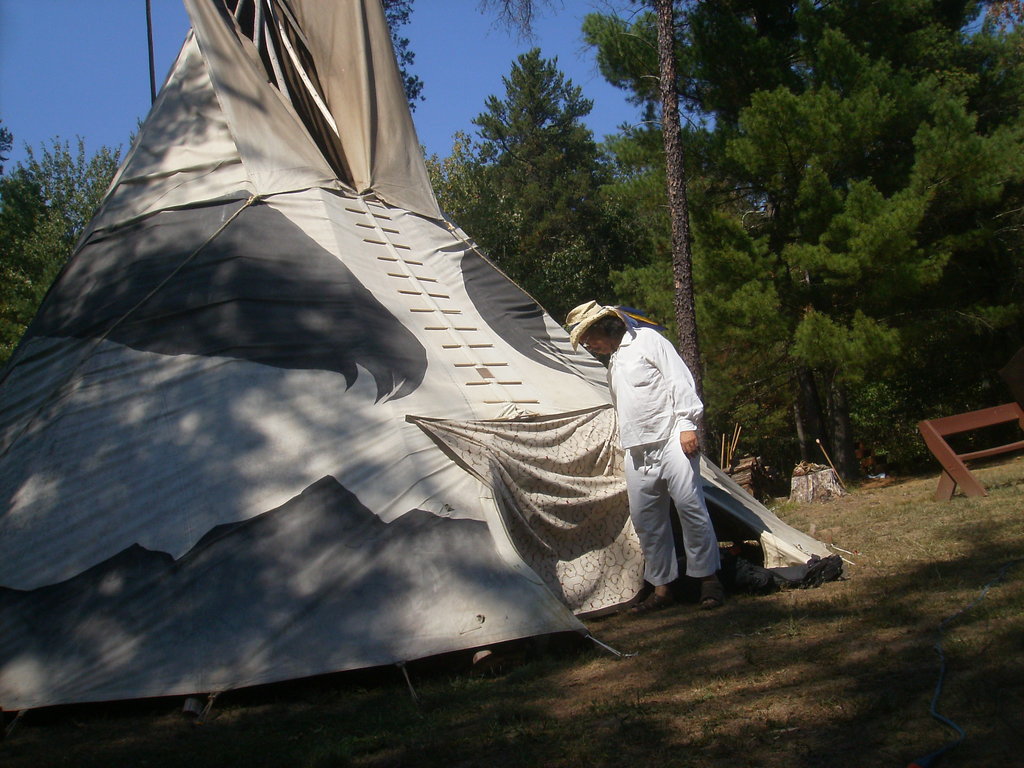 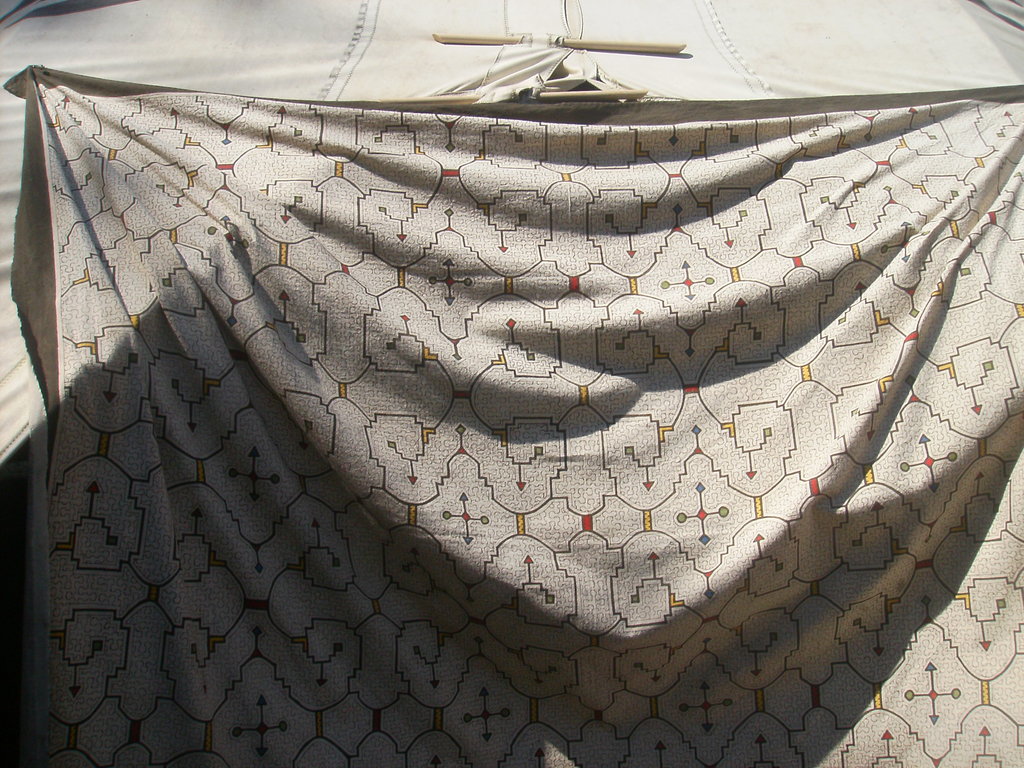 note the beautiful hand-crafted Shipibo fabric brought by Elder Freddy from the Amazon and utilized as tipi lodge door cover.

That same evening I had the pleasure of meeting Guatemalan Tzutujil Maya elder Tata Pedro Cruz of the UNIFICACION MAYAsacred community, and his wife the wise woman Shuni. The opening ceremony on Saturday morning was moving and evokative including songs by a traditional drum group led by Anishinabe elder Dan and a powerful Andean-style Inca Indigenous ceremony by Elder Don Valerio (Freddy) called a "despacho". 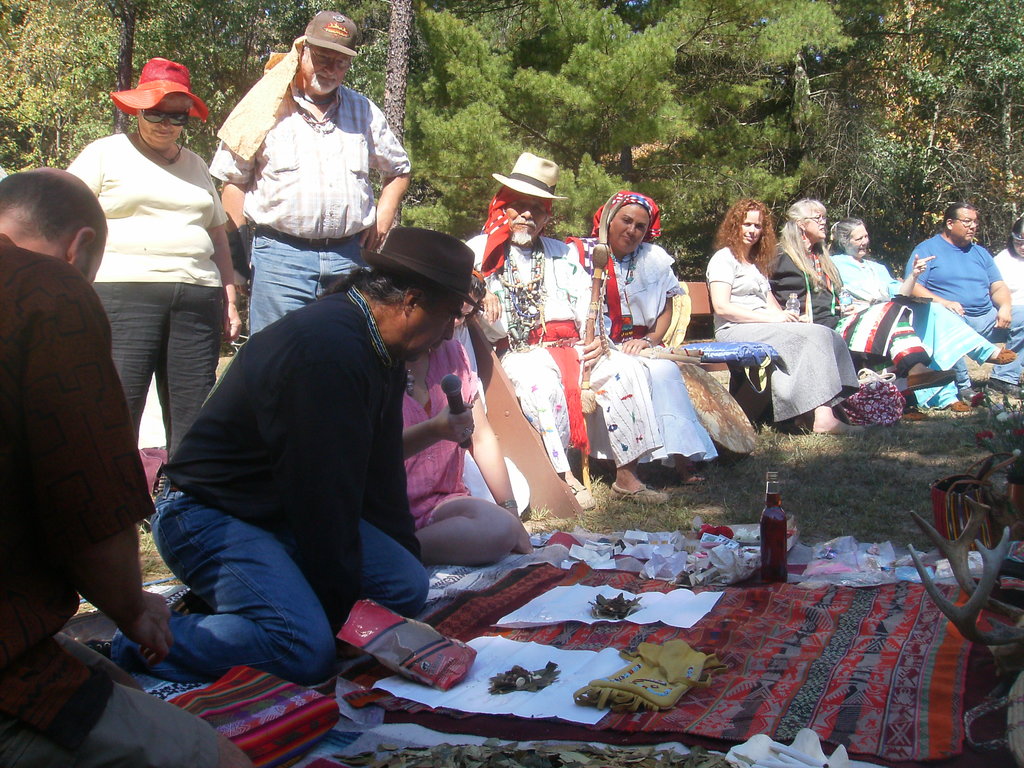 Saturday morning's Opening Ceremony was followed by lunch and then afterwards a wonderful variety of workshops and demonstrations by elders and guides from many traditions of the world. I was fortunate that Shuni, Tata Pedro's wife and I agreed to present our two demonstrations jointly so I had the opportunity to present my demonstration on the ancient Maya 2012 Long Count to a large group of people. I began my presentation by relating the Taino sacred narration of Guaguyona, the women of Cacibajagua cave and Guabonito. It demonstrated an element of how the negative energy of  a power-hungry authoritative male who causes the loss of balance by disrupting the energy of the female in the human community can throw the whole community out of balance. This, of course is one of the central themes of our 2012 message from a Taino perspective, and the lesson that the energy of the human female with its healing capacities (symbolized by the healer-woman Guabonito) must now during this era of transition again be brought to balance with the energy of the male in the global community. 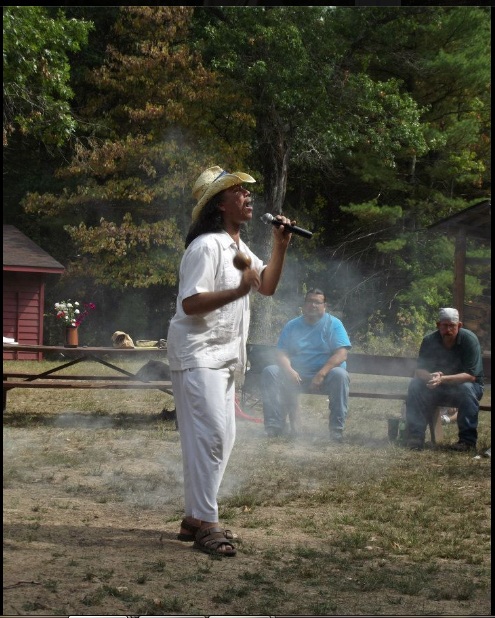 My presentation was immediately followed by Shuni's demonstration on the Maya Tzolkin day-countand how to follow one's unique spirit path using this sacred treasure. That evening we all participated in an overwhelming Maya fire ceremony led by Tata Pedro. 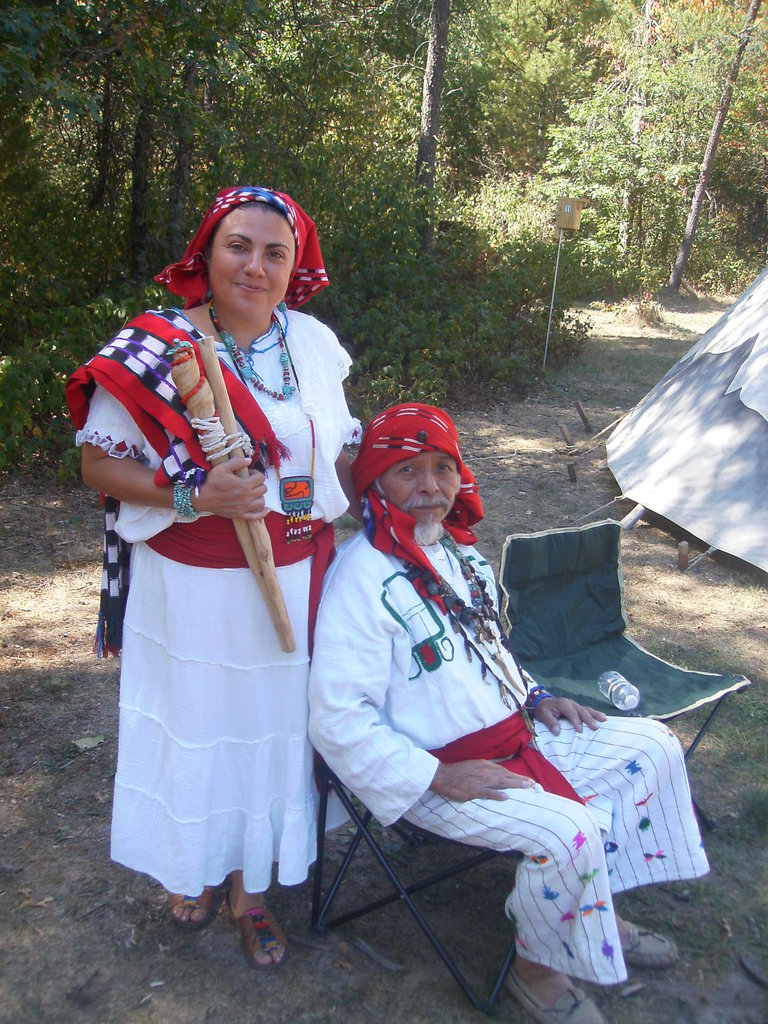 The evening was filled with wonderful exchange and informal interaction among both presenters and participants. I had an opportunity to get to know Hilda, a marvelous Taina from Boriken who now lives in Maine and who demonstated interest in the tradition of our Caney Indigenous Spiritual Circle and our United Confederation of Taino People tribal community. 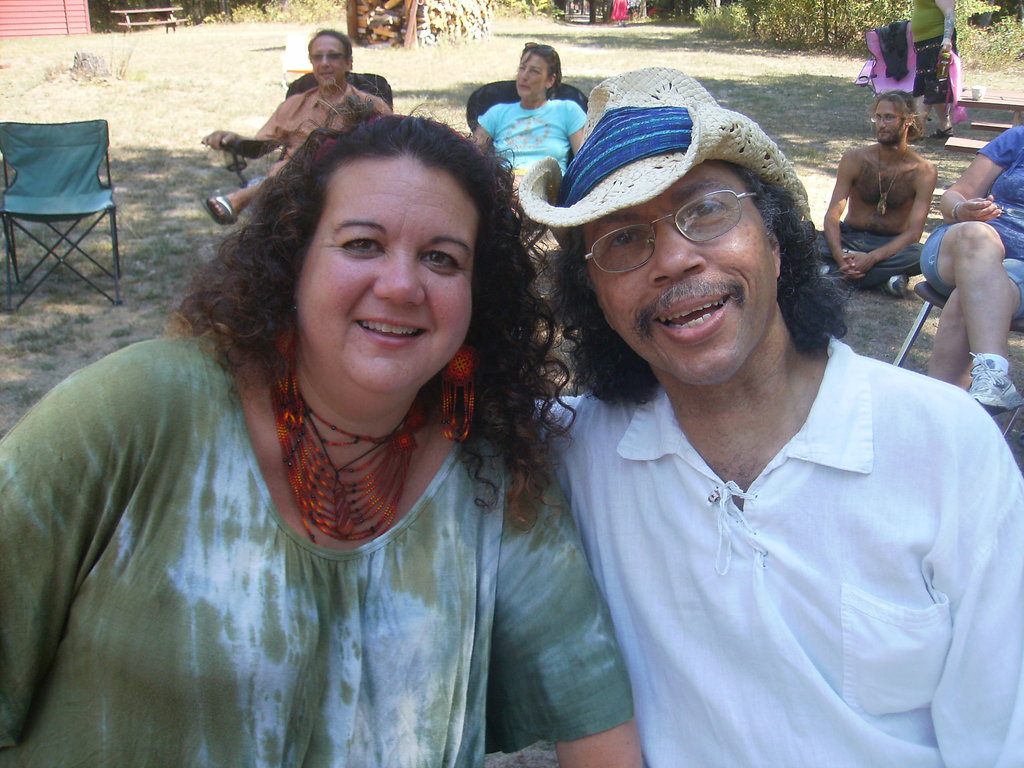 The following day, Sunday we began the day with morning and sunrise ceremonies of different types, followed by a great deal of warm interaction and sharing through breakfast and lunch. In the afternoon I offered my second presentation, a demonstration of the Taino shamanic tradition which began with a group guaitiao dance in which pretty much all the attendees participated either as drummers or as dancers..."Guaitiao guariko aruaka guakia!!!".

The dance was followed by a relating of the Taino sacred narration of Deminan Caracaracol and the shaman Bayamanako.  This introduced the attendees to the Taino perception of the power of the shaman to draw out of a person his hidden qualities like Bayamanako drew out of Deminan the sacred hidden turtle of compassion that had always dwelled within him all along repressed by the youth's arrogance.

It was wonderful to see how well received these messages from the sacred Taino narrative tradition were by people from all walks of life and from all ethnic backgrounds.

On Sunday evening I had the pleasure to experience a screening of the new documentary by Shannon Kring Buset, 2012: The Beginning which coincidentally features no less than five important chroniclers and teachers of the 2012 meme all of whom I have worked closely with: The noted author of the epochal book MAYA COSMOGENESIS 2012 John Major Jenkins, the accomplished archeologist, epihrapher and Mayanist Ed Barnhart. the Yucatec Maya teacher and spiritual guide Ac Tah, The K'iche Maya elder who was one of the officiators at the ceremony for our group in K'umark'aj Guatemala during our 2011 pilgrimage  to the sacred sites in the Maya highlands, Tata Jose Soc, and of course Tata Pedro Cruz, with whom I collaborated during this Midwest Shamanic Conference and with whom I established a powerful connection this past weekend. 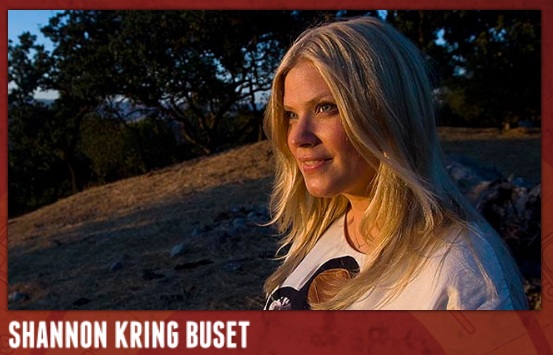 Shannon's film is, in my opinion one of the most concise and accurate documentary expositions of the 2012 phenomenon and merits the praise of anyone who is seriously interested in this prophecy. I had the unique pleasure of meeting the film-maker after the screening of her movie and was touched by her genuineness and approachability.

On Monday after sunrise ceremonies and meals we all participated in a round-table discussion and group exposition of ideas and opinions concerning the gathering and its 2012 theme in the main classroom of the campground. 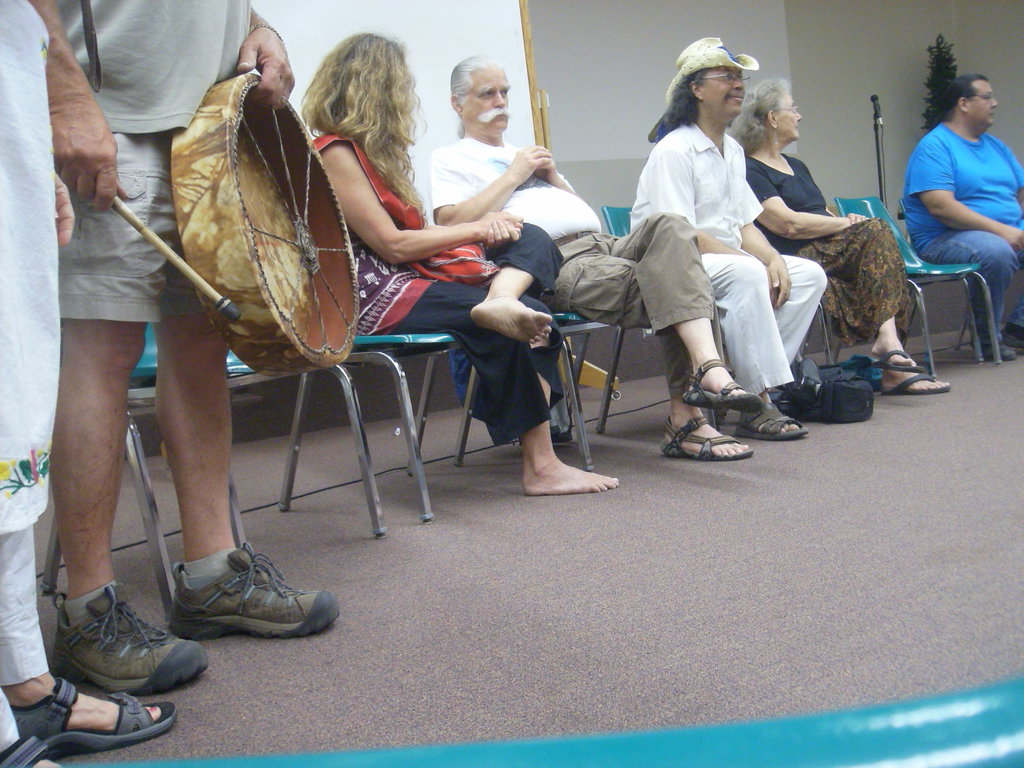 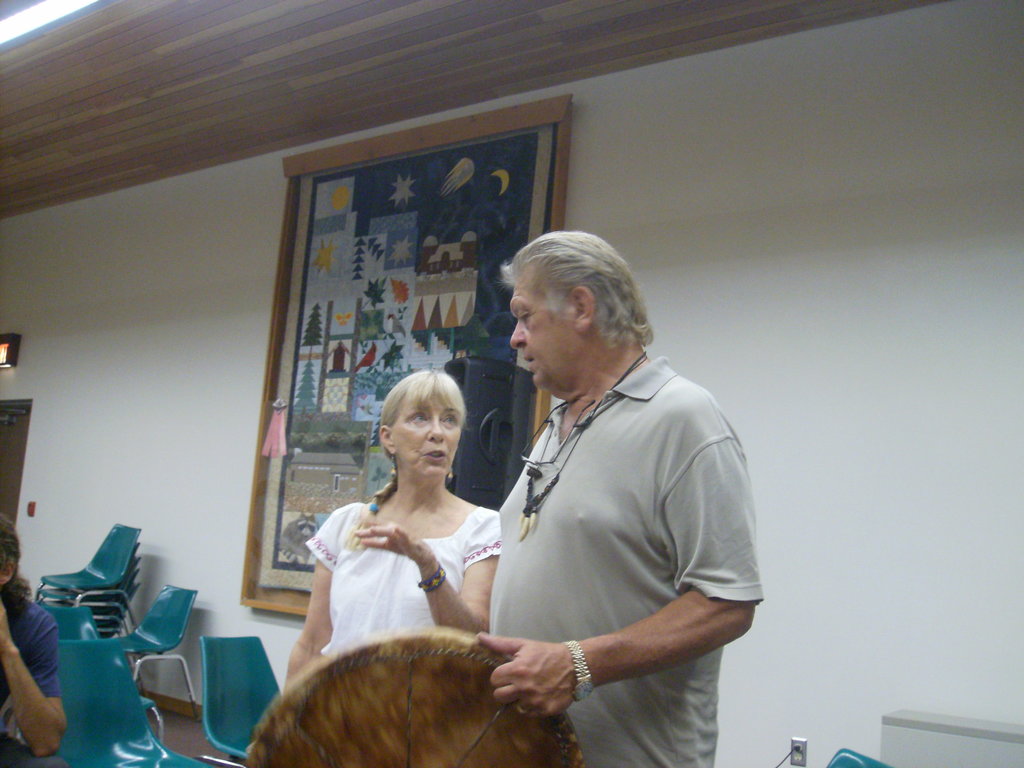 It has been an unique pleasure and honor for me to have participated in this endeavor and I loook forward to many future collaborations between myself, along with our CANEY INDIGENOUS SPIRITUAL CIRCLE and the enlightened organizers of the EAGLE CONDOR FOUNDATION which was responsible for sponsoring it.