The Meaning of Autumn Equinox In behalf of myself, my family and the whole Caney Indigenos
Spiritual Circle community I want to wish all of you a blessed
Autumnal Equinox next weekend.
This season represents a special stage in the ceremonial cycle of
the cemies as seen from the perspective of the Caney Spiritual
Circle. We believe that Yoka Hu, the male spirit of Energy and Life has a Life-Cycle just like any living entity. We believe that YokaHu is born of his Earth-and-Water Mother, Ata Bey, at Spring
Equinox. He rises to full maturity and strength at Summer Solstice
and then decilnes during the stormy, hurricane-blown weeks at the
end of the summer season to finally die at the Autumnal (Fall)
Equinox.

The Autumnal Equinox represents the moment when our beloved Life
Spirit, Yoka Hu begins his journey to the realm of the dead. He
descends to the watery underworld at the center of Ata Bey's womb
called "Coa Bay", a place that can be accessed spiritually through
sacred caves. Yoka Hu goes there to be finally re-united as a
germinal embryonic being with his mother's uterus.

The watery realm of Coa Bay is also associated with the round spherical interior of the tropical higuera gourd.

An ancient Taino legend in which the bones of a dead youth interred in a gourd turn into sea-water and fish indicates the way in which ancient Tainos idenfied the higuera with the watery underworld womb of Mother Earth.

At Winter Solstice, this powerful male spirit overcomes the rigors of Death
and Hardship that characterizes the hurricane-driven late Summer and
Fall. There he awaits rebirth during the dry Winter months, a period
of time which, in the Caribbean, hold very little rainfall and
constrain the ability for plant-life to regenerate. Finally in the
Spring Equinox Yoka Hu is re-born from his mother's womb and the
cycle begins all over again.

We in the Caney Circle recognize two major ceremonial dates during
this season of Yoka Hu's transition and crossing-over:

The first ceremonial date is the date of Fall Equinox itself,
usually around the 20th or 21st of September. That is the actual
date when Yoka Hu dies and crosses over. Yoka Hu is an agricultural
plant spirit (his name means "Soul of the Yuca Plant"), a spirit
that represents the natural life-cycle of a plant, from cultivation
to harvest. The soul of the Taino's most important food item, Yoka
Hu, is the very spiritual manifestation of LIFE iteself because Life
depends on the success of the yuca harvest. When the yuca plant is
harvested it dies and in death it manifests its ultimate destiny, to
feed the people. This moment of destiny is actually the
manifestation of sacred personal sacrifice, a concept that plays a
very important role in ancient Taino spirituality. The fact that the
living of one generation eventually die to contribute to the success
of the life of the next generation is a central ideological concept
in the cyclical configuration of the spiritual mentality of our
ancestors. We honor our Lord Yoka Hu on this day for his personal
sacrifice and thank our Lady Ata Bey for her generosity in offering
us the product of her ever-fertile womb, the nurishing gift of
divine Life, the fruits of another year's harvest. During this
season of storm and death we recognize the fact that the sacred
cycle is completed and that this completion, harsh as it may seem,
is the moment when the slate is wiped clean to make room for a new
story, a new adventure of Life and Energy.Please refer to the pages
in the website of the Caney Indigenous Spiritual Circle that deal
with the Equinox Ceremony of the Caney Circle:
http://caneycircle.owlweb.org/equinox.html

The second ceremonial date that emerges during the Fall season takes
place at the beginning of November, on a date that we now call "DAY
OF THE DEAD". That day signals a moment when the living render
respect and tribute to those who have made the same journey upon the
same road that Yoka Hu now finds himself, to the realm of Coa Bay.
On the holiday of Day of The Dead we honor the ancestors and other
departed loved ones who dwell in Coa Bay. We eat guayaba (guava
fruit) in all of its manifestations. We offer the guayabe fruit to
the hupias (spirits of the dead) by putting bits of guava or guava
paste in front of the memory tablets that we keep to honor our
departed ones. Memory tablets, as maintained by followers of the
Caney   Spiritual Circle, are small vertical wooden boards which
support a shelf on the lower end and a hook at the upper end. The
shelf on the lower end of these wooden boards in turn support a tiny
clay bowl that represents the clay bowls that ancient Taino people
used to bury the skull of their dead relatives under their houses.
The hook at the top of the memory board supports the set of cords
from which is suspended a tiny gourd that represents the gourds used
by the ancient Taino to hang the long bones of their dead relatives
from the rafters of their homes. 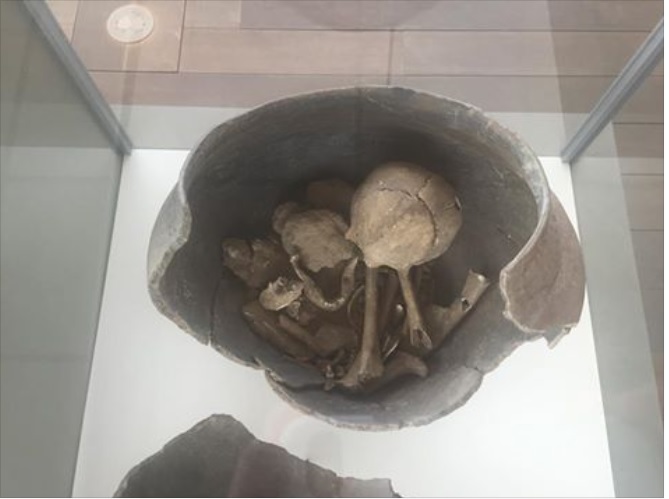 This is an actual burial arrangement discovered on the island of Aruba. It is composed of a large clay pot which contains the skull of a deceased individual. It also contains other bones of the departed person.